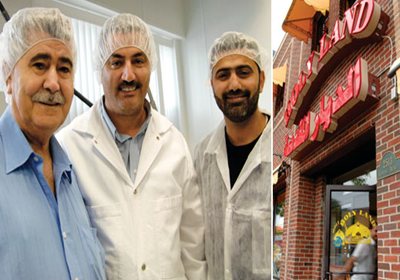 Hummus for the Masses

How Holy Land is expanding and rejuvenating commercial corridors in Minneapolis.
August 11, 2009

Majdi Wadi was distraught in the wake of the September 11 terrorist attacks eight years ago. Most people were. But to understand Wadi’s particular grief and worry, you’d have to know where he’s come from, how he’s grown a $10 million business selling Middle Eastern foods, and the future he saw hanging in the balance.

Wadi’s business, Holy Land, was a small but popular restaurant, deli, grocery, and bakery on Central Avenue and Lowry Avenue in Northeast Minneapolis. It still operates there, in bigger quarters now. Holy Land catered to the city’s growing Muslim population, but it had a healthy following among Twin Citians generally. Would they turn on the Arab-owned business?

“I cried because I thought we might have to pay the price for the ignorant actions of the terrorists,” Wadi says. Holy Land did get a bomb threat the day after the attacks, and he wondered whether to open for business. He gave his managers the option of staying home and still getting paid. “But I decided to show up with my kids and my wife and my parents, because if we didn’t open the store, that means that we allowed those cowards to achieve their goals.”

What awaited Wadi the next morning brought more tears, this time of relief and gratitude. “It was amazing, the amount of flowers and cards that people had placed in front of the store,” Wadi says. “That day, September 13, was and still is the busiest day in the history of Holy Land. People came from all over Minnesota to show their support for us, not just Arab Americans but all Minnesotans.”

Not exactly conventional market research. But the experience did reinforce for Wadi the idea that Holy Land’s market is a broad one, and that its potential for growth is far reaching. Eight years later, he’s finding more ways to tap that potential.

Majdi Wadi was something of a latecomer to the business, which his older brother, Wajdi Wadi, started in 1987. A recent graduate of Minnesota State University–Moorhead, Wajdi bought a small corner store called Ali Baba that served Middle Eastern food, and at the same time bought mobility for his family.

He renamed the business Holy Land to honor a grandfather who’d had a bakery in Jerusalem. Three years later, in 1990, Wajdi was able to bring his parents over from Kuwait, and his mother helped him develop recipes. Four years after that, Wajdi called his brother, Majdi, who was running a similar business in Jordan, and asked him to come to Minnesota: The building two doors down from Holy Land was for sale; Wajdi was ready to buy it and expand.

Majdi Wadi explains the significance of the opportunity with a recounting of family history. “When my dad was 16, he was kicked out of Palestine after the 1948 war,” he says. “He was one of 19 people who began walking to Kuwait; after three days in the desert, only nine made it there alive.” In Kuwait, Wadi says, his family was treated as second-class citizens. He found the same bias against Palestinians when he moved to Jordan after high school. “In all those countries, you have no right to breathe. No matter how smart you are, there is always a limit you can’t go beyond unless you belong to a certain family or group.” He adds, “In this country, beyond the sky is your limit.”

Majdi arrived in Minnesota in December 1994, rolled up his sleeves, and went to work. For the first five years at Holy Land, he put in 18-hour days, seven days a week. By 2000, he was running the business himself; Wajdi Wadi was spending more time back in the Middle East, cultivating a network of suppliers from which Holy Land could import products like juices, olive oils, and dates, and educating them about U.S. food regulations.

Like his brother before him, Majdi Wadi worked to expand Holy Land. To its tiny business wholesaling to Twin Cities food co-ops, he added local grocery store sales of pita breads and hummus in 2000, starting with Kowalski’s and Whole Foods markets. That year, he also bought a television store adjacent to his business, converting it to house Holy Land’s grocery and bakery, which made more room in the original building for the restaurant and hummus manufacturing line.

And here’s where the story of Holy Land and the Wadis departs from that of many successful, immigrant-owned small businesses: The City of Minneapolis celebrated the opening of the newly renovated addition with a ribbon-cutting ceremony on August 21, 2002. Mayor R. T. Rybak issued a proclamation naming the day “Holy Land Bakery & Deli Day.”

“Holy Land is the heart and soul of Central Avenue—it’s a fantastic company with a fantastic leader,” Rybak says today. “Central Avenue has a great history, but it’s seen some tough times. But it’s the next Lake Street, reborn after a period of commercial decline, in large part because Holy Land has helped spur a remarkable revitalization.”

It turned out that the Wadis’ arrival and expansion on Central Avenue had coincided with a worrisome period for the neighborhood.

“It was in the late ’90s when many of the residents and civic leaders in Northeast got very concerned about what was happening on Central Avenue,” says John Vaughn, executive director of the nonprofit Northeast Community Development Corporation. There were empty storefronts. City business corridors were losing customers to suburban big boxes. “A lot of businesses that had been family businesses here since the ’40s and ’50s were closing their doors.”

Vaughn adds, “It’s fair to say that Majdi played a huge part in keeping Central Avenue from declining any further than it did in the late ’90s.”

He says Wadi’s efforts to grow Holy Land generated jobs, property tax revenues, and foot traffic. Surveys done by Vaughn’s organization in 2005 and 2009 showed that “Holy Land is a regional destination,” he says—one of the top two most-frequented businesses along Central Avenue (Walgreen’s is the other).

Beyond that, “one thing that a lot of people don’t know about Majdi is that he’s a one-man small-business incubator,” Vaughn says. “There’s been a lot of start-up businesses that have gone to him for help and even financing. And he’s always willing to help other people.” Wadi gave advice and encouragement to owners of a nearby travel agency and the neighborhood’s Crescent Moon Bakery and (now closed) Adam and Eve clothing store, among others, Vaughn says.

Starting in the late ’90s, the Wadi family also invested in residential and commercial property in nearby neighborhoods. Majdi Wadi says those holdings now include five commercial buildings totaling about 25,000 square feet and 10 residential properties with about 31 rental units.

Wadi “has invested millions of dollars in Central Avenue,” Vaughn says. A grateful city took note—not only at that 2002 ribbon cutting, but in 2006, as Minneapolis sought to develop and open the Midtown Global Market in the former Sears Roebuck & Company building on Lake Street and Chicago Avenue South.

Holy Land’s position as an anchor tenant “was critical for the Global Market on day one and it’s remained critical,” says Mike Temali, the market’s president and CEO. “Three years ago, I had a vision of getting other large anchors all under one roof, which would create a buzz that would bring in enough folks to get Global Market off the ground. Of that list, only Holy Land was willing to come here.”

Wadi opened a store in the market against the judgment of his accountant and other advisors, who believed the neighborhood was too crime ridden and rundown to be promising or even safe. For more than a year, he lost $7,000 to $10,000 a month at his Global Market deli and grocery store, finally turning a profit last year and adding a halal meat market for customers who observe Islamic dietary laws.

Temali says he’s grateful for Wadi’s tenacity and commitment to the city. Wadi says, “It took two years to break even at Global Market, but the knowledge and experience I learned was priceless.”

He’s applying that knowledge to more expansion plans for Holy Land. Wadi is preparing to franchise the business, and is seeking an investor to work with him. “I don’t want to make Holy Land a fast-food restaurant,” Wadi cautions. “We’ll be supervising the first five or 10 stores very carefully to make sure they’re successful.”

Two years ago, Holy Land began exporting its pita bread to Singapore and the Far East, but had to stop last year, when the rising cost of flour made it impossible for Wadi to price his product competitively in those markets. He’s working this year to re-establish his relationship with his Asian distributor.

Holy Land’s wholesale business—limited for now to local grocers—is also in his growth plans. Holy Land now sells to Cub Foods, Lunds, Byerly’s, Kowalski’s, and Whole Foods. Wholesaling accounts for 20 percent of revenues for Wadi’s $10 million parent company, Holy Land Brand. (Restaurant sales bring in another 20 percent, catering and meat sales 20 percent, and groceries 40 percent.) But Wadi is beginning to talk with U.S. distributors about a national rollout of Holy Land pita breads and hummus, and has visions of expanding the brand to include spices, olive oils, and other products.

“Those plans are on hold right now due to cash flow,” Wadi says. “With this economy, I have to defer my dreams. After our last expansion, we owe the bank $5 million.”

That last expansion was close to home. In 2007, Holy Land purchased two more Central Avenue buildings. One of them, nine blocks down from the company’s current location, had stood vacant for more than five years. Wadi brought it up to code and moved Holy Land’s bakery there in January this year.

Holy Land’s other purchase in 2007 was Sully’s Bar, right next door to the original store. Community business owners and residents worried that Sully’s was bringing drugs and prostitution into the area. Wadi was determined to rectify the situation, especially after his own mother was attacked by a drunk while walking to the nearby Walgreen’s. “I flew to Vegas and struck a deal with the owner of the building,” Wadi says. “I paid $300,000 above the market value because he charged me for the liquor license, which we destroyed and did not use because of my personal and religious beliefs.”

Wadi transformed the bar into Holy Land’s new factory, which opened in May this year and makes not only hummus but also baba gannouj and other appetizers and salads. The restaurant will soon move into the old bar building as well, separated from the hummus factory by a wall of windows so diners can watch the production line in action.

Overpaying for a seedy bar might not be the best business decision, but Wadi is driven by more than a desire to build his business. Like his ongoing commitment to donate 3 percent of his gross revenues to community causes, buying Sully’s was also a way to express gratitude.