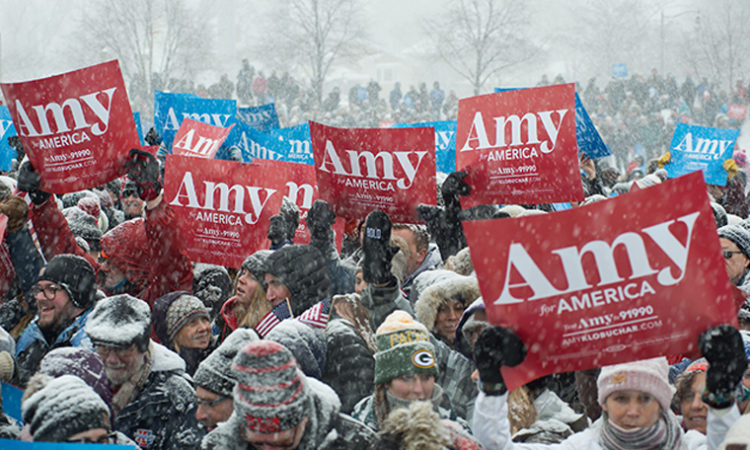 As the stateâs politics have become more polarized along urban-rural lines, even Klobuchar has lost support in Greater Minnesota. ( Photo by Bill Kelley/MinnPost)

How Popular is Amy Klobuchar in Minnesota’s Trump Country?

Part of Klobuchar’s case to win the Democratic nomination for president is her ability to appeal to Trump voters. How strong is that ability?
By Greta Kaul
February 14, 2019

Minnesota Sen. Amy Klobuchar’s entrance to the presidential race Sunday turned presidential watchers’ eyes toward Minnesota for the first time since the 2012 election, when the state had the distinction of having two politicians — Michele Bachmann and Tim Pawlenty — seek the office.

There’s a particular reason some are watching Klobuchar, though, amid a crowding field of Democrats looking to get the party’s nomination next year: Her ability to run up big electoral wins in a Midwestern state that almost went for Donald Trump in 2016.

Democrats routinely win statewide offices in Minnesota. But not by Klobuchar’s margins. In three Senate elections, she’s bested her Republican opponents by double-digit margins, and the ability to win big in an increasingly purple Midwestern state has made some pundits say she might be the Democrats’ best shot to win votes in Trump Country.

But look a little closer, and that story gets more complicated. Yes, Klobuchar easily won re-election in 2018. But as Minnesota’s politics have become more polarized along urban-rural lines, even Klobuchar has lost support in Greater Minnesota.

Klobuchar has a track record of winning big. She hasn’t faced a close race since she first ran for Hennepin County attorney in 1998. In her re-election bid for the seat in 2002, she ran unopposed.

Then she set her sights on the Senate. Running for the seat formerly held by Mark Dayton, Klobuchar beat Republican then-U.S. Rep. Mark Kennedy by a comfortable 20-point margin. She won all but eight counties.

Running for re-election in 2012, she beat Republican state Rep. Kurt Bills by 35 points, outperforming Barack Obama’s margin by a factor of more than four. And this time, she won all but two southwest Minnesota counties (Pipestone and Rock) by double-digits.

But something seems to have changed by the time the 2018 election came around.

By-and-large, 2018 was a good year for Democrats in Minnesota. Tim Walz won the governor’s race with a commanding lead; the DFL kept Minnesota’s other Senate seat in Democratic hands with the election of Tina Smith, and Democrats took the state House of Representatives. Yet Klobuchar won with a smaller (though still substantial) margin of victory than in 2012: 24 percentage points over Republican Jim Newberger, a state representative who did not raise enough money or support to mount a serious statewide campaign.

She won 51 out of Minnesota’s 87 counties, losing patches she formerly won in southwestern, central and northwestern Minnesota. 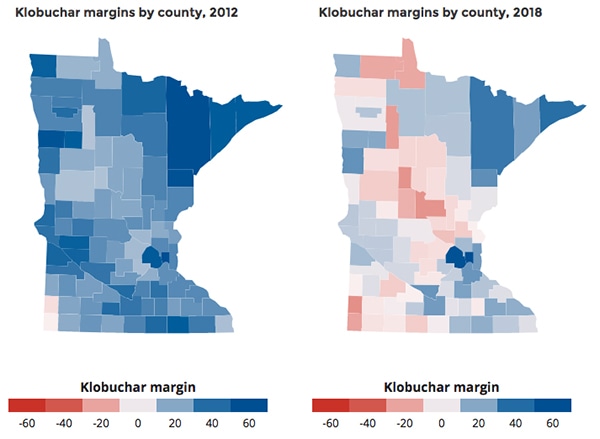 How could she do so well while losing support in Greater Minnesota?

The Twin Cities metro area usually represents about 55 percent of votes in the state, a growing share. In 2018, the metro suburbs swung to the Democrats hard, driving DFL victories in statewide races.

So yes, the national pundits are right that Klobuchar has shown Democrats can win in swing states. But moreso than past elections, her large margin of victory came from votes in the Twin Cities and its suburbs.

Tim Lindberg, an assistant professor of political science at the University of Minnesota-Morris, sees it as more of a Democrat problem than a Klobuchar problem.

“The Democrats did worse, ever since 2012, in rural Minnesota. They’ve been progressively doing worse outside of the Twin Cities area,” he said.

The divide in the electorate, with cities and suburbs leaning left, and rural areas leaning right, could provide both opportunities and challenges for Klobuchar.

Despite her loss of support in Greater Minnesota in 2018 relative to 2012, Klobuchar outperformed other Democrats outside the Twin Cities metro by a longshot.

She won 76,000 more votes than now-Gov. Tim Walz, and 86,500 more votes than Sen. Tina Smith, neither of whom ended up in particularly close races. She won 51 percent of votes in Greater Minnesota, compared to the 35 percent won by Hillary Clinton in 2016, who still won the state by 1.5 percent despite her unpopularity in the 45 percent of the state that makes up non-Twin Cities metro areas.

Of course, if she’s on the ballot in November 2020, she’ll face voters nationwide — not just those who know her best in Minnesota.

Then, Lindberg says, the question becomes “Is Klobuchar helped more by her persona as this moderate centrist that can bring together rural areas and urban areas and have common sense legislation, or is it more she’s a Democrat and (none of that) matters anymore?”