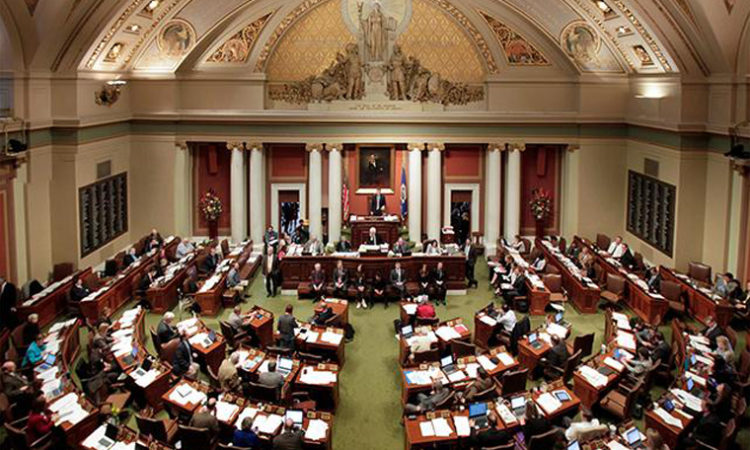 How Much Should it Cost to Run Minnesota’s Government?

Republicans' budget proposals represent a desire to halt what they call a “stunning” increase in the growth of state agencies over the last decade.
April 20, 2017

With nearly 40,000 workers, state government is one of the largest employers in Minnesota, and Mark Dayton is essentially the state’s CEO.

So it’s not surprising that the second-term DFL governor has drawn battle lines around what he sees as major cutbacks to state agency operations in the budget bills being proposed by legislative Republicans. Over the last several weeks, Dayton has trotted out a handful of high-level commissioners to lambaste those proposals, saying they would add up to hundreds of millions of dollars in cuts and would result in “thousands” of layoffs of state workers. Dayton’s commissioners have also sent a whopping 55 letters to Republican leaders and committee chairs listing their concerns.

At the center of the debate is the state’s $1.5 billion budget surplus. Republicans say the state is collecting more in tax revenue than it needs, and to make way for tax cuts, they’ve proposed trimming government across the board. Dayton, however, sees it as a more prudent investment to spend the surplus on the rising cost of government programs — not on permanent tax cuts. “In a [time] of a $1.5 billion budget surplus,” Dayton said. “They’re cutting state agencies as if there’s no consequence of them doing so.”

But the debate goes beyond the surplus. Republicans’ budget proposals also represent a desire to halt what they've called “stunning” increases in the growth of several state agencies over the last decade. All of which means that in order to finish the session by the Legislature's May 22 deadline, Dayton and Republican leaders will have to reconcile their diametrically opposed views on a core issue: the role of the state's bureaucracy.

Minnesota state government is a big operation, providing more than $40 billion worth of services each year and employing more than 38,000 workers between the judicial, legislative and executive branches. The executive branch makes up the bulk of those employees, who are spread among more than 20 different state agencies.

The state budget forecast projects it will cost over $1 billion in the next two years to pay for administering the state government. Dayton wants to up that to nearly $1.2 billion in 2018 and 2019, an increase that would go into staffing and wages for state employees and new cybersecurity initiatives, including $51 million for computer system upgrades and $74 million to boost security.

Republicans in the Legislature want to go in another direction. The House is currently proposing to spend about $943 million over two years on running the state government, while the Senate proposing about $996 million during the same time period.

Rep. Sarah Anderson, R-Plymouth, the chair of the House’s State Government Finance Committee, said the state bureaucracy has grown by about 1,000 employees over the last decade, far beyond what’s required to administer state government services. In particular, she points to three agencies as evidence of the growth of government under Dayton: the Department of Revenue, Minnesota Management and Budget (MMB) and the Department of Administration. Under her proposal, those agencies would take all the House's proposed cuts, with MMB taking the biggest share: a 23 percent reduction to its budget.

“It's more than inflation when you look at some of these agency budgets,” Anderson said. “Here you have a governor who is handing out golden parachutes to people who work in his administration. He is handing out severance packages like they are candy.”

To try and cut back on what she sees as administrative bloat, Anderson’s proposal would put a cap on how many full-time employees the executive branch can hire to the levels they had in 2013 and 2014. Anderson said the bill gives the state the “flexibility” to meet that cap through attrition, early retirement or staff cutbacks if necessary, she said. She also limits how much salaries can be increased for employees. “We are capping the growth of government to make it lean, smart and efficient for the taxpayers,” Anderson said. “Minnesotans are not looking for the surplus to be spent on growing government.”

In response, MMB Commissioner Myron Frans — who's been Dayton’s point person in the budget battle — has accused legislators of trying to micromanaging state government agencies. “We have been told regularly that the state should run more like a private-sector company,” Frans wrote in a letter to Anderson. “No private company that I know of, and I have run one, arbitrarily places a number on how many employees it requires. This micro-management hinders recruiting and retaining high-talent individuals that the state relies on for specialized services.”

What’s more, commissioners say, both citizens and the Legislature are demanding more from many of those same agencies. Department of Revenue Commissioner Cynthia Bauerly recently pointed out that the House budget bill would require her department to set up a new free online filing system for tax returns, which would cost about $22 million, at the same time it was proposing to cut $12 million from her budget.

Sen. Mary Kiffmeyer, R-Big Lake, said she knows what it’s like to head an agency facing cuts. Now the chair of the Senate's State Government Finance Committee, she was Minnesota’s Secretary of State from 1999 until 2007, during which time she once had to reduce her office’s budget by 15 percent. She couldn’t cut from the state’s election operations, so she had to make cuts to everything else across the board, including eliminating her own executive assistant. “It wasn’t easy to take that cut,” Kiffmeyer said. “But I think that is a sky is falling attitude is kind of blown out of proportion.”

Like many other budget bills this year, the Senate’s state government finance proposal falls somewhere between the House’s proposal and what Dayton wants. Kiffmeyer’s bill doesn’t cut state agencies' operations as deeply as the House, and she puts about $14 million into cybersecurity, much less than Dayton but more than the House proposal.

Part of the challenge in talking about the budget for running the state government is basic math. The three sides must first come to an agreement on the numbers before they can get down to specifics, a task that is harder than one might expect. Dayton thinks inflationary costs should be automatically worked into the budget when talking about state agencies, while Republicans are working off numbers from the last two-year budget period.

“When your kids get a $10 allowance and they ask for a $2 increase but you only give them $1, would you call that a cut?” Kiffmeyer said. “I think the governor does recognize that he is going to have to compromise. He’s going to come down. I think you see the House at a much deeper number than the Senate. I think we are a very sensible middle approach.”

For his part, Republican House Speaker Kurt Daudt said the agency budgets aren’t as far apart as they may seem, and is confident something can be worked out before the end of the session. “If you look at our budget bills versus the governor’s proposed budget,” he said. “We probably agree on 90 percent of state spending, certainly north of 80 percent.”