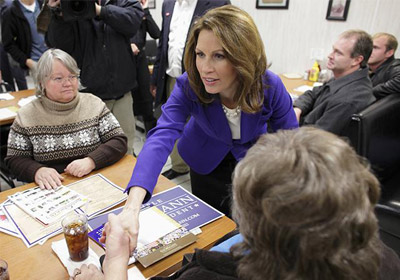 Representative Michele Bachmann has a stack of cash left in her congressional campaign account, with no obvious expenses left to spend it on.
November 23, 2013

WASHINGTON—When she retires from Congress next year, Representative Michele Bachmann will find herself in a spot many lawmakers do at the end of their political careers: sitting on a stack of campaign cash with no obvious expenses left to spend it on.

Bachmann, prolific fundraiser that she is, will likely have quite a bit more to pay down than most of her fellow retiring or defeated House members—she has $1.7 million on hand, as of September. The last handful of Minnesota U.S. House members to leave office had just fractions of that.

Source: Federal Election Commission
Campaign account balances for Oberstar, Gutknecht and Cravaack are the cash-on-hand figures from the post-general election reports for the year they lost re-election; for Sabo, it is the first quarter of 2006 (immediately following his retirement), and for Bachmann, her most recent FEC report.

Campaign finance experts say members have a wide latitude to spend that money how they see fit. Most donate it to other candidates or to a charity of their choosing, or they can convert their campaign account to one with an outside spending status. Others keep their accounts open and use it to pay for any future political activities they may undertake. About the only thing ex-lawmakers can’t do is spend it directly on themselves.

A Bachmann spokesman said she “has made no decision on her future plans” so no one knows yet which path she’ll take.

But Bachmann has already ratcheted down her spending. According to a MinnPost analysis of Federal Election Commission reports, between May 29, when Bachmann announced her retirement, and June 30, she spent about $475,000, much of it on the expenses required to run a campaign (direct mailing and telemarketing services, travel for staffers, etc.). Between July and September, she spent just $86,000, and she still has $1.7 million in the bank.

Since May, Bachmann has used $130,000 to pay down her presidential campaign debt (as of Sept. 30, that campaign still owes about $14,000 to Bachmann’s treasurer, lawyers and a media company). She also refunded $14,000 in old contributions from a Tom Petters associate to a bankruptcy trustee.

Meredith McGehee, the policy director at the Campaign Legal Fund, said there are not strict rules governing where the rest of that money can go.

The main rule is the prohibition on personal use: A lawmaker or former lawmaker can’t use campaign funds to pay for a country club membership, for example. But, McGehee said, they could use the cash to pay for a flight to the Super Bowl, as long as they’re sure to attend political functions while in town.

Ex-lawmakers often contribute their leftover cash to former colleagues to either buy influence or remain relevant in the political process. Lawmakers who move to lobbying jobs, for example, can keep their accounts open and donate to members of Congress through that.

“While there is a good bright line in terms of this personal conversion, there is still a myriad of ways that campaign contributions operate as political slush funds,” McGehee said.

The last few Minnesotans to leave the U.S. House have mostly used their accounts to pay down remaining campaign expenses and give to other candidates.

Republican Representative Chip Cravaack has spent about $31,000 of the $42,000 he had left when he lost his seat last fall. Most of that has come in the form of campaign donations: He transferred $15,000 to the Minnesota Jobs Coalition, a state political action group run by a former campaign consultant, and $4,000 each to Stewart Mills, the Republican looking to win back Cravaack’s seat, and Bobby Schilling, a former one-term congressman from Illinois running again in 2014.

How campaigns spend their balance

Source: MinnPost analysis of Federal Election Commission data
The last few Minnesotans to leave the U.S. House have mostly used their accounts to pay down remaining campaign expenses and give to other candidates.

Gil Gutknecht, who lost to Tim Walz in 2006, had only about $22,000 on hand at the end of that campaign. About half went to paying off campaign expenses; the rest he gave to a handful of candidates for the 2008 election, after which he closed out his account.

When then-5th District Rep. Martin Sabo announced his retirement in March 2006, he still had $270,000 in the bank. About $120,000 went to either his colleagues (he gave to 29 separate candidates or fellow lawmakers) or political groups. He closed his account after the 2006 election, giving what was left ($46,000) to Augsburg College for a scholarship fund.

Sabo said there wasn’t a solid strategy to how he donated. In fact, he said he had mostly figured that was just the way it was always done.

“I assumed that happened,” he said. “I can’t say I spent any great time pondering.”

Former Representative Jim Oberstar has done something a bit different with his leftover cash. Rather than paying it down quickly, he’s converted his campaign committee to what’s called a “non-qualified” account, meaning he can’t use it to wage any campaign on his own behalf but he can support others.

Oberstar left office in 2010 with about $327,000 in the bank (Cravaack beat him in an upset). Today, the campaign still spends about $5,000 a month, including $2,000 in salaries each to two former campaign staffers who still manage the fund and set Oberstar’s schedule, and for whatever various political activities he might do, like flying back to the 8th District for DFL events or for meetings at the National Democratic Club in Washington.

Oberstar’s given about $22,000 to Democratic candidates and causes, but not since 2011. Most of those candidates were either Minnesotans, former colleagues on the House Transportation Committee or candidates national Democrats said needed financial help, Oberstar said. He said his coffers will probably expire sometime next spring (he still has about $22,000 left in the bank).

Oberstar said he’s taken a mostly hands-off approach to managing the fund since he retired, leaving it to his former campaign treasurer and congressional chief of staff.

Obviously Minnesotans aren’t the only ones leaving office with campaign cash still banked.

In fact, the number of ex-lawmakers with big bank accounts (those with more than $100,000) has increased in recent years—there are 52 of them today, up from 18 in 1998, according to a report from the Center on Responsive Politics.

CRP’s money in politics reporter Russ Choma said there are a lot of potential explanations for this, including a recent rash of retirements from members jaded by congressional polarization. Primaries could play a role, too: Incumbent members who view themselves as likely to win an intra-party campaign tend to stockpile cash for general elections instead. (Choma pointed to former Delaware Representative Mike Castle, who ran in a 2010 Republican Senate primary as a heavy favorite, only to lose to a Tea Party upstart. Castle still has $755,000 left over.)

Choma said many of these former members consider themselves burdened by trying to figure out how to spend their leftover funds. Most end up getting rid of it pretty quickly, he said, often dolling it out to colleagues, party committees, foundations and the like. Others convert their campaigns into political action committees, which allow members to both raise and donate funds to help candidates or causes they support.

Then there are those who hold on to their cash, which, for certain ex-members, invites speculation about potential returns to politics. One Choma mentioned was Massachusetts Democrat Joseph Kennedy II, who has $2.3 million in a campaign account even though he’s been away from Congress since 1999.

“If they’re harboring any ambition for another office at some point, they hang on to it,” Choma said. “Kennedys are always thinking about running for something.”