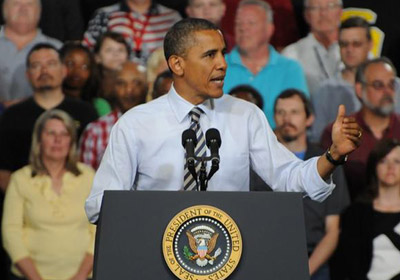 How Is Minnesota’s “Middle Class” Doing?

Strengthening the middle class is a common speech theme for President Obama, but can he design policies that will deliver on the goal?
March 01, 2013

If you consider yourself part of the middle class, you could be forgiven for not standing at the ready after President Obama called for you to be reignited.

“It is our generation’s task, then, to reignite the true engine of America’s economic growth—a rising, thriving middle class,” Obama said in his State of the Union address last week.

After all, you’ve heard similar calls before. Many, many times. Governor Mark Dayton said his budget is “squarely focused on improving the lives of middle class Minnesotans.” Not so, said the governor’s GOP rivals who claim to defend the middle class in their own way.

And so some skepticism is a reasonable response until leaders show that they can translate political rhetoric into policies that truly boost the beleaguered middle class.

You’ve also heard repeatedly that your class is shrinking and/or sinking. That, of course, was Obama’s point. By several measures, the economic middle sagged during the last decade or so while the wealthy gained.

“Since 2000, the middle class has shrunk in size, fallen backward in income and wealth, and shed some—but by no means all—of its characteristic faith in the future,” said a report issued in August by the Pew Research Center.

What’s true for America as a whole also is true for Minnesota, according to several recent studies. The state’s productivity has been growing by about 2.5 percent a year. But middle class workers have been losing ground.

In one study, Amy Gehring at the state Department of Employment and Economic Development looked at wages listed on the reports that employers submit quarterly in connection with unemployment insurance taxes. For purposes of comparison, she translated everything into 2010 dollars.

Here’s what Gehring found: Wages at the middle grew only slightly over the 15 years ending in 2010, while the state’s top 1 and 2 percent of earners took home hefty pay increases. For example, workers in the exact middle of the pay range gained about $4,300 over their 1995 annual incomes — some 13 percent. Meanwhile, the top earners gained $49,924 to claim 24 percent more than they had earned in 1995.

The chart below shows her findings across selected groups of workers. The 50th percentile represents the middle where half of Minnesota workers earned less and half earned more.

Recession Hit Harder at the Middle

More recently, Gehring looked across a smaller time frame to gauge the impact of the Great Recession. In 2006, before the recession hit, workers at the middle of Minnesota’s pay scale took home $39,968. By 2011, their pay had fallen by nearly $500. On the higher end of the pay scale, the top 2 percent of earners had gained more than $10,000 over the same time span. For the top 1 percent, the gain was $15,000 a year.

It’s not that the top earners didn’t take a hit. They did, but they bounced back even higher than before the recession while those in the middle never fully recovered. You can see the pattern in this chart from DEED's report:

To see the picture another way, check the darkest shaded bars on this other graphic below from DEED’s report. They show what happened during the recession.

The income slump at the middle may be over. The latest estimates from the U.S. Census Bureau suggest that Minnesota families at the middle of the pay level earned about the same in 2011 as they did in 2010. That’s good news. But it’s a far cry from making up for a lost decade or closing the wage gap.

That conclusion came in connection with a state-by-state analysis of income trends in the United States. The findings for Minnesota are summed up in this graphic:

Middle Class: What is It?

One problem with assessing any promises to the middle class comes with defining the class in the first place.

In the Pew study, almost half of Americans polled with family incomes of $100,000 or more considered themselves part of the middle class as did 35 percent of those with annual incomes under $30,000.

Indeed, Mitt Romney said last year during his campaign against Obama that the cutoff for middle income was households earning $200,000 to $250,000 and less. I couldn’t find any direct definition Obama has given for the middle class, but when he has talked about tax cuts for the middle class, he has set the ceiling for that group above $200,000.

Still, there is a vast difference between those earning $30,000 a year and those earning $199,999. Some analysts bracket the middle class between households earning 50 percent and 150 percent of the median income. For Minnesota that would be roughly between $30,000 and $90,000 a year.

But I know some families earning more than $90,000 who would argue they are solidly middle class.

So we have to settle for squishy definitions and let practical sensibilities define the true middle.

There is considerable debate about using income alone to define the middle. For one thing, the cost of living differs from place to place. So an income that gives you access to a comfortable middle-class lifestyle differs too.

If you live in Hinckley, you likely pay less for basic housing than you would in Minneapolis, you probably park free and you might even be able to walk to work. Your friend who works in downtown Minneapolis has to budget for bus fare or shells out hundreds of dollars a year for parking.

For that reason and others, some analysts looked beyond income to assess the state of the middle class.

Health insurance is one measure of middle class well-being. High out-of-pocket medical expenses are a primary cause of bankruptcy in the middle class, according to a briefing paper co-published by the Minneapolis-based think tank Growth & Justice and Demos, a research and advocacy group based in New York City. Until recently most Minnesota workers counted on getting the coverage at work. And most still do. But 23 percent of Minnesota workers lacked access to employer-sponsored coverage in 2010, up from 14 percent in 2000, the briefing paper said.

Meanwhile, 10 percent of Minnesotans under age 65 had no health coverage at all in 2010, up from 8 percent a decade earlier, said a report published last year by the Minnesota Budget Project, an initiative of the Minnesota Council of Non-profits.

“Although the decline in employee-sponsored health insurance has occurred at all income levels, it has been particularly dramatic among those living at or below 200 percent of poverty,” the report said.

In other words, it hit close to Minnesota’s middle-income earners. A family of four living on about $45,000 would be at 200 percent of the poverty level.

Another measure of middle-class security is a retirement nest egg, something to guard against sliding into poverty once the paychecks stop. In 2001, 71 percent of Minnesota workers had access to employer-sponsored retirement programs, according to the Demos/Growth & Justice study. That has fallen to 61 percent as employers stopped investing in pension plans and replaced them with 401(k) plans based largely on worker contributions. And, by several accounts, it still is sliding.

The sum of these parts leads to a conclusion that the middle class in Minnesota has suffered a lost decade. To be sure, it has fared better than the middle class in many other states. But while productivity grew in Minnesota, wages were stagnant at best, and significant numbers of employers shed benefits like health insurance and pensions.

That trend led the Demos/Growth & Justice analysts to conclude: “The American dream came to life in Minnesota in the form of a strong and vibrant middle class that sustained the state’s economy for decades. But for the first time in generations, more people are falling out of the middle class than joining its ranks. The economy is still productive, but the gains are accruing primarily to the top and workers are no longer getting their fair share.”

During the coming months, we will hear our fill of arguments in St. Paul and Washington alike over what constitutes a fair share for the middle class and over the best policy ideas for securing it.

Meanwhile, the middle class is reignited in one sense: It has become a powerful political icon representing something that very many people believe is very wrong in America and in Minnesota too.