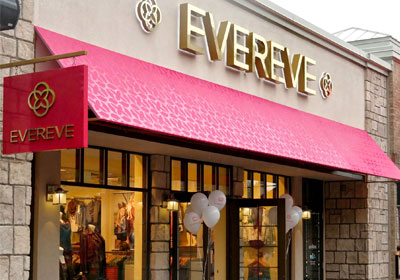 How Evereve Succeeds: Being The Perfect Fit For Moms

The Edina-based retailed has carefully grown from one store to 52 nationwide. Executive chairman Mike Tamte explains the company's "secret sauce."
May 04, 2015

The Great Recession was tough on retailers everywhere. Even after the dust settled and the economy began to improve, the retail landscape remains challenging terrain with competition coming at merchants from every angle, particularly online.

Edina-based fashion retailer Evereve has defied the odds. Megan and Mike Tamte began with a single store, originally under the Hot Mama banner, in 2004. Today, the fast-growing chain has 52 stores in 18 states with more on the horizon.

On April 15, the company announced that three private investment groups acquired a minority stake in Evereve. The company has five more stores in the pipeline slated to open by September in Pennsylvania, Connecticut, Colorado, Illinois and Arizona.

When the Tamtes opened their first store more than a decade ago, the two had zero retail experience. But they were driven by a strong concept that resonated with customers.

“From the get-go we said, ‘We’re a store for moms, fashion loving moms.’ So we had an identifiable niche. We weren’t going after anybody and everybody,” says Mike Tamte, executive chairman of Evereve. “We haven’t swayed from that original vision.”

The couple set sales targets to gauge whether or not it made sense to expand. They opened their second store in Maple Grove in 2005 and their third store in Glenview, Illinois – Megan Tamte’s hometown – in 2006.

In the early stages of the company, the business was bankrolled with the help of investments from family and friends. But by 2007, Mike Tamte says that they no longer needed to rely on friends and family, but could fund growth through the cash flow of its operations. Tamte declined to disclose revenue for Evereve.

”Our secret sauce is our customer engagement; we’re very hands on,” says Tamte.


Tamte says that the company is often pitched new store locations, but is wary of rushing to every opportunity: “A majority of the time we just say no. It has to make financial sense for us. We do a lot of research before we say yes.”

During the recession, they did an extensive survey of store customers. Tamte says that they got high marks for customer service, but also discovered that many customers found it more expensive to shop their stores. In response, they tapped new sources to add some less expensive items to the store’s product mix.

The company has 8 locations in the metro area: Edina, St. Louis Park, St. Paul, Roseville, Eden Prairie, Maple Grove, Wayzata and Woodbury. The average footprint of an Evereve store is 2,500 square feet, which Tamte says is just right for the retailer: “It’s perfect for a boutique like ours.”

The company changed its name from Hot Mama to Evereve in July 2014. The two reasons behind the changes were that many prospective customers thought it was a maternity store and that after a decade they were unable to acquire the Hotmama.com domain name for their web site.

The three private investment groups that have acquired a stake in Evereve are Winona Capital Management and Prairie Management Group, both of Chicago, and the Lewis family, which owns River Island, a London-based fashion retailer with more than 300 stores worldwide.

“We needed to create liquidity for our initial investors,” says Tamte, who notes that about 40 family members and friends had invested in the company. “We’ve been getting a lot of phone calls over the years. …We felt like it was in the best interest of our investors to pursue liquidity now.”

Tamte declines to say what percentage of the company the investors acquired, but notes that it’s a minority stake: “We didn’t want to give up control at this point.”

The move brings a retail legend to the company’s board: Gordon Segal of Prairie Management co-founded Crate & Barrel with his wife in 1962.

“In my opinion it’s a coup,” says Tamte of adding Segal to the board.

Looking ahead, Tamte is bullish on continued growth for the boutique retailer: “Our plan is to continue growing at least 30 percent, year over year.”