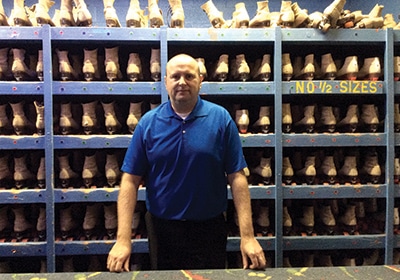 How Cheap Skate Got in the Black

It seems like a pastime stuck in the ’70s. Head to the rink, make fun of the Bee Gees music, try not to fall. Roller skating—who does that anymore?

Plenty of people, according to Ed Golebiowski, manager of Cheap Skate, a 14,000-square-foot roller skating rink in Coon Rapids. Only now they’re shorter people, more hyper people, more likely to want to dance to Barney. They’re kids. And they love to skate. They also love to glow. You put those two together and you’re onto something.

“The kids just go crazy for black lighting, they just love it,” says the amiable Golebiowski. “We deck the kids out in glow, give them $2 glow sticks; they can’t get enough.”

Golebiowski runs the rink for owner Rick Lund, who bought it in 1992 after learning the recreation business in, of all places, the military. “I spent 22 years in the Air Force” as a morale, welfare and recreation officer, Lund says, “so when I got out, Cheap Skate seemed like a natural for me.” He also owns two golf courses and a GoKart track/mini golf course.

Lund operated the rink himself for two decades and admits that at times he felt like he was on roller skates. “We had some lean years for sure,” he says, “as the teenagers stopped coming.”

Enter Golebiowski. He had worked at the rink as a young man, serving as a DJ, (Vanilla Ice always got the wheels rolling, he says), and started bringing his own three children to the rink. He was getting stale in his career in sales at Allianz Life, looked around and wondered: Why not reposition the rink for kids? Why not offer to run it himself?

Golebiowski and Lunde spoke, and he laid out his vision. Lund was sold. “Ed is just so energetic and creative, I really don’t have anyone in any of my businesses that matches his creativity. He’s really brought new life to the place, and if it keeps bringing in decent revenue, it would be a natural progression for me to turn it over to him” at some point in the not-too-distant future.

Today, birthday parties are the big driver for Cheap Skate. The rink hosted close to 1,000 last year. It offers a variety of options, from a basic package for 10 kids or fewer (at $15 a person) to a VIP package, which includes a private room, private hostess and copious glow, for an additional $5 a person.

Golebiowski relies heavily on social media and Groupon to drive traffic—“We have a deal where if you tag us on Facebook we’ll send you a free pass; we went from 1,200 likes to more than 3,000,” he says—as well as some old flavors, like disco lights for the nostalgia crowd.

Golebiowski’s strategy is to be family-friendly. This means lot of promotions with Scouts and church groups and discounts for community groups. Teens may check in on occasion but he wants the Frozen set. And he’s getting them.

“In the 1990s and 2000s, there were a lot of people coming through the door here. But then there was a generation skip,” he says. “Those people who came in that period are having kids and coming back, and they’re realizing it’s a real family atmosphere.”

It’s a sound strategy, says Florence Adam, who’s been the manager of Skateville in Burnsville for 23 years. “I used to skate at Cheap Skate—it’s a nice rink, new paint, very nice, and I think the strategy to focus on birthday parties and families is smart,” she says. “That’s what we’re all trying to provide.”

And since there are only roughly half a dozen rinks in the metro—Wooddale Fun Zone in Woodbury, Cheap Skate in Coon Rapids, Skateville in Burnsville, the Roller Garden in St. Louis Park, Saints North in Maplewood, and Skatin’ Place in St. Cloud—oversupply doesn’t seem to be a problem.

Nationally the trends support the theory. Jim McMahon, executive director of the Indianapolis-based Roller Skating Association International, says there have been 15 new skating rinks built in the country in the past 18 months. He says the recent popularity of roller derby has helped millennials embrace the sport.

But Golebiowski is focused on families. To keep luring them, he knows it will take further investment. And right now he wears most of the hats. “I’m the plumber, the painter, the marketer, everything,” he says. So he’s busy, and optimistic. He sees the attendance rising, particularly on Sundays. He has a business, and it’s based on glow, and with any luck, it may turn into gold.