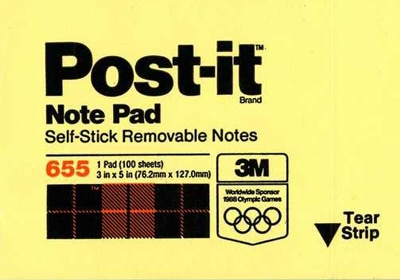 Introduced to the public in 1980, the Post-it Note has become one of the Minnesota-based 3M Company’s most successful products.

In 1968, Spencer Silver, a scientist at 3M’s headquarters in Maplewood, was working to create a strong adhesive. Accidentally, he developed a new material that was light enough to easily remove and peel apart. Silver felt that he had invented something unique and useful but struggled to find what that use could be. He spent five years meeting with others at 3M, trying to find someone who could recognize the unique capabilities of his invention and create a new product with it.

At this time, Art Fry, another 3M employee, was frustrated when his scrap-paper bookmarks fell out of the hymnal he used while singing in his church choir. As he was thinking of ways to make a better bookmark, Silver’s “not-so-sticky” adhesive came to mind as a way to make pieces of paper slightly sticky without adhering permanently.

Fry realized that the sticky papers would work better as notes, and the product idea was solidified. Henry Courtney and Roger Merrill—two other members of the research team—found a way to make the adhesive attach to one piece of paper. Their changes allowed the note to stick to, and be removed from, other paper and objects. The product was originally called Press n’ Peel.

After mixed success in market tests in several major cities, 3M almost decided to stop producing the Post-it Note. In a final effort to test the product’s potential, marketers decided to give it directly to consumers in Boise, Idaho. They wanted to see if giving consumers free samples would increase sales. This marketing test became known as the Boise Blitz and was wildly successful. About 90 percent of people who tried the product said they would buy it.

In 1980, the Post-it Note was made available to customers in U.S. stores. It became hugely popular. The Post-it Note team was awarded the internal 3M Golden Step Award in 1981 and 1982 for their development of a profitable product that generated significant new sales. In 1981, they were also awarded 3M’s Outstanding New Product Award.

Since their debut in 1980, Post-it Notes have become an office staple and entered pop culture. In 2000, they were available in twenty-seven sizes, eighteen colors, and twenty fragrances, and could be used in a variety of dispensers. In 1991, Minnesota Twins fans wrote Post-it notes of encouragement that contributed to a large mural in support of the team in the World Series. Post-its have also been used to create works of art, and have been featured in museums like the Museum of Modern Art in New York City (MoMA). MoMA’s 2004 exhibit “Humble Masterpieces” displayed an example of the product from the museum’s permanent collection.