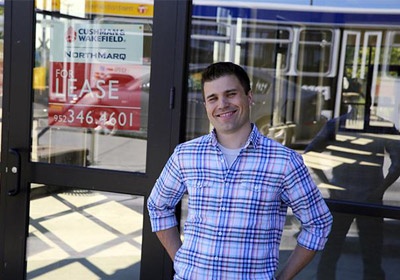 Anyone who feels their neighborhood lacks, say, a bakery, can post the idea on the website.
August 07, 2014

Founders Justin Ley, David Berglund, and Jason Goux tout their crowdfunding site as a unique, neighborhood-based alternative to Kickstarter. Anyone who feels their neighborhood lacks, say, a bakery, can post the idea on the website. Others who agree can vote for it, thus generating what in essence is free, crowd-sourced market research.

Meanwhile, would-be bakers can see there's demand in the 'hood for croissants and Ã©clairs, and respond with a business pitch that will lure crowd-funding by offering, say, free blueberry muffins for life in exchange for an investment.

“It's really grassroots,” said Ley. “Anyone can suggest a neighborhood need; they can even point to a specific empty storefront and say something should go in there. Hoodstarter has a function that will allow an entrepreneur to literally create a business pitch from the idea with just a click.”

“We imagine many people reliving what has happened to us,” said Berglund. “We drive by these vacant commercial spaces and say to ourselves, 'I know what I wish would move in there,' and it's frustrating that nothing happens.


“So imagine going by that vacant storefront, but now it has a sign in it that says, 'What would you like see here? Go to Hoodstarter and vote.' People in the community — whether it's Kingfield or Loring Park or Nokomis or wherever—will be able to go there and see what other people are saying and add their two cents.”

Hoodstarter’s first business is the Locavore Eatery, which is targeting a fall start-up at a storefront at Oaks Station Place, an apartment-retail mixed-use building adjacent to the 46th Street Metro Transit station. Husband-and-wife owners Charles Stotts and Kacey White say they're using the website's functionality to help raise money to bridge a final $40,000 financing gap. Stotts and White offer a free bottle of wine every day for life to neighborhood diners who sign up for $1,000 founding memberships. (You have to order and pay for a meal.)

Locavore — which as its name implies will feature menus derived from locally sourced ingredients whenever possible—is seeking to join another restaurant along the Blue Line, the Northbound Smokehouse Brewpub on 38th Street, in translating crowdfunded resources into a successful operation.

Says White, “Charles and I are two of the hardest working people anyone will ever come across, so, for us the thought of doing a Kickstarter was a challenge, it felt like we would be begging for money. There is so much b.s. [that] people ask money for on there. Hoodstarter, though, didn't seem that way. Justin and David really want to do something good and professional with Hoodstarter and we are happy to be a part of it with them and them be a part of the final pieces of Locavore Eatery with us.”

Hoodstarter’s business model provides for a 5 percent cut of any money raised, but the founders say they're really in it to help channel the crowdfunding phenomenon to where it's really needed —locally-owned neighborhood businesses that have financial and social connections at a time when the availability of bank financing remains a huge problem for start-ups.

While it still feels a bit like “begging for money,” Locavore’s White added, “the reality is banks aren't giving out loans to the little guy anymore, and we need this last little bit to satisfy our (U.S. Small Business Administration) loan.”

In effect, Berglund said, the idea is to redirect discussions about community business—now scattered among local forums, associations and block parties—to a structured and “scalable” online setting.

“One of the inspirations for the idea is the E-democracy neighborhood forum,” added Ley, who partners with Berglund in a consultancy called StarterLabs. “I live in Minneapolis, and I always look at those forums. We have this one spot in our neighborhood two blocks from our house and it's always been vacant. On the neighborhood blog, everyone's saying, 'I really want a 'blank' to go in there, like an ice cream shop. It's always the most active and commented-upon post in the entire forum.

“But the problem is, you get to the end of it, and it's like, 'Oh yeah, this is great, let's make it happen,' but there's no mechanism to really do that. David, Jason and I think we can provide that.”