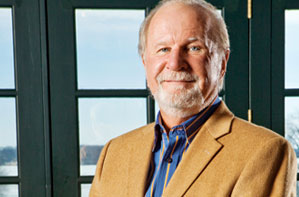 Everyone enjoys being called “a tough competitor.” It’s a badge of honor. Some just deserve it more. Like, for instance, William Cooper—call him Bill—the ex–Detroit beat cop, certified public accountant, and current CEO of TCF Financial Corporation, the state’s second-largest largest locally based bank holding company ranked by assets (behind U.S. Bancorp).

Cooper is a guy who relishes the notion that he gets rolled by no one. These days, that includes the Federal Reserve, which Cooper is famously suing over dramatic cuts to debit card swipe fees—income from those fees added up to 9 percent of TCF’s 2010 revenues.

“The basic philosophy here,” Cooper says in TCF’s Wayzata headquarters, “is and always has been, ‘a little number times a big number equals a big number.’” Translation: TCF’s strategy, ever since Cooper arrived 26 years ago, is to serve what he refers to as the “Joe Lunch-Bucket” crowd, a middle-class clientele that sees value in free checking accounts, accessible locations, and opening and closing times that extend beyond the classic banker’s hours. TCF’s 2.1 million account holders, Cooper says, represent “a number you’d normally associate with a bank five times our size.”

Since Cooper’s ascendancy, “The number [total assets] got bigger,” he says with a laugh. “But the basic philosophy hasn’t changed.”

TCF’s history can be traced back to 1923; in time, it became known as Twin City Federal, one of the most prominent savings and loans in Minnesota. But by 1985, when Cooper joined TCF as CEO after serving as president of Huntington Bank in Columbus, Ohio, the thrift was reeling from a series of near-catastrophic overreaches. It was by no means alone: The deregulation of the thrift industry in the 1970s had opened the door to bad investments; some savings and loans lost millions.

With regulators looming, Cooper aggressively cut costs—35 officers were removed in his first 18 months. He also took the company public and began rebranding TCF as the bank for the small depositor.

Shortly after forming holding company TCF Financial in 1987, Cooper’s baby passed the $1 billion mark in consumer loans. After several more years on the brink, Cooper righted the ship to the point that by 1993, TCF claimed 18 percent of the Minnesota consumer banking market, a hefty uptick from 8 percent when he took over. A steady series of acquisitions, mainly across the upper Midwest, but lately into Colorado and Arizona, has resulted in TCF managing $18 billion in assets and operating more than 440 branches in seven states, including a sizable presence in the Chicago area.

Peter Bell, former chair of the Metropolitan Council and a TCF executive vice president from 1994 to 1999, has known Cooper for 20 years. “Bill is one of the smartest people I know, both a visionary and a detail person,” says Bell, who now sits on the TCF Financial board. “When he came to TCF, it was collapsing. But through force of personality, he made it into of the most profitable financial institutions in America.” Bell also cites Cooper’s work as chairman of a group called Friends of Education, where he “has driven a positive education agenda in the state.”

Cooper served as TCF’s chairman and CEO from 1987 until 2006, when he relinquished the CEO duties. He returned as CEO in 2008 at the board’s request. Though he has just two more years on his current contract, at age 67 Cooper gives no indication of being the sort of guy looking forward to playing golf seven days a week.

Cooper is proud of TCF’s 64 consecutive quarters of profit (as of April 2011). But for all he has done to brawn up TCF, an equally important factor in the company’s success may be what he hasn’t done. TCF Financial survived the 2008 financial meltdown by studiously avoiding the easy big-money traps other banks did not.

“Most of the problems with the subprime [mortgages] came through companies who sold off mortgages they originated,” Cooper says. “They did not eat what they killed. Here, we put everything on a balance sheet.”

Cooper loves old sayings. Among them, which he cites in the context of avoiding the subprime/derivatives meltdown, is the one that goes, “There’s nothing more dangerous than a bond trader who has made money twice.”

“We had no interest in participating in the derivatives game,” Cooper says. “It was all a Vegas thing. A big casino. We knew that.”

Cooper also asserts that “the big investment firms, Goldman Sachs, Lehman Brothers, and the rest were out to screw you. They’d screw you in a heartbeat, and they knew ever so much more about it than you do. So our thinking was, ‘Why cross swords with a guy who knows a hell of a lot more about sword fighting than you do?’”

Cooper’s strategy also has largely kept TCF out of the credit card game (the company has twice had credit card portfolios, both times selling them). TCF also has eschewed the national lending business, “where you put $5 million into some big shopping center or something,” Cooper says. Occasionally, its specialty finance group lends out of TCF’s markets, with some loans nationally and in Canada.

Cooper also says that TCF has never made any unsecured loans of any kind. “You don’t pay us, we take something back. It’s real old school,” he says. “I tell people, ‘We’re kind of like a 1950s bank. We take deposits from lots of people, and we make loans to people who we think will pay it back.’ And even with that, you still lose some money. You just don’t lose so much.”

Cooper says that he “never had the dream to be a banker.” An early CPA job—simultaneous with his police gig—led to a position as assistant treasurer in 1973 with Detroit-based Michigan National Bank, the first rung on his banking career.

“But I do have a natural inclination for it, particularly consumer banking,” Cooper observes. “And the reason is the way I grew up. I didn’t go to Yale, okay? I understand the way people, the guy on the street, thinks in terms of their finances, because I was there. I don’t understand investment banking and international banking and all that jazz. But I understand people, and what their motives are.”