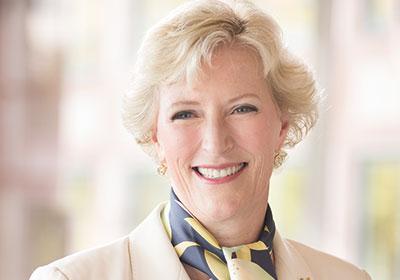 Joining the board of St. Paul–based insurance company Securian Financial Group was an easy decision for Trudy Rautio. But that doesn’t mean it has all been smooth sailing.

At Securian, Rautio joined a board that she found easy to contribute to. “The board is very aligned with management with respect to risk tolerance, risk appetite, transparency, good corporate governance,” she says. In addition, “you had a very steady hand at the helm of the company.”

All this helped Securian weather the storm when the financial crisis hit in 2008. Rautio describes this period as her most memorable time on the board—as well as “one of those experiences you may not want to go through ever again in your lifetime.” Securian was hurt by the financial crisis, as were many other companies, she says, “but never hurt to the extent that their balance sheet was at risk, or that their promise to pay to their policyholders was at risk.” Securian navigated those choppy waters, and Rautio, who serves on the audit and investment committees, played a crucial role in helping keep the ship afloat.

“She comes to board meetings exceedingly well prepared,” says Robert Senkler, Securian’s chairman and CEO. “She asks very good questions with respect to numbers [and] people.” Senkler thinks that “the best quality of any good board member is that they ensure that management has fully vetted and thought through the issues, and asked you the questions necessary, whether it would be an acquisition or just a business issue.”

The Securian board relied on Rautio’s extensive experience in accounting and finance for several large companies (Carlson, Jostens, Boise Cascade, Pillsbury) during those wild months. “I remember in particular trying to close the books during the financial crisis in 2008 and 2009,” Senkler says. “She was very calm, very thoughtful,” he says, and helped ensure that the 130-year-old institution had considered all the issues.

While the financial crisis has been the toughest challenge the Securian board has faced in recent years, it has other ongoing issues that it needs to monitor. Succession planning is one. Securian’s nominating, governance, and compensation committees “were very active in the process with management on succession planning,” Rautio says. Senkler some time ago had laid out his timetable for retiring, identifying talented executives and the assignments necessary for directors to evaluate them “in a variety of ways, not only in their performance but also outside assessments.” This approach has served as “a guidepost for me in terms of other boards that I sit on, but also as a real learning of what to do and what not to do.”

Rautio says her time on Securian’s board has helped her as an executive, as she considers the various risks that Carlson faces. “Securian is expert at assessing risk, and other companies could perhaps take a lesson from that,” she says. At Carlson, those risks include the company’s investment portfolio, as well as other risks that are less obvious, requiring a more holistic viewpoint on matters.

Looking at risk holistically is a topic “of high interest to audit committees and companies all over,” Rautio says. In fact, “a lot of larger companies are now creating risk committees on their boards. The risk committee has the responsibility for things that wouldn’t naturally fall within audit. Maybe it’s insurance, maybe it’s IT security, maybe it’s business strategy, maybe it’s legal.” In the legal area, for instance, Carlson’s international business needs to keep tabs on legislation, including the Foreign Corrupt Practices Act. “That is really predominant now in people’s thinking,” Rautio says. “Are we complying fully with it? What kind of training are we doing on a global basis?”

Clearly, Rautio is a director and executive who asks questions. But then, she does see board service as something that “requires an inquisitive mind. The role is not to manage; it’s not to do the work. A lot of people that are type A personalities and have successful careers want to jump in and solve problems. That isn’t the role of a board. A board’s role is to challenge management, to make sure that they provide the guideposts for management to operate between. So having an inquisitive mind—asking a lot of questions, and asking the right questions to make sure that you have a full appreciation of the answers to those questions—is really important.”