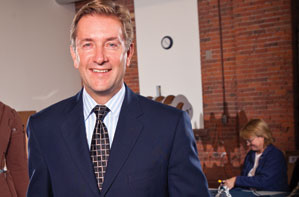 Improved care has led to a much higher survival rate among cancer patients. It’s also produced an unintended consequence: the problem of how to treat lymphedema, the chronic swelling that occurs, usually in the arms and legs, after the surgical excision or radiation of lymph nodes, common tactics in the fight against cancer. There are currently about 2 million lymphedema patients in the United States.

Irene Waldridge, a certified manual lymphatic drainage therapist, founded Minneapolis-based Tactile Systems Technology in 1995 to develop a treatment. The result was the Flexitouch system, which allows patients to treat their lymphedema at home. It is prescribed by a medical professional and used under his or her supervision.

Before Waldridge started Tactile Systems, “the only solution to lymphedema was to wrap yourself with bandages to try to keep the condition from becoming worse, and/or to visit local lymphedema clinics for manual massage that would push the fluid back out of the affected limb into the core body to be processed out,” says Jerry Mattys, Tactile Systems’ CEO.

Waldridge, who’s now vice president of product strategy, “knew the characteristics that needed to be built into a device to make it emulate the massage that she had been taught,” Mattys adds. She was able to invent and develop an actual working prototype that could do what she could do with her hands.

In the seven years since the Flexitouch system received FDA approval, a handful of small competitors have attempted to find new ways of treating lymphedema or to come up with better methods to diagnose the condition. Acknowledging that the field is young and that there’s room for innovation, Mattys points out that Tactile Systems, which had 2008 revenues of $10 million, has differentiated itself in two important ways.

Second, Tactile Systems is a full-service provider. The company locates lymphedema patients by sending 27 direct sales representatives into the field to build relationships with and provide training to the approximately 4,000 lymphedema therapists who have cropped up around the United States. Most of these therapists are housed in clinics at major hospitals, such as the lymphedema clinic at Abbott Northwestern. Tactile Systems also bills insurance companies, delivers the product, and trains each patient on its usage at the patient’s home.

Clinic patients are typically treated for four to six weeks in an attempt to reduce the size of their swollen limb(s); upon discharge, they’re sent home with a prescription for Flexitouch. One of more than 220 therapists and nurses contracted by Tactile Systems then conducts the training at the patient’s home.

The company didn’t have to build this logistically challenging business model from scratch. Advanced Respiratory, a Minnesota company whose product treated children with cystic fibrosis, had the same business model. When Indiana-based medical-equipment giant Hill-Rom acquired Advanced Respiratory in 2002 and moved its operations out of state, “We ended up picking up the majority of its employees, including most of their senior management team, a group that had been through rapid growth with this business model,” Mattys says. “We now consider their reimbursement expertise as one of our core competencies.”

After an $11.8 million investment in 2007 led by Galen Partners, a Connecticut-based health care private equity firm, Mattys sees a healthy future for Tactile Systems. “We’re focusing on a couple of areas,” says Mattys, whose company garnered $800,000 in angel investments in 2009. “One is to evolve and improve the current product offering through line extensions such as better-fitting garments and more streamlined controllers.”

Tactile Systems also is working on expanding the indications for the Flexitouch product, particularly in the treatment of chronic wounds such as venous ulcers.