The Leuthold Group. Far from Wall Street’s herd mentality, this Midwest investment sage has racked up a national reputation for profitable contrarianism.
April 01, 2020 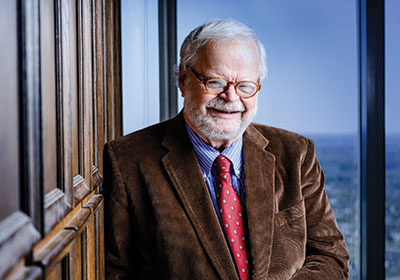 Steve Leuthold’s career has been the antithesis of conventional. And that might be one of the reasons he’s been so successful as Minnesota’s best-known investment strategist.

Leuthold started out as a fry cook, then a songwriter and guitar player in a rock band that had a No. 8 hit in Arkansas, and then a law student turned history major, before a request by his captain in the Army Reserve turned him on to analyzing investment opportunities. The more he worked on it, the more he developed a passion for discovering and sharing with investors smarter ways for them to invest—advice some of the industry’s more established pundits criticized from time to time. In the mid-1980s, for instance, he predicted a market crash, and his fears were dismissed by the bulls who dominated market thinking. Then the stock market correction of 1987 (later named “Black Monday”) proved him right.

Because of that, as well as his innovative research over the years, Leuthold gained an international following among sophisticated investors. And his foresight proved accurate once again before the Great Recession, further bolstering his reputation. As a result, his Leuthold Group’s assets under management soared from $1 billion in 2005 to $5 billion in 2012. While not always right, Leuthold has a pretty good track record.

“He is an extraordinary financial analyst and investment manager,” says Kate Welling, a former Barron’s reporter and founder of Welling on Wall Street, an investment research and analysis journal. And unlike many of his peers, she says, “who truly are sociopaths, he’s a nice guy.” In addition, she notes, Leuthold “never forgot his Minnesota roots. He never caved into the Wall Street/New York City-centric nature of the industry. And he always maintained his business headquarters in Minneapolis.”

Being far from the herd mentality of the Street isn’t the whole story of Leuthold’s success. “Steve ascended to prominence because he has a very highly disciplined qualitative process that investors respond to,” says Byron Wien, vice chair of Blackstone Advisory Partners in New York. “He gave good advice on what stocks to buy and which ones not to buy, and he built a team to back him up.”

Leuthold began building his expertise after graduating from the University of Minnesota with a degree in history, when he took a job at Cargill. In 1960, Leuthold joined the Army Reserve, where he leveraged what he learned about markets at Cargill. “I started trading commodities for myself,” Leuthold says. “And I did pretty well.” His captain noticed and assigned Leuthold to a desk job where he was responsible for tracking the captain’s portfolio.

That experience vaulted the young analyst into a position with the Minneapolis office of now-defunct investment firm Paine Webber. There he developed his Major Trend Index, an analytical tool he still uses. The index tracks over 130 components, including P/E multiples and even investor attitudes. “It gave you confidence that you covered all the bases you could,” Leuthold says. “If you got a positive or negative reading, you could act on it.” He left Paine Webber to open a bar (the Alps) on the 494 strip for a few years, then joined Minneapolis-based Piper Jaffray.

Whether it’s a national article or his many in-house publications, “Steve writes in a very accessible or down-home way—straight to the client,” Welling says. “He never hid behind a lot of technical jargon.” She also notes that it’s more than Leuthold’s wit and personality that makes the financial press keep coming back for more: “It helps that he’s right more often than wrong.”

After years of performing and publishing research, Leuthold struck out on his own in 1981, founding the Leuthold Group, which specializes in working for institutional investors. With Perspectives and Leuthold’s other publications, the Leuthold Group had become the third-largest independent U.S. research firm by the early 1990s, with numerous clients overseas as well as domestically. In the mid-1980s, his firm launched its own funds and added investment management to its capabilities.

The Leuthold Group is now carrying on without Leuthold at the helm. In 2012, he resigned to start the Leuthold Family Office, which comprises Leuthold Strategies, a limited partnership that invests money for family and friends, and the Steven C. Leuthold Family Foundation, which supports a variety of environmental, medical and social causes. In 2015, the foundation had assets of more than $41.5 million, according to the Internal Revenue Service.

Leuthold also continues to keep his contrarian eyes open for market opportunities. His latest tips? Asian equities and uranium. “I’m not giving up on uranium,” he says. “Eventually, it will pay off.”