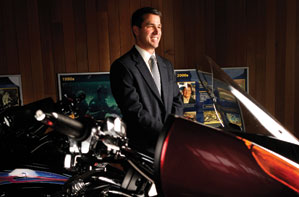 In September, the 41-year-old Wine moved to the Medina-based recreational vehicle giant after holding senior posts with such companies as Honeywell and United Technologies’ Fire and Security unit. Wine took over from Tom Tiller, who’d been Polaris’s head man since 1999.

Polaris, a $1.8 billion company best known historically for snowmobiles, now derives about 70 percent of its sales from all-terrain vehicles. It suffered not just from a soft economy but also from rising gas prices. Still, the company reported positive results in its second and third quarters of 2008—sales in the third quarter hit a record $580 million. The “parts, garments, and accessories” category was particularly strong.

Wine’s immediate plans include expanding Polaris’s motorcycle cruiser and touring footprint under its Victory brand. The company naturally acknowledges an uncertain 2009, but the brands and the company’s balance sheet look strong enough to handle the bad weather.