Dan Schadegg founded his company as a metal fabrication shop—and quickly built it into a full-service mechanical contracting firm.
April 01, 2020 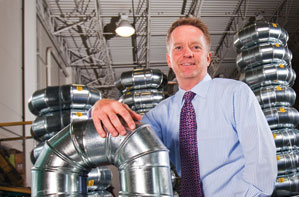 A dozen years ago, Dan Schadegg left a mechanical contracting firm to start a small sheet metal business. Then it got out of hand, as Schadegg steadily added other construction divisions. His company, Schadegg Mechanical, is now a mechanical contracting firm itself—in fact, the sixth-largest in the Twin Cities, with 2008 revenues of $53 million. Housed in a 50,000-square-foot facility in South St. Paul, Schadegg Mechanical specializes in HVAC, plumbing, piping, and sheet metal fabrication for virtually every commercial and industrial market segment and project size.

Schadegg credits a large part of his company’s success to the one-two punch of quality people who do quality work. “Construction is very much a relationship-based business,” he explains. “Our folks are very talented and quality oriented, and they live up to their word. If they say a project will be done a week from Tuesday, they’ll make sure it’s done a week from Tuesday, if not before.”

Being a newer company, Schadegg says, “we’ve always been a step ahead, technology wise. We were one of the first mechanical contractors with a completely automated fabrication shop.” The company’s duct coil line, which produces straight joints of duct work, and its plasma table, which cuts out fittings, “talk” directly to the company’s computer-aided design system. “That level of sophistication allows us to automate much of what our competitors are doing manually and more expensively,” Schadegg says.

Roughly 80 percent of Schadegg Mechanical’s revenues flow from its main mechanical construction work of HVAC, plumbing, and piping. Its 24-hour after-construction service and maintenance accounts for another 10 percent. The remaining 10 percent is generated by fabrication, split equally between sheet metal products and stainless steel kitchen products.

Schadegg Mechanical maintains a good balance between negotiated contracts (private sector) and bid contracts (public sector). At least three-quarters of its private sector work is repeat business; regular clients include Boston Scientific, Cummins Power, and Medtronic. Public projects include the Department of Human Services building in St. Paul, and the redevelopment of City Center in downtown Minneapolis. “Private companies typically select us on a value basis versus a cost basis,” Schadegg says. “In this business, you’re only as good as your last project.”

Schadegg solidified his company’s reputation in January 2008 when he supervised the removal of seven cooling towers and the installation of eight new towers, a chiller, and an air handling unit on the roof of the IDS Center. A crane had to be assembled on the roof to assist the 10,000-pound cooling towers on their 800-foot journey, yet no part of the crane could be longer than 10 feet, otherwise it wouldn’t fit in the building’s elevator. “Our hoisting subcontractor, Armstrong Rigging, had to bring pieces up on nights and weekends,” Schadegg recalls. “They then literally had to carry them up the last flight of stairs because the elevator goes up to 51A, and the roof access is one flight up on 51B.”

After solving those logistical challenges, which included cutting through the roof slab to allow access to the mechanical room, the seven old towers were lowered down on one weekend; the new pieces were hoisted up the following weekend. “I was there myself the whole time,” Schadegg says. “My heart was pounding every time a new ‘pick’ started up the side of the building. You’d get it up about 20 stories, the wind would come off of the building next door and the thing would start to twist and move on you. It was amazing to think that I could be standing on the roof of the IDS Tower in mid-January with a temperature of 12 degrees below zero—and I was sweating!”

This year’s recession has offered its own hair-raising challenges. Schadegg has been forced to cut his work force in half from last summer’s high of 175 people. “There are not too many holes going in the ground right now,” he says. “Our revenues may be down over 30 percent this year, so our immediate plan is to batten down the hatches and get through the next year and a half until the economy turns around, which I’m confident it will; it always has. Until then, we’ll focus on maintaining our relationships with our good customers and trying to find whatever work we can.”