For board service to Apogee Enterprises
April 01, 2020 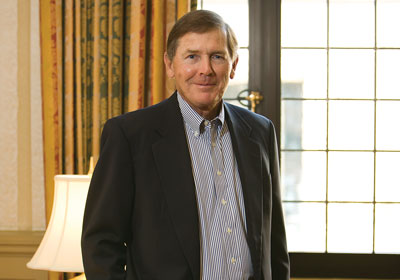 Fresh out of Northwestern University in 1966, Chicago native Bob Marzec was weighing his options: Should he join Price Waterhouse or Arthur Andersen? He’s thankful today that Price Waterhouse was the first to make an offer. “In hindsight, it certainly saved my retirement,” Marzec says. “The firm served me well for 36 years. It gave me the opportunity to work with a number of senior executives in a variety of industries and travel the world.”

He’s also glad—though he wasn’t at first—to have been transferred from Chicago to Minneapolis. He became a partner at Price Waterhouse in 1979 and later served as a managing partner until 1998, when it merged with Coopers & Lybrand to form PricewaterhouseCoopers. While Marzec continued to manage the audit practice, he began phasing out his involvement. As part of the merger agreement, the partners’ earnings were protected for three years. Marzec, who was 54 at the time, retired shortly before the three-year financial protection window expired. (Company rules would have required him to retire in two years in any case.)

“I didn’t want to retire as we were merging the practices because I think that shows poor leadership,” he says. “If you’re trying to communicate the opportunities from the merger to your staff, you shouldn’t be the first one out the door. I had hired most of the people who worked for me and had helped make many of them partners, and I felt obligated to them to stay.”

It’s that sense of leadership and responsibility that has made Marzec an attractive board candidate. And in the wake of Sarbanes-Oxley, boards have needed to beef up their audit committees, which made him even more in demand when he retired in 2002. (PricewaterhouseCoopers policy forbade its employees from serving on for-profit company boards.) When the CEO of Medtox Scientific, a Minneapolis-based drug-testing company, asked him to come on board as audit committee chair, he readily agreed.

Two years later, in 2004, Marzec joined the board of Minneapolis-based Health Fitness Corporation, a health and fitness center management company that also wanted to strengthen its audit committee functions. In addition, Marzec was a member of the special committee that evaluated offers before selling the company in February 2010.

“Bob was chair of the audit committee and was the best I have worked with on over 40 boards,” former Health Fitness director Mark Sheffert says. “Bob was willing to ask the tough questions when others may have been more reticent. He has a strong sense of fair play and provided great conscience for the board in balancing the needs of shareholders, employees, customers, and the community.”

In 2005, Marzec joined the board of Bloomington-headquartered commercial glass firm Apogee Enterprises (Nasdaq: APOG). As chair of Apogee’s audit committee, he has worked to create a more streamlined approach to reporting quarterly results. Marzec believed that the various Apogee divisions weren’t communicating between each other as well as they should, and this was creating bottlenecks in getting financial information organized.

“There were a lot of audit committee meetings, and what I did was put in what was referred to as an audit planner,” Marzec recalls. “That way, we knew exactly what had to be done statutorily so that we could schedule it correctly. I also worked with the board where we could change some of the board meetings around to be really consistent with our reporting requirements—i.e., if the board met in the middle of a quarter, it didn’t assist the audit committee in actually doing the quarterly press releases.”

Apogee CEO Russell Huffer (who announced his impending retirement in January), describes Marzec as “a super director” who “brings a commonsense, professional, levelheaded approach to the way we run our business. He gives everybody confidence that we’re doing a good job managing the company when it comes to the reporting side of the business. That brings a level of comfort to the board and allows them to concentrate on more strategic issues.”