For board service to the Mosaic Company
April 01, 2020 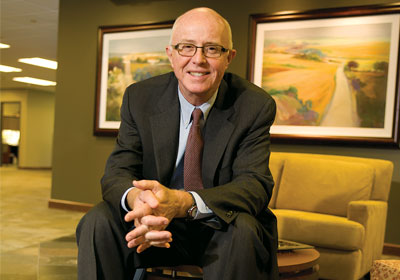 Robert Lumpkins
Bob Lumpkins not only serves on the board of the Mosaic Company. He helped establish the Minnetonka-headquartered crop nutrition firm.

“We brought together four directors from IMC, four directors from Cargill, and three independent directors,” he adds. “I think you can imagine there was potential that the board would have factions.” In fact, Lumpkins says, “the board came together and has worked together in a very constructive, productive way right from the outset.”

Lumpkins’ diplomatic skills and his long experience at Cargill undoubtedly played a role in that positive result. The Tennessee native joined Cargill full time in 1968 as a freshly minted Stanford MBA and stayed for 38 years. He was appointed CFO in 1989 and vice chairman in 1995. Four years after that, he became one of eight members of Cargill’s newly established corporate leadership team. A few years later, Lumpkins and Fritz Corrigan, a corporate leadership teammate, began exploring the possibility of growing the firm’s capital-intensive fertilizer business by acquiring or partnering with IMC Global.

“I give Fritz credit for coming up with the idea of merging with IMC,” says Lumpkins, who led the negotiations with IMC. Besides working to merge two competitors, Lumpkins and Corrigan also needed to convince Cargill’s board. “It was a little bit ‘out there’ for a private company to have this publicly traded affiliate,” Lumpkins notes.

“There were obvious synergies around bringing those businesses together,” he says. Both were top producers of agricultural potash and phosphate. Plus, “You had the opportunity to put Cargill’s international marketing skills to work on the output of the combined business,” Lumpkins notes. “You had the opportunity to benefit from management depth across two companies. IMC was a little bit thin in management, and Cargill brought a stronger balance sheet to IMC, which had some financial distress at that time.”

After five years of negotiations, the creation of Mosaic (NYSE: MOS) was finalized in October 2004. Cargill ended up owning two-thirds of the new company, naming Corrigan CEO. Lumpkins stayed at Cargill for two more years while serving as Mosaic’s chairman, a position he still holds.

Mosaic was created with a board of directors that was independent of Cargill, which demonstrated to investors that Mosaic wasn’t just a subsidiary of Cargill, and ensured that it was fairly valued in the market. It also enhanced Mosaic’s ability to attract executive talent.

After Corrigan’s retirement in 2006, Lumpkins oversaw the hiring of current CEO James Prokopanko. “Jim has brought a deep understanding of customer needs, commercial savvy, and a calm, confident leadership to Mosaic,” Lumpkins says. “He’s built a strong senior executive team and taken the company to a new level.”

While Lumpkins considers the creation of Mosaic his crowning business achievement, he also takes pride in having started Cargill’s global financial markets division in 1983, an operation that spawned CarVal Investors, a fund that invests in distressed assets. He also founded Black River Asset Management, a Cargill financial asset trading business.

Lumpkins has served on numerous boards throughout his career. “He brings a very thoughtful, studied perspective to almost any issue in front of him, whether or not it’s in his sweet spot,” says Douglas Baker, CEO of St. Paul–based Ecolab, on whose board Lumpkins has served since 1999. “We do a lot of work in the food and beverage segment, and Bob’s intimate knowledge of that industry and the whole food chain brings great value to us. His board experience, particularly at Mosaic, and all his work with capital markets, brings great specific insight and knowledge.”