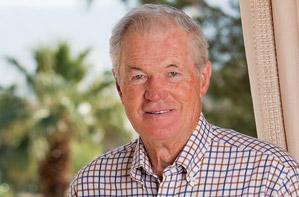 Dick Knowlton had been working at Hormel’s Austin plant for only a few weeks when, rushing to get an early punch on the time clock, he ran headlong into Jay Hormel—head of the company and son of its founder, George A. Hormel—and knocked him flat.

At 16, Knowlton was a big kid, a star player on the Austin Packers high school football team. He helped the CEO up, dusted him off, and waited to be fired. Hormel said: “Why don’t you lift up your head and watch where you’re going, kid?”

“I’ve tried to do that ever since,” writes Knowlton in his 2010 book, Points of Difference: Transforming Hormel.

Knowlton is famous for his transformative leadership of Hormel from 1981 to 1995—a tumultuous time of rising labor prices and falling red-meat sales. As other big-name meatpackers—Armour, Swift, Wilson, Rath—went bankrupt or were bought out, Knowlton transformed Hormel into an international consumer-branded packaged-foods company. It’s now a $7.5 billion multinational company, manufacturing and marketing a wide variety of products to retail, food service, and wholesale operations.

Knowlton was born in 1932, two blocks from the packinghouse, the third of seven children. His father made $11 a week weighing livestock. The family lived in a four-room house, made from the wooden racks used to ship meat on rail cars. He went to work at Hormel to pay for his first trip to the dentist and to save for college. When there was no work at Hormel, he worked on the Milwaukee Road rail line and climbed poles for the telephone company. Times were hard, he says, but good: “More loving parents no one could have. Yes, we were poor. Yes, I put cardboard in my shoes. But I really wasn’t a whole lot different from any other kid.”

Knowlton’s athletic skill earned him a football scholarship at the University of Colorado in Boulder, where he majored in geography and economics. He played guard on offense and middle linebacker on defense. Summers, he worked for Hormel, filling in for vacationing Denver-area salesmen. After college, he turned down a contract from the Philadelphia Eagles. The Eagles’ offer of $4,600 a year was more than $1,000 less than the annual salary Hormel tendered.

Except for a two-year stint in the Air Force, Knowlton spent his entire career at Hormel. “The day after I graduated, I had a job at Hormel,” he says. “By the time I was 34, I thought I should be president of the company,” he says with a laugh. “But not a chance.”

His rise through the company was steady; his experience varied—from sales and marketing to plant management to oversight of all Hormel’s operations. By the time he became CEO in 1981, Knowlton knew the business inside and out—and he faced challenges that had been growing for two decades. Red-meat consumption was down. Consumers perceived it as having too much fat, and it took too long to prepare. As more and more women entered the work force, demand rose for convenient, easy-to-prepare packaged foods for the microwave. The idea of cooking a beef roast for dinner became outmoded—and traditional meatpackers that had relied on commodity sales of fresh meat to butchers were in trouble.

Knowlton knew that in order to survive, Hormel had to be a different company. He laid out a strategy for turning it into a low-cost producer of packaged food products that met the needs of a changing society: quick and easy to prepare, reasonably priced, and tasty.

In 1982, 60 percent of Hormel’s meat sales were fresh commodity pork. By 1987, Knowlton had cut that number in half and contracted out Hormel’s largest pork operation. But Hormel’s sales remained steady. Indeed, they soon were growing rapidly—thanks to the growth of its new, higher-margin processed foods.

Hormel already had some packaged food products on the market. In 1927, the company produced the first canned meat (ham, in this case). Dinty Moore beef stew (introduced in 1935), Hormel chili (also in 1935), and, of course, Spam (1937), were household names. But under Knowlton’s leadership, the number of Hormel food products exploded. In the summer of 1986, Hormel was named “New Products Company of the Year” by Prepared Foods magazine for introducing 134 new products in 18 months, including chili-stuffed hot dogs, microwavable bacon, low-fat luncheon meats, and canned chunk chicken and turkey. In 1988, Hormel launched an industry first: Top Shelf, a line of shelf-stable microwaveable entrÃ©es.

To ensure low-cost production, Knowlton had long embraced new technology. In 1969, when he became general manager of Hormel’s largest plant, in Austin, he worked on the line for four months to see firsthand where improvements could be made. He hired a group of industrial engineers to improve efficiency through technology and automation—moves that reduced repetitive stress injuries but also could eliminate jobs.

In 1982, Hormel opened a 1.1-million-square-foot plant in Austin—the most efficient in the industry, with robotics, computerized inventory controls, and sophisticated processing machines. But even the new plant couldn’t offset Hormel’s labor costs.

In 1985, Knowlton asked union workers for a base wage reduction to $9 an hour, with the promise of going back up to $10 in a year. At the time, Hormel’s competitors were paying $8 an hour or less. Six of Hormel’s seven major plants agreed to the concession; workers at the brand-new Austin plant said no. The ensuing 13-month strike was often violent. Knowlton says he feared for his wife, Nancy, and their five children. “I had to show a strong back,” he recalls. “I went to work every day, with people jeering and mocking, but I wanted them to know I wasn’t afraid of them.”

Even though the Austin plant was responsible for more than half of Hormel’s production at that time, the other Hormel plants increased their production. In fact, the company experienced a 3 to 4 percent increase in sales during the strike. “The strike was a turning point for the company,” he says. “We got back 500 of the very best employees, and we haven’t had a problem since at that plant.”

In December 1986, Hormel reached another milestone when it acquired Jennie-O Foods of Willmar, the third-largest turkey processor in the U.S., with annual revenues of almost $150 million.

In 1995, a year after Hormel’s revenues hit $3 billion, Knowlton retired from the company, though he’s still very much engaged with what’s happening there. “I’m most excited about having no more preservatives in our products,” he says.

Knowlton now serves as chair of the Hormel Foundation, which holds about 48 percent of the company’s stock. He also is particularly enthusiastic about the Hormel Institute, a biomedical research center founded in 1942 that focuses on cancer prevention and treatment, including dietary factors.

“We’re going to double the size of the Institute,” Knowlton says. “That’s my favorite project these days.”