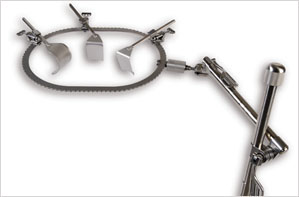 Dan Reuvers, president of Omni-Tract Surgical, a St. Paul–based manufacturer, explains that there are two kinds of surgical retractors: the wishbone retractor (with a wishbone shape) and the ring retractor (commonly referred to as a Bookwalter for the surgeon who invented it). Retractors hold a patient’s skin back from an incision or keep organs in place during surgery.

Omni-Tract launched its first ring retractor last year. The Speed-Tract ring retractor has several patented features including cam locks—that easily snap open and closed—instead of cranking or screwing mechanisms to adjust the height and angles of the retractor. It was also designed to be much lighter than the typical ring retractor. There are fewer parts, and handles have slots in them so they’re not solid; one piece has a hollow core.

The retractor ring can also be placed in a very high position. “The reason that that’s relevant is the growing obesity of the population,” Reuvers says. “More often now than used to be the case, they have to put extension pipes on to get the retractor high enough to fit over the large abdomen of all too many of us.”

“[The] product . . . introduced benefits for three different but important constituents,” Reuvers says. Fewer parts means that the people in the sterile processing unit of a hospital have less to sterilize, fewer pieces to disassemble and reassemble, and they cool more quickly. Reuvers says the Speed-Tract is easier to carry and position for nurses who prep the operating room, because it weighs about 10 pounds less than regular ring retractors.

“All of our connections are much easier for the surgeon to use,” he adds. It sets up more quickly than traditional ring retractors, which can be an asset in trauma situations. Currently, half of Omni-Tract’s business is outside the United States, though the Speed-Tract is targeted at the U.S. market.