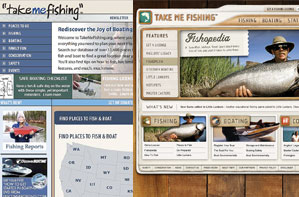 Many Minnesotans have fond memories of going fishing for the first time, the first fish ever caught, or an early-morning mist rising over northern lakes. It was that type of sentimentality the Recreational Boating and Fishing Foundation, a non-profit organization in Alexandria, Virginia, used to attract visitors to its most recognizable Web site, TakeMeFishing.org. But while the approach tugged at heartstrings, it wasn’t persuading enough site visitors to actually take up fishing or boating, says Maria Knight, the foundation’s online strategies manager.

So Knight enlisted the Minneapolis-based advertising firm Colle+McVoy to help reposition its brand and overhaul the site with the goal of convincing more visitors to buy a fishing license, wet a line, or step into a boat after experiencing the site. “Our research found that while the site had good brand awareness, it was probably rooted too much in nostalgia and wasn’t compelling or exciting enough to get people out on the water,” says Stacy Janicki, an account director with Colle+McVoy. Competing against other outdoor recreational options, Wii games, and various modern diversions, today’s parents and grandparents have difficulty persuading kids that time in a fishing boat will be sufficiently entertaining.

Colle’s creative staff used the slogan, “On-the-water memories aren’t made, they’re caught,” as a theme for the makeover. “The new imagery on the site is more action oriented and shows the social and fun side of boating and fishing, rather than just the nostalgia,” Janicki says. “We wanted people to engage more with the site and get them thinking differently about fishing and boating.”

One way they’ve done that is by including videos that feature feats by expert anglers, such as casting a line to crack an egg 50 yards away and hitting clay pigeons mid-air.

Colle’s first step was to rethink the site’s information architecture, which Knight says wasn’t as user-friendly as it could be. “The way the content and navigation was organized made it hard for people to find what they needed quickly,” she says.

The site contained vast amounts of fishing and boating data, including information from departments of natural resources in each state on fish species, places to fish, fishing techniques, articles on conservation, and the like. “We had to look at about 2,500 pages of site content and figure out how to ‘rebucket’ it from a usability and navigation standpoint,” Janicki says.

Based on data gathered from surveys and focus groups of users who had tested some redesign options, the foundation opted to reorganize the site around three main content areas: learn, plan, and equip. “It was learn about fishing and boating, plan by helping users find locations near them to fish or boat, and equip by helping people understand what equipment they needed for those activities,” Knight says.
Beta testers also suggested more regional information, so the new site features a “Fishopedia” resource—a database that includes more than 12,000 boating and fishing locations around the United States. New content will be added in the coming year in the saltwater fishing area, Janicki says, which reflects the growing popularity of that category of fishing.

User feedback also indicated people wanted to connect to others of similar interests, so last fall, the site launched a social networking feature that’s similar to Facebook. “We already have more than 5,000 members in the four months since we started it,” Knight says.

Two months after the redesigned site went live, the foundation launched a study to test how visitors were reacting to the changes. Users wearing special goggles with infrared sensors had their eye movements tracked as they read across the screen and from Web page to Web page. Users were asked a series of questions that required them to navigate through the site to answer. (For example: “If you wanted to fish for salmon, where would you go to find out what type of bait to use?”)

Using the eye-tracking data, Colle and its client determined things like where too much information was falling beneath the “fold,” or the bottom portion of site pages, requiring a user to scroll down to see information. They also identified where people had trouble quickly finding what they needed. That information was factored into the final design of the site. “It’s almost like CSI coming to the marketing world,” Janicki says.

The new design has helped the foundation meet some preliminary goals. The Web site has had 2.4 million unique visitors in fiscal year 2009 (surpassing an original goal of 1.25 million), up from 880,000 in the year prior to the redesign. In addition, average time spent on the site has grown from three minutes, 30 seconds to three minutes, 50 seconds, Knight says. The number of repeat visitors has increased 5 percent. “That’s important, because if we can’t get them to stay, we have lost in the end,” Knight says.