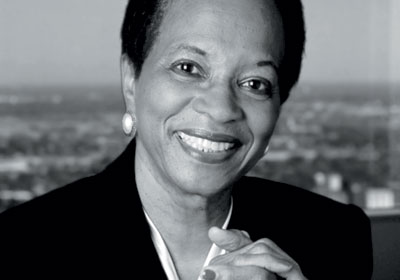 The daughter of sharecroppers in rural Georgia, Reatha Clark King began to consider herself a citizen of the world 50 years ago, when she developed close friendships with a number of international students while doing research at the University of Chicago for her doctorate in chemistry. “That’s when I began to develop myself in a multicultural way,” recalls King.

After a five-year stint as a research chemist at what is now the National Institute of Standards and Technology, King moved into higher education, first as associate dean at York College in New York City. In 1977 she became president of Metropolitan State University in the Twin Cities and held that position for more than a decade.

King’s international activities began in earnest in 1970 with a trip to the Netherlands sponsored by the NATO Advanced Study Institute. When she was 45, her colleague and friend, Donna Shalala, nominated her to lecture internationally on behalf of the United States Information Agency.

In 1988, after 20 years in academia, King entered the corporate world as vice president of General Mills and president and executive director of the General Mills Foundation. A sought-after director in both the corporate and nonprofit realms, King has served on the boards of ExxonMobil, Wells Fargo, H. B. Fuller Company, Minnesota Mutual Companies, and the Lenox Group, as well as dozens of philanthropic, civic, and educational organizations.

Over the years, she’s traveled to dozens of countries. “For me, there was always a humanitarian aspect of every international trip I made,” King says. “Even with corporate board work and its focus on business, I loved engaging with people and learning about their cultures.”

King, 75, retired from General Mills in 2002 and has since visited more than a dozen other countries including China, Singapore, South Korea, Scotland, Costa Rica, South Africa, Morocco, and Thailand.

A trip to Vietnam in 2005 stands out in her memory. She witnessed surgeries of villagers stricken by trachoma, an infection that is the leading preventable cause of blindness in the world. She says,“The most special moments of the trip were when village people nudged me on the arm and said two things: ‘Thank you for my eyesight, and can I take a picture with you?’ ”

Despite her lifelong passion for global engagement, King consciously works to balance her community contributions among her local, national and international interests. “I feel a special indebtedness to my local community,” she acknowledges. “I think I owe it more attention because I draw so much support from them in terms of encouragement and opportunities to learn.”