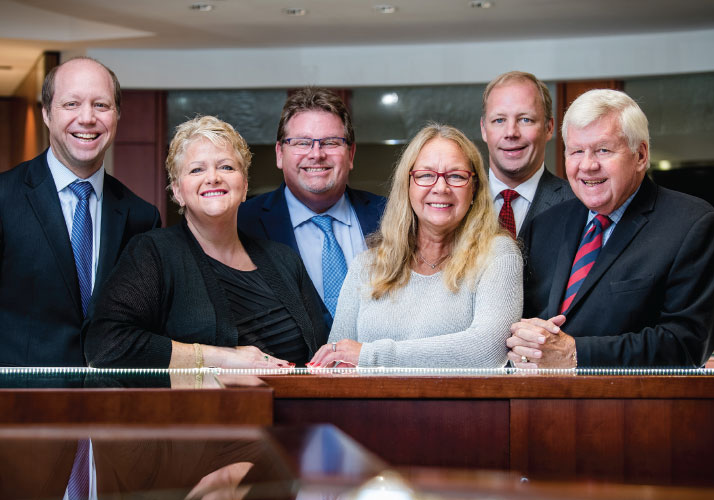 Flying in the face of headlines declaring the demise of brick-and-mortar retail, R.F. Moeller Jeweler is in the midst of its best growth period in its 67 years. Not only has this third-generation mainstay seen consecutive years of increased revenue, but traffic is up: In a recent 18-month period, its flagship St. Paul store saw 12,000 clients.

Ask the Moellers why they continue to thrive in a challenging retail climate, and their go-to answer is “We’ve been fortunate.” But that’s overly modest. Much of their success stems from a very particular Moeller mindset best described as pragmatic, self-aware, and shrewd. They know what works and what doesn’t, and they are deeply committed to their business practices, ideals, and work. “It’s not a job, it’s a vocation,” says Mark Moeller, second-generation owner and current CEO of R.F. Moeller. “Family members get involved, and they love it.”

The late Robert F. Moeller was exposed to the jewelry industry through his watchmaker uncle and subsequently founded R.F. Moeller in 1951. Mark was first to join his father’s business as a college student—temporarily, he thought—when a cousin, Robert’s key helper in the company at the time, was drafted into the military.

Mark insisted he wouldn’t stay permanently, but he quickly came to appreciate jewelry, gemology, and the idea that R.F. Moeller was in the business of making people happy.

Similarly, when Bob agreed to help Mark with the company after their father passed away in 1990, he thought it would be a temporary situation. But he, too, got hooked.

“This business, it gets in your blood,” says Bob. “It’s personal, it’s fun—and everybody wants to talk to a jeweler. It’s a sort of glamorous thing.”

Jamey was working for large-scale New York jewelry brand David Yurman before joining R.F. Moeller. But, having seen the intimacy of a family business and acquired a taste for a higher purpose through serving in AmeriCorps, Jamey realized the big corporate atmosphere wasn’t what he wanted.

“That personal connection wasn’t there,” says Jamey. “I wanted to have more value in going to work every day than just getting a paycheck. We’re in an industry that celebrates fun and happiness and wonderful moments in people’s lives. It’s not just materialistic. I absolutely believe in what [jewelry] symbolizes.”

But when it comes to running the business itself, the family adheres to well-defined rules.

“There’s no grey area with the Moellers,” says Jeffrey Skaret, vice president of partner development for Forevermark (a De Beers Group brand), who has known the family for 30 years. “They’re very upfront and forward with how they operate and communicate. It’s refreshing.”

Anyone hired at the company must become a registered jeweler within 18 months. Mark says the business demands it. “We sell sophisticated products to sophisticated clients.”

Another rule: no automatic employment for Moeller family members. Relative or not, everyone hired must have an applicable skillset and legitimate role.

Jamey, for instance, joined R.F. Moeller as operations manager, the same role he had with David Yurman. He and Mark both prefer behind-the-scenes action, while Bob and Bryan tend to be more outgoing, so they lead the storefronts—Bob is president and director of sales and manages the Highland Park store, while Bryan runs the 50th & France location. The downtown Minneapolis store is run by a non-relative.

“Everybody just kind of fit into their places,” Mark says. “We’re very fortunate this has all worked out the way it’s worked out.”

If someone has a problem, it’s addressed in the moment. “We’re German,” Bob says with a laugh. “Things get loud, but they don’t last long,”

Communication and respect were also key in planning the transition of ownership. Mark and his wife, Carol, who handles bookkeeping, are retiring. They’ve already begun the process of shifting to three-way ownership among Bob, Jamey, and Bryan. Mark gave the three of them a total 50 percent of the company. Over the next 10 years, they will buy Mark and Carol out in full, at a price set by Mark. (Mark and Bob’s sister Nancy was bought out in 2016, although she still works for the company as a sales executive.)

Mark’s priority in succession planning was to avoid the contentious experience that he had inheriting the business from his parents, who were reluctant to plan or give up control.

Bob and Jamey both feel the process was smooth, and the terms were fair—from the buyout figure to timelines and contingency plans for sudden deaths or departures.

That kind of planning and foresight, ingrained in the Moeller mindset, has helped build the company into something worth passing on.

It starts with what R.F. Moeller offers. Whereas most jewelers today are more like retailers who sell jewelry, Bob says R.F. Moeller is one of the few that still does it all: manufacturing, custom design, retail, repairs, and appraisals.

And transcending traditional brick-and-mortar, the company had the foresight to get in on e-commerce long before Amazon. In 1991, the Moellers snatched up the domain names antique jewelry.com and estatejewelry.com, providing a place to sell such specialty items and making R.F. Moeller one of the first entities to appear in a related Google search.

They’ve kept up with the times in other ways, advertising on popular digital streaming platforms and recently revamping their website. The Moellers recently purchased the building that houses the St. Paul store to prevent a developer from buying it and ousting them.

The business has weathered many challenges, from a slowdown after 9/11 to the 2008 recession, when sales suddenly plunged—from up 35 percent in early November to down 10 percent by the end of December.

“Good business practices will get you through rough times, where flying by the seat of your pants will usually get you out of business,” Mark says.

“Our name is on the store,” Mark says. “We have personal relationships, we do repairs, people know us, and they’re not going anywhere else.”

The next generation of Moellers hopes to build on that relationship with customers. Jamey says the family strives to be the independent jeweler in the Twin Cities that people think of. That may involve adding new locations, but most important, it’s about getting more people in the door.

Mark says what happens next is up to his successors, but he thinks they’re on the right path.

“When you’re in the top 1 percent of all the retail jewelers in the country, you’ve done something right … and that’s part of the planning we allude to,” Mark says. “I set a course and stick to it.”