She “lived in a business” growing up. When she started her own firm, she refused to fail.
April 01, 2020 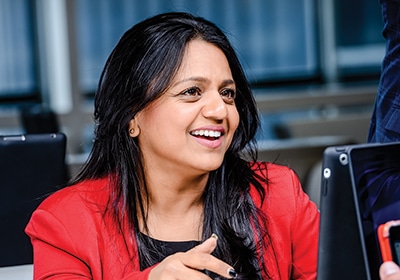 Fun Fact
Patil named her company after her daughters, Tanya and Sonya.

A joyful workaholic” is how Prema Patil describes herself. Perhaps that’s why she’s become a successful entrepreneur. That, and her dream of starting her own business, as her father had.

Patil, 40, is founder and CEO of Tanson Corp., a Bloomington-based IT staffing firm that specializes in providing high-skilled techies for projects in various industries, with a particular focus on health care. Its clients have included Medica, H.B. Fuller, MNsure, Medtronic and a customer that she describes only as “a world-renowned health care provider based in Rochester, Minnesota.” Though nearly all of its projects are for Minnesota organizations, Tanson also provides consultants for Partners HealthCare in Boston.

Patil credits her upbringing for her drive to succeed in business. “I think there’s a huge correlation between where you come from and where you end up,” she says. Where she began was Bangalore, India, the youngest of six children. Her parents owned an incense-stick business on the first floor of the family house. The family lived upstairs. “It was like we were living in a business,” Patil recalls, and as she grew up, she helped out whenever she was needed.

Being the youngest child, “I had to fight for everything,” she says. “Competing came very naturally to me. Just the sheer will to keep going, even when things looked impossible—those are the life lessons my father instilled in me.”

His daughter would put those lessons to work after she moved to Minnesota with her husband, Ramesh, who took a job here in 1996. Patil thereafter found employment as a quality manager for Bloomington-based software firm OPIN Systems. There she helped develop content management systems for securely distributing documents over the Internet to a business’ employees, customers and partners.

Patil left the work world for a few years after her daughters, Tanya, 14, and Sonya, 11, were born. In 2006, she founded Tanson (named after her girls) in order to have a flexible schedule. Having worked in the technology space, “I could see that there was huge demand for a skilled workforce in the ever-changing technology landscape,” she says.

But starting an IT staffing firm meant she was entering a competitive field. Patil’s first client—a risk-compliance software firm called Paisley Consulting (acquired in 2009 by Thomson Reuters)—was the hardest to get. After months of trying, she says she finally won it because, Paisley realized, “I refused to fail.”

To Duane Ramseur, president and CEO of the Minneapolis-based North Central Minority Supplier Development Council, that perseverance is one of the reasons for her success. “What I’ve noticed is that she is persistent even when she has been told there isn’t an opportunity,” says Ramseur, who has known Patil since 2011. “She shows the value she can bring to a company. She has secured new accounts where others might have given up.”

Looking ahead, Patil hopes to co-create a technology product for the health care industry, partnering with a company out of Canada. But it’s not only her own projects that drive her. When Patil hears that a technology that one of her consultants developed helped save a life, “that’s inspiring to me,” she says.

Something that didn’t inspire her was her achievement of millionaire status, which Patil became aware of in 2010 or 2011. It simply didn’t mean that much to her. “Growing up in a humble family and a business family, I’ve always loved the things that money cannot buy,” Patil says. That includes time with her family—both of her daughters are on their school’s tennis team—as well as time to volunteer for a local nonprofit providing education for children.

Not that work and life are neatly separated. Running Tanson, Patil says, “doesn’t seem like work for me. It’s always something I look forward to every day.”