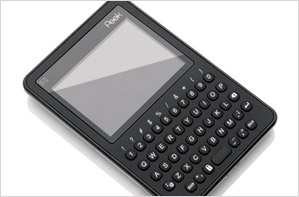 So maybe you’re the type of person who doesn’t need an app to suggest a place for lunch or point you in the direction of the nearest public restroom. Fair enough. But wouldn’t it be handy to be able to glance at your e-mail while you’re away from your desk? Enter the Peek Pronto, a pocket-sized device that lets you check and send e-mail, and that’s it. The device is aimed at the thrifty and technophobic. It costs about $100 with monthly unlimited e-mail and texting service for about $20 per month—a big potential savings compared to the $200 price tag and the $70 and up that monthly data plans require for a high-end smartphone. By all accounts, the devices are extremely simple to set up and use. The first version generated extremely positive reviews, including being named Time magazine’s “Gadget of the Year.” The update, released this past spring, speeds up the device (earning its new “Pronto” name) and adds a few more very basic features, such as PDF, Word, and image viewing. The device is also now searchable, something that was missing in last year’s version. The downside: Because it’s not a phone, it’s another device to carry around. We’re not sure we’d want to surrender the pocket real estate, but if you’re a Luddite looking for a simple tool to help you keep up with your texting and tweeting peers, this might be for you.