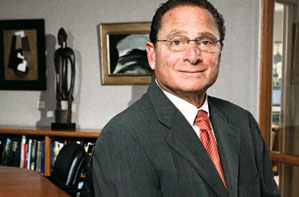 No one’s success is ever ensured, but Paul Finkelstein had as many of the critical assets in place as he began his career as anyone could hope.

Born into a comfortable Long Island family sustained by a chain of department store–based beauty salons, Finkelstein added an undergraduate education at the University of Pennsylvania’s Wharton School of Business before earning an MBA at Harvard. (His master’s thesis was on “rolling up” beauty salons into a larger business.) Combining ambition, business savvy, and a tightly disciplined focus with a frequently disarming sense of humor, Finkelstein was the right guy in the right place at the right time when Myron Kunin, Jr., who’d founded and ran Edina-based Regis Corporation, decided to retire in 1987.

“I was born into the beauty business,” Finkelstein says. He shrugs when someone expresses surprise at the size of the Regis he has built since becoming its CEO. “A lot of smart people don’t follow our stock,” he notes. (Regis [NYSE: RGS] ranked 730 in Fortune’s 2009 public company listings.)

“We keep the names of the best salon chains we acquire because they all have brand equity,” Finkelstein says, “and because it costs $3,000 per store to change out signs. The only one we didn’t keep was an operation called HeadHunters. We thought that was an image we could improve on.”

Finkelstein tells how he left Glemby International, his family’s beauty business, when he recognized “a recipe for disaster” in “14 different Finkelstein owners, not counting spouses.” He left Glemby in 1981 and held executive positions at other companies. But he saw as his best, most career-enhancing move a jump to Regis, a publicly traded competitor. According to Finkelstein, his family was less than thrilled.

“The short story is, we are Russian Jews, [the Kunins] were German Jews, and the German Jews didn’t like the Russian Jews too much,” he says. “Needless to say, that decision shortened my youngest son’s bar mitzvah list considerably. That was it for family, obviously. But I did it because I wanted to make a living, and I love the beauty industry.”

Early in his career at Regis, Finkelstein followed the Kunins’ mall-based strategy. But after the first few years—after helping to take the company private in 1988 and then, with some near-desperate banking intrigue, back public again in ’91—Finkelstein saw a a shift in real estate trends toward strip malls for salons. This model included both corporate ownership of salons and franchising.

Barely six months later, Regis purchased Supercuts; within 18 months, “Supercuts was generating 40 percent of our income,” Finkelstein recalls. With that, Regis became the go-to destination for any chain looking for a buyer. “We made over 500 [acquisition] deals in 15 years,” he says. The feverish pace has made Regis 10 times the size of its closest competitor, though it commands only 4 percent of the American beauty industry.

Regis’s biggest local competitor, Ray Barton, board chairman of Edina-headquartered Great Clips, says Finkelstein “brilliantly executed his plan. Paul is a very focused operator. The most significant part of his legacy may be the opportunities he created for people coming out of beauty school. Prior to him, a stylist might be able to move from salon to salon increasing their commission maybe 5 percent. Under Paul’s plan, they had the opportunity to manage their own shops, move up as a district manager, and more, if they were so inclined.”

For his part, Finkelstein readily credits Regis’s general counsel Eric Bakken and senior vice president of finance Mark Fosland for their roles in handling the torrent of acquisitions over the years.

“It was the smallest acquisition department you could ever imagine—three people,” Finkelstein says. “But it was easily 20 percent of our time, and incredibly efficient. We were on a roll. It helped that all but five or six [of the acquisitions] were asset deals as opposed to stock, so we really couldn’t get hurt. We were able to get three- and four-year paybacks on very solid businesses, and really nobody else was doing it.”

Finkelstein adds that sellers saw that “we were fair, we respected confidentiality, and we were quick. Because the one thing that kills most deals is time. Beyond that, we liked small boxes. We liked low break-even points, and we stayed with our strategy.”

Finkelstein is candid about Regis’s struggles in a belt-tightening time that has customers stretching out the intervals between salon appointments. He acknowledges the “significant dilution” that took place two years ago when the company felt required to raise new equity to avoiding “bumping up against a financial debt covenant.” But, Finkelstein says, “We did what had to be done. Because above all, while you can take a lot of chances, you never bet the farm.”