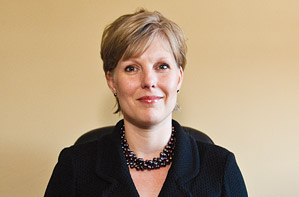 Just 16 months ago, Stephanie Laitala was working 80 hours a week, trying to get her “baby,” Owl Bookkeeping and CFO Services, to take flight. Back in 1999, she had turned her work as a part-time freelance comptroller into a firm providing accounting services and financial guidance to small businesses.

Today, she works less, welcomes new clients every week, has doubled her work force, and reports that company revenues have soared 83 percent over 2009. A self-professed “control freak,” Laitala found that only when she was forced to take time off did her business finally prosper.

When she started her business, Laitala hoped to focus on providing strategic financial services to her clients, but agreed to provide bookkeeping and day-to-day accounting services when necessary. “I told my clients they were dramatically overpaying by having me do their bookkeeping,” she recalls “But they’d say ‘That’s okay. We love you. We trust you.’ ”

By 2002, Laitala had a waiting list of clients, and she hired her first employee, a bookkeeper. Owl Bookkeeping and CFO Services focused on companies with annual revenues under $10 million, and grew over the next seven years to have 10 employees. But Laitala soon felt frustrated.

“We just couldn’t seem to get any traction,” she says. “Were we growing? Sure, but it was tiny growth—2 or 3 percent growth. We were getting new clients, but at the velocity we should have? No way. It was almost like we stumbled over the growth rather than actively looked for it.”

Looking for answers, Laitala listened to one of her business contacts, who suggested she look into the “Entrepreneurial Operating System” presented by Gino Wickman in his book Traction: Get a Grip on Your Business. “Its beauty was its simplicity, transparency, and accountability,” she says. “It spoke to me.”

Laitala launched Wickman’s system at Owl Bookkeeping in the fourth quarter of 2008. She knew the company would benefit from the system’s focus on defining roles and accountabilities—something that Owl lacked. Trouble was, Laitala had a hard time following the rules, at first: “The transition was hard for me, frankly, because I was used to doing everything. I would fall back into old patterns.”

A phone call in April 2009 changed all that. Diagnosed with breast cancer, Laitala had a bilateral mastectomy within two weeks, and began a regimen of chemotherapy. She handed the keys to her operations manager, and didn’t return to work for seven months.

There is a reason. “In the late ’80s, I traveled to Guatemala, and while I was there I met with a Mayan shaman who told me that my guardian animal was the owl,” Founder Stephanie Laitala says. “In Guatemalan culture, the owl is a symbol of prosperity. So using a symbol of prosperity in my accounting firm’s title seemed like a reasonable thing.”

“I was nauseated; I was in the fetal position,” Laitala recalls of her time recovering. “It was hard for me to move. It was not great. But you have a lot of time to think. When you’re literally battling for your life, introspection happens. What’s really important?”

Laitala says she figured out that what she loved doing was not what she had been doing: “I realized I didn’t really like doing the client work anymore, and it also wasn’t the best use of my skills. And I realized that some of the fires that needed to be put out in the year before I went on my sabbatical were caused by me . . . because I’m not a very gifted manager. And my operations manager is a gifted manager, and finds great joy in it. I came to realize that I had been making it harder for my amazingly fabulous team to do their jobs—and that I didn’t need to be all things to all people.”

As Laitala recuperated, Owl Bookkeeping continued to flourish. When she returned, she was ready to be a leader, not a micromanager. Now she focuses on what she likes and does best: figuring out where her organization wants to go, and how to get there. “I’m much more involved in strategy, and of course, sales. I’m good at that, so it helps,” she says.

Owl Bookkeeping currently has 23 employees and provides its clients with the services of a crossfunctional team. “We have two beliefs about a small business’s money: It should be stable and secure, and there should be more of it,” Laitala says. “The secret to what we do is we team our bookkeepers, comptrollers, and CFOs to achieve those objectives. And our clients get exactly the right skill sets for the right price.”

In November, Owl Bookkeeping opened its first branch office, in Ohio, and plans to open up as many as three other branches outside Minnesota in 2011.

“I’m extremely proud to say that I’m a survivor,” Laitala says. “And so is my company.”