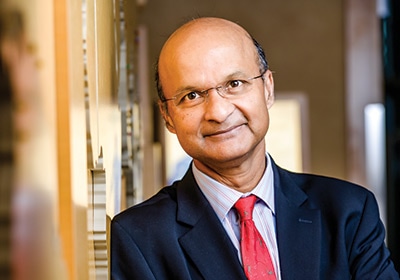 Omar Ishrak was tapped as chairman and CEO in 2011, amid challenging times for Medtronic and the med-tech industry. Before that, he served as president and CEO of GE Healthcare Systems, a $12 billion division of GE Healthcare. We delve into the increasing external pressures facing med-tech.

What is your sense of the health of the med-tech industry in Minnesota?

I don’t know if there’s any large difference locally or nationally. I think locally there’s a concentration of medical device technology companies. I don’t see anything that should change that concentration level as opposed to other states or anything like that. . . . Minnesota remains an attractive location to do life sciences work of any form, whether it’s technology or providing the care or extending research.

Now the med-tech device industry in general, though, has to recognize that unless we put a lot more effort into ensuring that the value of our innovation is understood and realized, we are in danger of becoming commoditized.

Do you see any chance that the medical device tax, which partly funds the Affordable Care Act, will be repealed? How much does that impact you?

Of course it impacts us a lot. It impacts us to the tune of $170 million or $180 million a year. This clearly has financial impact, as much on us as anybody else, because our sales are higher. But I look at it in the context of being realistic about it. This is law that has been passed. . . . Right now we have to pay that tax, whether we like it or not. And we have to still run our business and we still have to invest in it and we still have to return to our shareholders. All of that still exists and we have to manage through that.

I think the broader question of implementing effective health care policies in the U.S., which will drive better outcomes at lower cost, is still a journey in progress. I think there are elements of the Affordable Care Act which help that, but it’s nowhere near complete. . . . I put [the] device tax or anything else in that context. It’s part of a bigger equation.

In August you acquired Cardiocom, which makes remote patient-monitoring devices. What does this new line of business mean for you?

I think it is very significant in the sense that it does two things. First, it’s a different type of revenue stream than what we’re used to. The payment mechanism is based on overall outcomes and the value that’s created in generating that outcome. And it also accesses a broader scope of patients in a general disease area than what we’ve been used to. In heart failure, for example, the only patients we have access to are patients who have our devices. Through Cardiocom we get to access patients without our devices, but [who] still have heart failure.

The reason it’s important in the future is because I think as a company, and as an industry, we will eventually have to be measured much more on overall outcomes as opposed to procedures or equipment by itself.

What about the creation of Medtronic Hospital Solutions? Is that similar?

That’s similar, but it does attack a different point in the care continuum. Hospital Solutions, at least at this stage, is focused around driving efficiencies within the hospital; while Cardiocom, for example, is really aimed at keeping people out of [the] hospital.

We hear a lot in business about “big data.” What does it mean for Medtronic?

I’ll tell you what it means for us. In fact I’ll tell you that that is critical to our future strategies. When I talked about economic value and understanding the value of the innovation and quantifying it, that’s grounded by data.

You need data on patient results, on patient outcomes. And that’s what big data means for us. . . . In our world “big data” is not a clichÃ© or anything like that. It’s a core competence that we have to develop and we have to understand, and have good relationships with others who have such data and build business models around.

I think one of the dangers of big data is that the availability of data also makes it possible for entities or institutions or individuals to take data out of context. And then the media is such that there’s exposure to that opinion, grounded or not, in a very sensational fashion.

Do you ever feel like you’re in the shadow of [former Medtronic CEO] Bill George?

If anything, it’s a good shadow. Because Bill George is, first of all, just personally as a mentor, I find him to be just invaluable. I meet with him fairly regularly, formally as well as informally. I deeply enjoy his company. I learn a lot every time I talk to him. Bill George is one of Medtronic’s greatest assets in terms of what’s he done. And I can only benefit from that.

The company announced 2,000 job cuts worldwide in May. How do you maintain corporate culture in that environment?

The very essence of making tradeoffs means that investments have to shift. That inherently will result in job cuts somewhere at some point. As things are fast-changing, it will happen more frequently than not in some areas.

I think in this environment, certain values that one has have to be clear. Be transparent about why you’re doing certain things and have good logic behind it. Be fair to the employees who have to move. Give them the best chance possible to have other opportunities within the company where investments are in fact being made. . . . Overall, we’re adding more [employees] than we’re taking away.

Given the size of this company, is it challenging to remain innovative?

There are always challenges that a big company gets too inwardly focused. A company of this size always has to think about that and make sure that we don’t get bound by too much process and bureaucracy. But at the same time, you cannot confuse that with a willingness to make tradeoffs. . . . We cannot afford small mistakes because it touches a lot of different areas of the company. So a certain process has to be put in place. We just have to be selective and constantly questioning ourselves as to whether the things that we put in place are meaningful and relevant or not.