The Gauthiers, founders of Gauthier Biomedical, saw an opportunity that big med-tech firms had overlooked. It now is a vendor to many of those companies.
April 01, 2020 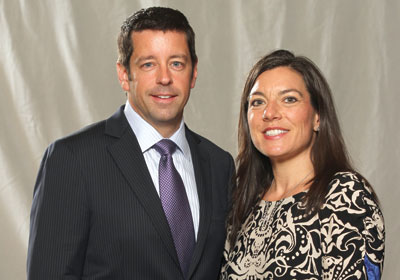 After five years working as engineers in the health care sector, Mike and Stacy Gauthier saw an opportunity to create better tools for spinal surgery. Doctors operating on patients’ spines typically used orthopedic tools for hip and knee replacements, so the pair decided to design a specialized implement.

In 2000, Mike quit his well-paying job, and the couple invested their life savings to start Gauthier Biomedical, moving into a tiny office outside of Milwaukee. With a toddler and a new baby on board, Stacy continued to work full-time as a clinical engineer while the couple built their startup.

Gauthier Biomedical’s first product, which earned five patents, was a ratcheting screwdriver that eliminated the play between the ratchet handle and the shaft, thus offering spine surgeons more precision in placing screws in the spine.

Designing was the easy part. But the Gauthiers also had to find a way into a market dominated by established competitors. Their company also had to vie with existing patented products and attract the attention of original equipment manufacturers (OEMs). What’s more, Gauthier Biomedical had little capital to build up a sales and manufacturing infrastructure.

So they started by winning the business of smaller OEMs. The couple used their earnings to hire a management team, develop a marketing plan, and add more proprietary products. Gauthier Biomedical built a name for itself as a maker of high-quality surgical devices, in time becoming a vendor for much bigger companies including Medtronic, Zimmer, and Johnson & Johnson.

Today, it offers customers the option of purchasing Gauthier Biomedical–branded devices or instruments branded with the customer’s name. It makes both custom and general devices for surgeries on the spine, hip, shoulder, knee, ankle, and small bones, or after a trauma. “When we’re out on the road, the first thing customers say to us is that we’re not the low-priced leader and delivery isn’t always the quickest, but they really like the quality, and they can depend on what they get from us,” Mike Gauthier says.

Gauthier Biomedical has experienced steady growth since opening for business in 2000, doubling its revenue, number of employees (it now has 75), and square footage every three years. It plans to develop new products for different types of surgeries, as well as devices for minimally invasive procedures.

“We’re constantly researching ideas, how to make instruments with much better functionality and appearance,” Stacy Gauthier says. “We have new ideas in the works to take us to the next level, and we’re always trying to be bigger and better.”