Assistant Professor in the Stem Cell Institute and the Department of Medicine, Division of Endocrinology
April 01, 2020 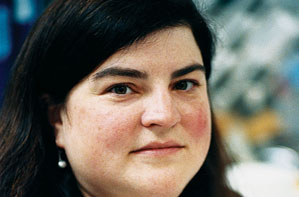 Meri Firpo traces her quest to find a cure for diabetes all the way back to a grade school biology class, where she was amazed to learn that people start out as a single cell. “I wondered how the cells could divide and make more of the same cells, but then somehow start to change into different kinds of cells, like skin cells and muscle cells,” she recalls.

Firpo is still working on the same question—how stem cells differentiate. But now, as a researcher, she wants to discover how to control that process and produce specific cells needed to treat disease.

“Stem cells are very important for regenerating tissues throughout our life,” Firpo says. The cells exist in all parts of our bodies, even as adults, but they tend to be “pre-specialized” to become more of the organ or tissue from which they derive. With adult stem cells, “we haven’t been very effective at getting those cells to expand outside of the body without specifying,” Firpo says. So she works with embryonic stem cells derived from blastocytes (embryos just a few days old) that are donated for research by patients of in-vitro fertilization clinics.

These cells “come from a stage of the embryo before any tissue specification has occurred,” she explains, and they have unique attributes. “One, they can differentiate into any cell type, which we call ‘pluripotency.’ Two, they are capable of self-renewal, which is the capacity to grow and expand into many, many cells without specifying into any cell type.”

For Firpo, understanding why and how these cells eventually do specify is an essential first step in learning to control their development. Those are the two aims of her lab at the U of M. “Being able to watch these cells in the laboratory specify into different tissues gives us essentially a model of human development,” she explains. “We could then manipulate the cells genetically or manipulate the environment to help us understand where those processes go wrong and lead to disease.”

What’s more, “if we can culture these cells indefinitely so that they remain embryonic stem cells with the capacity to make any cell type in the body, we could then make enough tissues from them to transplant into patients whose cells had been damaged.”

In her earlier career at the University of California–San Francisco, Firpo worked on generating bone marrow stem cells as a treatment for patients who needed marrow transplants but had no donor. “I hadn’t really thought about diabetes as a next goal,” she says. “But I was asked by my colleagues in the diabetes research community to apply our successful techniques from bone marrow transplant to try to generate a stem cell transplantation therapy for type 1 [juvenile onset] diabetes.” She came to the University of Minnesota in 2005 at the invitation of Catherine Verfaillie, then director of the U’s Stem Cell Institute. Another factor, Firpo says, was that the University of Minnesota’s “transplant program for islets, run by Dr. Bernhard Hering, is the best.”

Pancreatic islet cells are at the heart of Firpo’s current work. The “Islets of Langerhans” make up less than 2 percent of the mass of the pancreas but have vital functions, secreting and regulating hormones in the blood stream. One type of islet secretes insulin, the hormone released after we eat that signals our body to take up glucose from the blood to use as energy or store as fat. In type 1 diabetes, the immune system attacks those islets so the body can’t produce insulin; glucose reaches toxic levels in the blood.

“Replacing the islets is one way of treating diabetes,” Firpo says. “That therapy is actually available already. You can receive an islet transplant from a human cadaver, and the immunosuppression that’s required to keep your body from rejecting that transplant also prevents the autoimmune attack that is the cause of diabetes.”

But a major hurdle is that the number of type 1 diabetics far outstrips the supply of donors. Firpo’s work could overcome that. “By potentially generating large numbers of stem cells for diseases like diabetes, these cells could be transplanted and potentially cure diseases that, in many cases, have limited donors,” she says.

Her work got a huge boost in December, when Best Buy founder Richard Schulze donated up to $40 million to the University of Minnesota to investigate possible cures for type 1 diabetes. Two of the projects funded by the gift are directed by Hering, who along with human islets is studying the potential for transplanting specially nurtured pig islets into humans. A third project, Firpo’s, will attempt to generate islets from various human stem cell sources—particularly from lab-induced pluripotent cells.

Her methodology is complex. She wants a line of pluripotent stem cells that contain the program for the development of diabetes in their genetic material. But since there is no genetic test for diabetes, she explains, it’s not possible to know which embryonic stem cells contain the makings of the disease. “So we are going to use a different approach to create pluripotent stem cell lines by reprogramming adult cells back to a state similar to an embryonic stem cell.” Those cells will be used to create a disease model in the lab with which to test possible treatments.

Firpo’s team will also investigate whether it’s possible to generate pluripotent stem cells from a diabetes patient’s own tissues, which theoretically could cure patients with their own cells. Preclinical testing with mice and primates is already under way. “We have encouraging results that we would like to apply to this new stem cell technology,” Firpo says. “But it’s very challenging and we have a lot of work to do.”