A family of strong women guides this company that provides housing and services to senior citizens and people with disabilities.
April 01, 2020 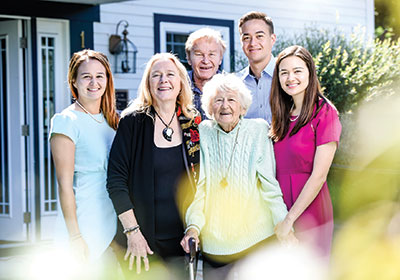 In 1971, Mary Tjosvold and her mother, Margaret, found themselves contemplating what to do with the substantial farm property that Margaret’s mother, Rosa Camille Williams, had left her daughters after her death.

After discussing potential uses for the land, Mary Tjosvold recalls the conclusion they reached: “We should do with it what my grandmother did, which was to serve people with disabilities and serve seniors.”

A strong, independent-minded woman, Rosa Camille Williams had been a nurse as well as a farmer. She also was an inspiration to her granddaughter Mary, who in her 20s, was one of the few women teaching math to inner-city youth in Minneapolis. “What I really wanted to do was go down to Chicago and study with Saul Alinsky and be a community organizer,” Tjosvold recalls.

Instead, she stayed in the Twin Cities and forged a commitment to help people who were socially isolated. Starting with her grandmother’s farm property, Tjosvold has developed more than 45 residential communities in a four-state area that serve some of society’s most vulnerable populations—senior citizens and people with disabilities. Tjosvold is the CEO of Mary T. Inc., a for-profit business with annual revenue of about $35 million that employs more than 800 people.

“We were ahead of the curve,” Tjosvold says, in bringing together seniors and people with disabilities in a community setting.

“I realized that if social activism is one of the values of your company, you can make as big an impact as I could have had as a social worker in the streets,” Tjosvold says from her headquarters, a 50-acre campus in Coon Rapids. Mary T. Inc. also operates many group homes located across the Twin Cities area.

Tjosvold had the drive to make her vision come to life. Early in the process, Alan Hamel, then the Coon Rapids city planner, met with Mary, Margaret, and Mary’s aunt, Agnes Mallery, about their plan. “There was a little building that you could see that was a former school house on the property,” Hamel recalls. “Otherwise, it was just a field. It was out in the boondocks.”

In characterizing the early development phase, Tjosvold says, “Remember, this was in the ’70s, so getting finance people, getting lawyers, getting bankers to listen to women was very difficult. So it actually took us about five years.”

Hamel acknowledges there was some apprehension that the women could execute on their plan of constructing “a whole campus for people who had special needs.” But he remembers that the women jumped through the hoops to get sewer and water extended to the property, as well as get streets paved. The Tjosvolds also managed to secure a certificate of need for the nursing home from the Metropolitan Council. In 1976, they launched their housing and services company. In 1985, the company adopted the name Mary T. Inc.

Rosa Camille Williams’ farm now serves as a residential community for seniors and people with disabilities. The setting still conveys a rural feeling. On a weekday, you can see a school bus driving by to drop off children in the neighborhood, and the Mary T. property has plenty of trees. “I don’t build to the capacity of the land,” Mary Tjosvold says. “I’ve bought land on the other side of the creek that we just keep natural.” The affinity Tjosvold’s grandmother had for the land has been passed along to her granddaughter.

Tjosvold also inherited her grandmother’s streak of independence. A self-described “second-wave feminist,” Tjosvold wrote her master’s thesis on employment discrimination against women in education. Her research showed that many women weren’t hired for educational leadership posts because of a “perceived lack of competency.” In 1975, she earned a Ph.D. in education administration from the University of Minnesota, and in the 1980s she completed an executive education program at the Harvard Business School.

Tjosvold has put her experience and education, along with her values and intuition, to work in building a business that stretches beyond the original Coon Rapids property. Her mother Margaret also was a full-time employee when the business was launched in 1976, serving as unit manager for the Coon Rapids group home.

Today, while most of Mary T. Inc.’s operations are in Minnesota, it also provides rental housing in Wisconsin and Arizona and offers services for people with brain injuries in Maryland. Annual revenue from outside of Minnesota is about $6.2 million, Tjosvold says.

“We do not go out and search out acquisitions,” she explains. “We’re always out there sensing what’s needed” for those in need of her company’s services. In addition to creating its own projects, “we have a really good reputation for taking places that are in bankruptcy or in crisis and stepping in and righting the ship,” Tjosvold adds, even when those places are outside her home state. “I think that’s really been our strength, and it’s one of the growth areas.”

One of the company’s business lines is supported living, which includes group homes located in many communities. Mary T. serves people with brain injuries, developmental disabilities, physical disabilities and dementia in residential settings. Another line is rental housing. The company buys land, develops a property and then operates rental housing there. The rental units target middle-income people, whom Tjosvold defines as “people who have worked their whole lives, have a little bit of savings.”

The company’s rental housing also provides services of various kinds. Margaret Place, which is named after Margaret Tjosvold, is a housing community for seniors in Coon Rapids. It offers meals, activities and assistance to residents, such as help with bathing. (Margaret Tjosvold, who is set to turn 97 this fall, visits Margaret Place regularly.) The third business line is home health and hospice services; the fourth is a skilled care nursing home, the Camilia Rose Care Center in Coon Rapids.

There’s a fifth line of business that doesn’t fit neatly into the health care and social services realm, but it is a reflection of Mary Tjosvold’s inclination to take risks that might make some accountants and attorneys a bit queasy. Last year, she says, she and her husband, Larry Dunsmore, “were driving down Central [Avenue] on our way to an Indian restaurant and we drove by the Shorewood,” a restaurant in Fridley on the shores of Moore Lake. She thought it was peculiar that there was only one car in the lot—then realized it was closed. She and Dunsmore decided to purchase and operate it, renaming it Crooners Lounge and Supper Club.

Tjosvold says that her company constantly reinforces a culture of “integrity, cooperation, collaboration and social activism.” On Mary T. Inc. job evaluations, employees are asked “What have you done to make this a cooperative work environment? Where is your social activism?” Flexibility is also built into the company’s work culture. A substantial number of Mary T. Inc. employees are from West Africa, and Tjosvold permits them six-week leaves to go back to Africa to visit relatives.

Tjosvold’s brother, Dean, has been working as a university professor and administrator in Asia, but he will be increasing his involvement with Mary T. At the end of this year, he will be spending about three-fourths of his time in Minnesota, where he’ll lead management training sessions and teach leadership and team-building skills at Mary T.

Dean Tjosvold and his four children also serve on the board of directors. The children are all under 32, and they’ve been building careers outside Mary T. and beyond Minnesota’s borders. Three of them earned undergraduate degrees from Carleton College in Northfield, and all four have had extensive exposure to the business. If one of them doesn’t succeed her as CEO, Tjosvold says she’s confident they would hire an outside executive and keep the business family-owned.

That probably won’t occur anytime soon. “Mary is not one who takes her foot off the gas,” says Hamel, who now serves on the Mary T. Inc. board. “Mary is not looking at retiring to some cabin. I don’t see any inclination that she is looking at slowing down at all.”