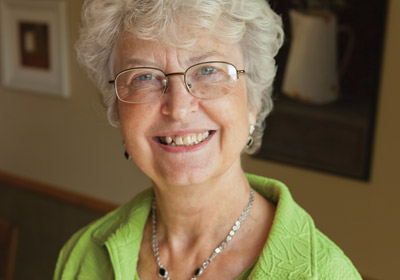 Mary Ellen Domeier knows what it’s like to sit in the CEO hot seat, leading a business in a highly regulated industry. As a long-time executive at Frandsen Bank & Trust Company, including 15 years as CEO and five as chair, she led the New Ulm bank through several mergers and acquisitions and a changing regulatory landscape. She retired in May.

She also racked up rich experience at just about every community organization imaginable in New Ulm and beyond, including serving as board member and chair of the Minnesota Bankers Association—the first woman to do so—and chair of the New Ulm Economic Development Corporation, the New Ulm Area Foundation, the Chamber of Commerce, and the United Way.

Given all of this experience and more, Domeier was a natural fit for a director’s seat on the board of New Ulm Telecom, Inc. It’s why Board Chairman Jim Jensen and others requested that she apply for a vacant position in 1999, and it’s why she has been a director for 13 years.

“Any time we’ve had a major acquisition or a crucial decision to be made, she’s always been a leader in her strategic thinking and visionary abilities,” says Jensen, who has worked with Domeier on community initiatives for years. “She’s got such good leadership qualities that she’s able to convince other people and give good guidance. She’s a steady leader who makes sure we make good, well-thought-out, and planned business decisions that are in the best interests of the company and shareholders.”

Domeier views her New Ulm Telecom directorship as an extension of her community work, firmly believing that it’s important to help guide the city’s only public company and a key employer. “If you’re going to serve your constituents and shareholders and the community that enables you to have a successful business to begin with,” she says, “you need to be involved in the things that do well, because then we all do better.” Jensen says that he and other board members count on Domeier to be deeply versed in the details, especially those related to corporate governance and finance. “She’s so knowledgeable in so many things and she’s one of those people who leaves no stone unturned,” Jensen says. “She raises the bar because everyone knows she’s in the room and everyone else steps up their game a little bit.”

One of the areas in which New Ulm Telecom found Domeier’s knowledge and experience particularly beneficial was in the late 2000s, as the company considered several acquisitions. She played a key role in guiding the executive team as the company sold its stake in Midwest Wireless (now part of Arkansas-based Alltel), then acquired partial ownership of western Minnesota telecom Hector Communications and full ownership of Hutchinson Telephone Company, among others. Having gone through the acquisition process several times as the CEO at Frandsen Bank, she could ask detailed questions and offer insight as a board member at New Ulm Telecom. For example, she could inquire how an acquisition fit its long-range goals, and what the tax and accounting implications of an acquisition might be. She urged New Ulm Telecom to consider cultural fit and integrating the two cultures. Other areas Domeier mentioned as considerations: which legal counsel to hire, or where New Ulm Telecom should look into finding financing.

“Drilling down from the 30,000-foot questions might be some specifics, such as a question requesting changes in a loan document, or a purchase document where the language or terms were not reflected as discussed or may have been misstated—the type of thing one would come across in reading myriad reams of paperwork,” Domeier notes.

Domeier calls these decisions some of the most demanding during her tenure on the board, especially related to financing the deals and merging disparate corporate cultures.

“These were very complex business transactions,” she adds. “But seeing the end result made it even more rewarding.”