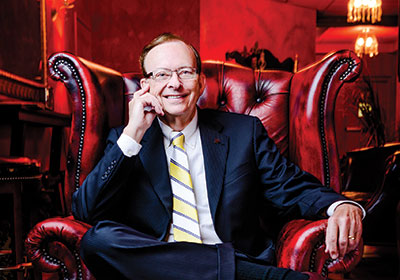 It began as a hobby helping other hobbyists.

In the early 1970s, Ron Stordahl created a keyer kit for ham radio operators to use for sending radiotelegraph code. He began selling the Digi-Key, along with other electronic components, to hobbyists through a catalog produced and mailed from his hometown of Thief River Falls.

Within a few years, long-time friend Mark Larson agreed to take over the fledgling business, seeing an opportunity to expand it through key relationships with top-brand parts makers. Since then, Larson has grown Digi-Key Corp. into the world’s sixth-largest electronic components distributor, generating $1.75 billion in annual sales.

And though Digi-Key has offices overseas, the vast majority of its operations are based in Thief River Falls, the northwestern Minnesota city of 8,700 where both men grew up. The company employs about 2,700 total and is looking to hire many more. “I think it’s not only possible, but highly probable, that in four or five years we’ll be $2.5 billion-plus,” Larson says.

Employees:
About 2,600 at Thief River Falls headquarters, 80 at its distribution center in Fargo, 70 IT workers in Bloomington, Minn.; also has sales offices in Tel Aviv, Shanghai and Munich.

Digi-Key carries more than 1 million parts from more than 650 suppliers.

In 1Q 2014, sales in Europe grew 28 percent over the same quarter the previous year; in Asia, they grew by 10 percent, in North America, 8 percent.

Digi-Key’s remarkable success is rooted in its hometown values. Both men left Thief River Falls to attend the University of Minnesota—Larson for a business degree, Stordahl for a Ph.D. in electrical engineering. After graduation, Larson worked in marketing at Abbott Laboratories in Chicago, then came home to run his family’s audio equipment store. Stordahl had also returned to Thief River Falls. He invented his Digi-Key electronic kit and he rented space in Larson’s building to sell his device and surplus components to hobbyists.

But Stordahl was more interested in building electronics than selling them, so he asked his friend to take over the business side of Digi-Key. “I got the opportunity to have a totally free hand in strategies and their implementation, and in driving the business into other areas,” Larson recalls. (Stordahl remains Digi-Key’s chairman and CEO; Larson runs the company.) After taking over Digi-Key, Larson shifted it from surplus parts to direct relationships with suppliers.

Commercial customers now constitute nearly all of Digi-Key’s business. Designers of prototypes for smartphones, security systems and other electronic products tap Digi-Key for components such as integrated circuits and transistors. And a growing number purchase them for short-run production. “Whether it’s somebody designing something for automotive, a household appliance, medical equipment—we play in all those verticals,” Larson says.

By the mid-1990s, Larson saw that the Internet could offer even more marketing benefits. In 1996, the company launched DigiKey.com, the first of its many sales websites. A few years ago, Digi-Key discontinued print catalogs, shaving more than $30 million a year in costs.

As orders grew, so did challenges. Larson saw that it took two days to send a package just to the Twin Cities, so he persuaded UPS to add one-day service. UPS added direct flights from Thief River Falls to its Louisville, Ky., hub, and FedEx soon included one to its Memphis hub. These flights help Digi-Key ship 99.95 percent of orders the day they’re received.

International expansion was perhaps Larson’s riskiest decision. He added a Canadian catalog and website in 1997. But entering overseas markets would put Digi-Key in competition with regional distributors. Seeking permission from hundreds of suppliers “would have taken years,” and many would have refused, Larson says. Digi-Key also wanted to buy products domestically and ship from Minnesota. “There was nobody in our industry that was buying in one country and selling somewhere else,” he recalls.

Larson was warned that he couldn’t go into Japan without a partner, because business there was highly relationship-based. “We didn’t want partners, so we went in our way. It started taking hold [in Japan], and then we did the same thing in the U.K. and Germany, and then other Western European countries.”

Larson convinced suppliers of Digi-Key’s value and eased concerns by harmonizing pricing with the respective markets. “Mark’s ability to tell the Digi-Key story and to make certain they understood what Digi-Key meant to them—that played a big role in growing the business,” says Robert Steffes, a former manufacturer’s rep who accompanied Larson on trips to Japan. In Europe and Asia, Larson says, Digi-Key was the first distributor to guarantee shipping orders the day it received them.

Digi-Key now has websites in 81 countries; about a third of the company’s products are shipped outside of North America. “If you look at where we’re going to get our next billion dollars’ worth of business, I’d guess 60 percent of it is going to come from outside the United States,” Larson says.

A self-described workaholic, Larson often spends Saturday mornings at the office, and he characterizes business as a perpetual cycle of obstacles to clear. But his colleagues talk about a leader who leverages employees’ strengths and has walked straight from an executive meeting to package products in the warehouse “It’s like Jack Welch going to a GE plant and troubleshooting a conveyor belt,” Digi-Key vice president of human resources Rick Trontvet says. Larson meets each batch of trainees, underscoring his conviction that entry-level workers are “really the bread and butter” of the company, Trontvet adds.

Larson has no firm plans to leave the company. He is grooming two vice presidents to eventually lead Digi-Key day to day, but he turns solemn when discussing succession. “I’m at an age where I think it’s time to take a less active role,” Larson says. But, he adds, “I haven’t quite defined that.”

1966
Earns undergraduate business degree from the University of Minnesota; returns to his hometown to run an audio equipment store.

1976
Takes over management of Digi-Key, then an $800,000 company with 14 employees that primarily sold surplus electronic components to hobbyists.

With executives from Panasonic, Digi-Key’s earliest vendor, in 1993.

1997
Begins international expansion with a Canadian catalog and website.

Speaking at a Minnesota Chamber of Commerce event, 2014.