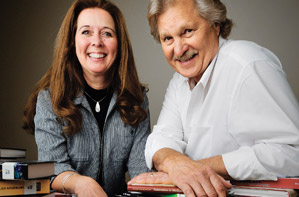 It started with stacks of dusty books piled high inside a very cold St. Paul storage shed. Back in 1983, Randal and Kitty Heise would load as many books as they could into their 1971 station wagon, and drive off to peddle them to school librarians at elementary and middle schools all over the Twin Cities.

In 1984, the Heises moved their dusty inventory to an even dustier low-rent warehouse in St. Paul, and set out to compete in the K-12 schoolbook distribution business. “Ours is very much a David and Goliath success story,” Randal Heise says. “No one gave us any chance to succeed.”

They have. Randal and Kitty now lead Mackin Educational Resources, a $40 million Burnsville-headquartered company with 350 to 450 employees (depending on the season) that has been more than holding its own against national giants including Follett Corporation (based in Chicago), Baker & Taylor (North Carolina), and Ingram Content Group (Tennessee).

Mackin boasts the nation’s largest database of educational materials for ages ranging from pre-kindergarten through 12th grade. Its approximately 25,000 customers access that inventory through Mackin’s Web site. There they can order print and electronic materials for their libraries and classrooms, working one on one with Mackin staff librarians. Free of charge, Mackin will analyze a library’s existing collection and recommend acquisitions based on the distinctive demographics of the student body and the surrounding community.

“We have incredible customer service,” Kitty Heise says. “We do whatever the customer wants. Period.”

The dusty inventory of books is long gone. The bright, clean warehouse at Mackin’s new 100,000-square-foot headquarters reflects its just-in-time fulfillment process. There is no inventory; every book on the shelf has been sold and is waiting to be shipped. Each is fully cataloged, durably bound, and shelf ready for circulation. “All the librarians have to do is take them out of the boxes and put them on the shelves,” Randal says. “We were one of the first companies to provide fully processed books to schools.

“We like to be humble, but I do think we’ve driven innovation in the industry,” he adds. “We’ve had to be innovative to survive. Our just-in-time system—that’s unique to Mackin. But our competitors have started using a hybrid of it.”

So how did this all get started? In the early 1980s, Randal was working as an art director for Crestwood House, a now-defunct children’s book publisher in Mankato. It was through his work there that he met Jim Mackin, founder of the Creative Education Company.

“Jim was just a wonderful human being,” Randal recalls. “He was 50 years older, and kind of a father figure for me. He was a pioneer in the publishing business, and he had a passion for K-8 books. He was really good at buying bargain books.” But, Randal adds, Mackin was more interested in buying than selling.

At age 86, Mackin finally decided to let go of his beloved personal inventory of about 15,000 used children’s books. By then, the Heises had moved to St. Paul, where they were running their own small advertising agency for clients that included Follett Library Book, now one of their major competitors. Over dinner with Mackin, the Heises agreed to buy all of his books. They named their new business Mackin Book Company in his honor.

The Heises now had a lot of used books to sell—but they also had an idea, born from Randal’s experience in children’s book publishing, and their joint experience working with Follett and selling books to school librarians. In the early ’80s, the big distributors in effect told school librarians what they could and should buy, with little consideration for the makeup of a school’s student body or the budget challenges the school faced.

“We realized that no one was really listening to librarians,” Randal says. “We thought, ‘What if we created a service that solved each individual librarian’s problems, one by one?’ We’d basically develop a custom shop, and it would be very cool.”

Problem: The Heises couldn’t afford to purchase large inventories. The solution came to them with their first big customer: the Bloomington public school district. In the spring of 1984, a purchase order for a piece of software arrived from a head librarian at a Bloomington elementary school. Randal called him to say that Mackin didn’t sell software, but they’d be happy to take care of any or all library book orders.

“Bloomington sent us all their elementary school orders for fall of 1985,” Randal says. “We hung up the phone, and figured out how to do it.” The Heises persuaded publishers to sell them books one or two at a time, instead of the usual hundreds. “We convinced them that our sales would increase, if they would just give us a chance,” Randal says. “And we developed this unique on-demand ordering system that no one else had.”

In 1987, the Heises took out a second mortgage on their home to keep their company afloat. “People were polite, but they’d say to us, ‘Maybe it’s time for you guys to stop dreaming and find real jobs,’” Randal says.

But the Heises’ tenacity paid off. Their customer base grew every year, they finally turned a profit in 1990, and sales have increased every year since. In 1996, they changed the company name to Mackin Library Media to better describe their business of selling not only books but also an increasing number of materials including videos, audiocassettes, and CD-ROMs.

Three years ago, the company became Mackin Educational Resources, a name that encompasses what the Heises call their “whole-school approach”—providing materials for not only school libraries, but also for classroom teachers, curriculum directors, principals, and superintendents for use throughout entire preK–12 school systems.

“Our service allows librarians and teachers to spend more time with students,” Randal Heise says. “And, we believe, to do a better job educating kids. We all work toward that goal.”

Most schools are strapped right now. And there are only so many bake sales a school can hold, and only so many magazines and rolls of gift wrap that neighbors can buy. This year, Mackin Education Resources began offering a different way.

According to Lori Tracy, Mackin’s marketing communications manager, libraries are typically the one of the first line items to be cut when money for schools shrinks. The idea behind Mackin’s Funds4Books program is that communities—not only parents and friends, but also businesses, social organizations, churches, and other local groups—can make donations to beef up school libraries and classroom materials during tough financial times.

Tracy says that unlike many companies providing fundraisers for schools, Mackin doesn’t take a cut of the proceeds. All the money that the students and schools raise goes directly to buy library and classroom materials. Mackin provides shipping, shelf-ready processing, and cataloging services for free. The company makes its money when the schools order their materials.

These days, those materials comprise more than books (though Mackin has 1.5 million titles from more than 18,000 publishers). DVDs, digital books, and subscriptions to educational databases on history, animals, sports, social studies, teen health and wellness, and other topics are also available and accessible.

So far, Tracy says, about 250 schools around the country have signed up for Funds4Books.