Though a national firm, M. A. Mortensson Company maintains many traditions. One of them: When they turn 15, the kids go to work in construction.
April 01, 2020 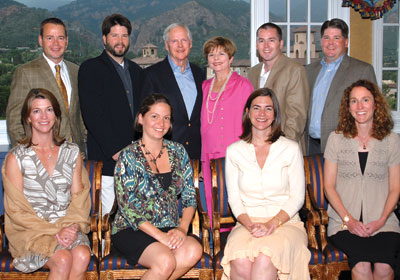 In the Golden Valley headquarters of M. A. Mortenson Company sits a replica of a tower crane with simulated controls. “My grandkids love to play with that,” says Chairman M. A. “Mort” Mortenson, Jr.

Mortenson’s desk is adorned by photos of his seven grandchildren’s first tours to construction sites when they were about five or six. They’ve yet to determine their own future, but they have been exposed to some of the company’s operations through job site tours with their grandfather.

Mortenson was 16 when his father started the company out of his Richfield home in 1954. In that first year of operation, the senior Mortenson secured 15 contracts totaling $424,000. In the 57 years since, Mortenson the company has built structures and facilities of all kinds, valued from less than $1 million to more than $600 million—in 47 states and overseas. The company now has six offices in the U.S., and international operations in Canada and China.

After earning a bachelor’s degree in civil engineering from the University of Colorado and serving two years as an officer in the Navy, Mort Mortenson joined the company in 1960 as an estimator and project manager, becoming one of four employees. In 1969, his father retired, leaving the business in his son’s hands.

Milestones soon followed. In the early 1970s, Mortenson was building multimillion-dollar projects. In 1981, the company opened its first branch office, in Denver; by 1986, Mortenson ranked as the largest general contractor in Minnesota, which it remains.

Despite its size, the Mortenson family still maintains many traditions. One of them: When they turn 15, the kids go to work in construction. That included Mort’s sons—David, Mark, Christopher, and Mathias.

Mark Mortenson says that he is no engineer or construction worker, but those summers of laying bricks and pouring concrete helped him understand what it takes to put up complex structures. “Our parents never once said, ‘You should think about engineering or you should be prepared to go into the business,’” David says. “They always encouraged us to pursue our own interests.”

David Mortenson, who joined the company in 1991, is now executive vice president, overseeing operating groups in the Midwest and Asia focused on high-tech manufacturing, health care, life sciences, corporate, and higher education projects. Mark, who practiced law for two years, initially came on board in 1990, returning in 1997 after two years in private practice; he now oversees the company’s investments. Mathias joined Mortenson three years ago after working in architectural firms in Chicago and San Francisco. Another son, Christopher, works as a science teacher in Hungary.

David and Mark remember the stressful early years, when Mortenson had projects that could easily make or break the company. When their father came home from work, he would have a set of plans, estimating sheets, a big calculator, scales, wheels, and colored pencils. As they were going to bed, their father would still be working.

Mort Mortenson acknowledges that he always wanted to have his company involved in larger buildings—project types that the company hadn’t done before. “I’d see somebody else building a neat structure and wish we could do something like that someday,” he says.

His company has. In addition to Target Field, the Xcel Energy Center in St. Paul, and the Minneapolis Convention Center, the family company’s portfolio includes the Walt Disney Concert Hall in Los Angeles, Coors Field in Denver, and the Mercedes-Benz Arena in Shanghai.

That said, the company also sees smaller projects—those worth less than $10 million—as the foundation to its business, and not just during slow times in construction. While Mortenson was finishing up on the $254 million TCF Bank Stadium at the University of Minnesota in 2009, it was also working on a $7 million plumbing-replacement job at a dorm on the other side of the U’s campus. During the recent downturn, Mortenson has taken jobs renovating small office spaces for new tenants. As a result, in the past five years, the company has averaged revenue growth of approximately 15 percent per year.

Mort believes that in order to foster the company’s growth, it is important to let the employees succeed. Mortenson University, the company’s career development wing, offers employees instructor-led courses, individualized on-the-job training, books, and online self-study courses. The Superintendent Career Learning and Development Program, for example, helps those who want to learn the skills necessary to move to a superintendent role.

Every adult Mortenson family member attends an annual family meeting to get an overview of the business and discuss business continuity. At the meeting, outside advisors educate family members on aspects of the business related to banking, finance, benefits, trusts, real estate, and economic analysis.

Mort’s wife, Alice, chairs the Mortenson Family Foundation, which was started in 1999 to make grants to nonprofits and institutions in the community. Donna Dalton, executive director of the foundation, says Mort and Alice engage all their sons and daughters-in-law in choosing where the grants go.

“I am continually amazed by the time they both give to the foundation,” Dalton says. “Through their hands-on work, they illustrate to the future generations the importance of the foundation.”