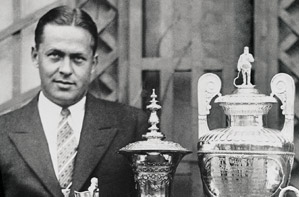 During the second round of the tournament, Jones pushed his tee shot to the right on the ninth hole along the bank of a lake. Attempting to go for the green in two, Jones was in the middle of his backswing when two young girls broke from the crowd and ran toward the fairway. Jones, catching a glimpse of them with his peripheral vision, flinched on the shot and topped the ball toward the lake where it struck the water some 20 yards short of the far bank. Amazingly, the ball skipped like a flat stone on the water and came out on the other side just 30 yards short of the green. Jones would chip to within two feet and finish the hole with an unlikely birdie. Although Jones would later refute the notion, spectators swore the ball had struck a lily pad floating in the lake. Forever dubbed the “lily pad shot,” this strange event merely added to the already larger-than-life legend of Bobby Jones.â©