For service to ADC Telecommunications
April 01, 2020 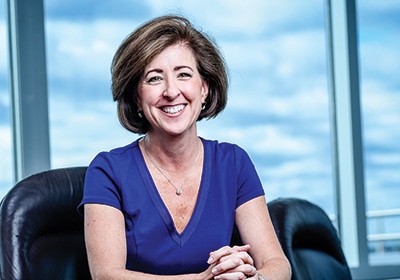 When it comes to being a director, “maintenance bores me,” says Lois Martin, chief financial officer at Bloomington-based Ceridian, a provider of human resources software and services. “I love joining a company and a board when the company is at a strategic inflection point, a company that is changing, facing significant challenges.”

Such was the case when she joined the board of directors at Eden Prairie-based ADC Telecommunications in 2004. At that time she was CFO of Plymouth-based World Data Products, and she became chair of ADC’s audit committee.

The landline-telecommunications equipment supplier had been one of the darlings of the Internet-related telecom boom of the late 1990s. After the bubble burst in 2000, ADC became a smaller, more focused company, and began climbing back to profitability. But though it shed employees and pursued new business, ADC found itself struggling in the last recession. In 2010, it received an unsolicited bid from Swiss-based TE Connectivity, then known as Tyco Electronics.

For Martin, it was the most challenging time she had ever faced as a company director. ADC’s board and management had to first determine whether the best thing for the company and the shareholders was to sell; then they had to be sure they were getting the maximum value possible for the shareholders. “The stakes were so high from a fiduciary standpoint,” she recalls. “It was all hands on deck.”

Fortunately, Martin had the kind of knowledge to help ADC sort through the complex issues the offer had raised. “Lois has a very strong set of accounting and finance tools,” notes J.A. “Gus” Blanchard, the former CEO of Deluxe who was ADC’s non-executive board chair from 2004 to mid-2009. “She really is an asset if for no other reason than for her strong financial background.”

While serving on the ADC board, Martin was noted for taking the time and effort to understand marketing and public relations, manufacturing and what the other business functions were all about, recalls Blanchard, who had recruited her to join ADC’s board. “She made people feel [that] her best interests were the success of the company.”

In addition, Blanchard says, “she did all of her homework before a board meeting, and so she was as comfortable asking questions about operations or the competition as she was about the financials. She was the best kind of director—very well-informed and comfortable asking pointed questions, which is the role of a director.”

After months of deliberation, ADC accepted TE Connectivity’s offer in July 2010. The price was $12.75 per share in cash, an enterprise value of approximately $1.25 billion. “At the end of the day it was the right thing for the shareholders,” says Martin, who is a firm believer that a good director is also aligned with the shareholders, not just management.

Serving on boards during times of flux can be challenging, to say the least. Martin recalls one board she sat on where the company was faced with rapidly developing technology, fast-changing consumer preferences and new competition.

“I thought the board was being too passive, and as directors we were not knowledgeable enough about the situation,” she says. She relayed her concern to the other directors, convincing them that the situation was urgent. They agreed to bring in external thought leaders to quickly get a better handle on what was happening in the market space.

“I’ve enjoyed the diversity of the boards I’ve been on—both the people and the industries,” Martin says. “Being a director provides you with the opportunity to learn. You push yourself into new, challenging environments. It keeps you sharper.”