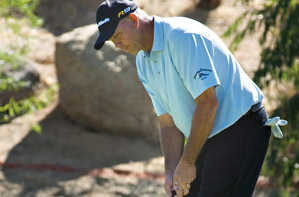 In the ’80s, my business started in Alexandria. After work, I would regularly hit balls on the range of the Alexandria Golf Club. Another guy was a range rat like me—Jim Lehman, Sr. We spent hundreds of hours whacking away together and became friends.â©

One day he called me and asked if I would take his son, Tom, out to a course where I belonged in St. Paul—Somerset Country Club—for a practice round [to prepare for the] upcoming sectional U.S. Open qualifying event there. I had heard of Tom. He was a state golf star, but after many tries, he could not seem to capture his tour card.â©

Tom showed up on a Sunday, and the two of us played. I was a three handicap and the club champion at the time. I looked forward to our play and hoped to show him some good golf.â©

We teed off, Tom hitting a low, long, burning draw. It’s what I saw all day. But his iron play is what struck me. Shot after shot went right at the flagstick. Whether he had a 10- or 30-foot putt was determined by whether he shot long or short—never by whether he had pushed or pulled it. For Tom, unlike me, it was a game of length, not of width. It was like watching darts being thrown. Incredible. And this from a guy who couldn’t get his card!â©

I was a decent golfer, but that was the day I realized I had no idea how the game is really played. That day certainly didn’t change Tom’s future, but from then on, I knew what good ball striking was—and what it wasn’t.â©