This creative services firm, which donates half its profits to charity, sees the world as its extended family—and its mission as key to its success.
April 01, 2020 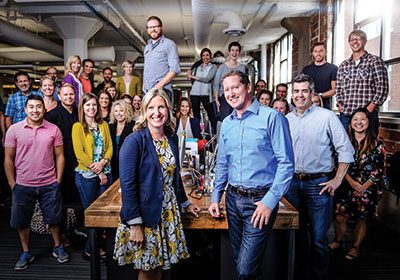 Minneapolis-based Latitude is only six years old and is already creating marketing materials for several major brands. But that’s the means to an end. “The company exists to help people out of poverty,” says Krista Carroll, Latitude’s owner, who works side-by-side with husband and company president Jeremy. And the clients their agency has attracted share their values.

Under Armour, Foot Locker, Ann Taylor/Loft, Puma and Petco are a few of the firms for whom Latitude provides brand strategy, retail signage and high-end specialty printing services. Half of the profits Latitude generates from such projects go toward self-sustainable programs that provide food, water, education and micro-loans to communities in countries throughout the world. Among the micro-loan recipients is Sophie Dialembo, who used the money to open a walk-in clinic in her Kinshasa neighborhood in the Democratic Republic of Congo.

This feel-good approach to their work has translated in various ways to the Carrolls’ employees, some of whom are family members. A visit to the company’s North Loop office on a recent Friday morning found creative and administrative employees bustling between open workstations as a week-ending snack buffet was being laid out in a common area. The managerial staff includes an uncle, an aunt and a cousin of the Carrolls; employees’ children (including the Carrolls’ four) are a regular presence. The company’s 36 employees believe that, in many cases, clients choose Latitude based on the combination of both the company’s creative ideas and its social priorities.

“Clients see us as likeminded because of the social mission,” says Jason Strong, an executive creative director with the company. “That saves a lot of pitching and leads to getting work quicker.” Chris Thorson, a production design director who joined Latitude this year, says he was asked about his family more times during his first week than he had been during the entire time with his previous employer. “Just the acknowledgement that you have a life outside of work is huge,” Thorson says.

2006 – Jeremy Carroll, a member of the family that owns Minneapolis-based Diversified Graphics, moves with his wife, Krista, to New York City to run the company’s sales operations there.

2009 – The Carrolls cofound Print 4 Change in New York City; the social enterprise business model is inspired in part by a charitable trip to Haiti.

2011 – A team from Print 4 Change travels to Haiti to assemble the refurbished playground purchased through Kids Around the World at Healing Haiti’s Grace Village.

Latitude pays for construction of the ninth-grade classroom at Emprendadora Entrepreneur School in Nicaragua.

The Carrolls’ vision of an endless extended family also has helped build remarkable client loyalty. Christiana DiMattesa, a retail marketing senior manager at Under Armour, has known Jeremy Carroll since before Latitude existed. At her previous stints at Foot Locker and Ann Taylor, DiMattesa brought in Carroll to source printing work. At Under Armour, she was willing to hire Carroll and Latitude to provide creative work for the brand. Latitude’s work for her company includes helping it design its recent store-in-store Opto Jump Digital Experience located in Under Armour’s new “Brand House” store in Chicago.

“We needed a partnership with someone reliable,” DiMattesa says. “We try to find agencies that represent what we represent, whose ideals match ours.”

Latitude’s ideals were forged in many respects at the company founded by Jeremy Carroll’s grandfather. In 1949, Bob Gacek started Diversified Graphics, which became a leading Minneapolis printing company. Gacek, along with most of his children and several grandchildren, ran Diversified for almost six decades before it was acquired 10 years ago. Jeremy’s mother, Paulette Carroll, and aunt, Sharon Brueske, performed all of Diversified’s fulfillment work through their hand bindery business, and Brueske now directs Latitude’s accounting.

“I loved everything about Diversified Graphics,” Jeremy Carroll says. “Growing up in that business and being a part of it every day made me want to give my kids the opportunity to be in an environment like that.” One of the aspects that he loved was Diversified Graphics’ involvement in numerous charities—serving holiday meals at Sharing & Caring Hands on Christmas Eve and Thanksgiving Day, participating in annual Toys for Tots drives, and supporting the ministry of Brother DePaul, founder of the House of Charity in Minneapolis.

In 2006, Jeremy Carroll moved to New York City to oversee Diversified Graphics’ sales operations there. He was joined by Krista, whom he met at a church camp in 1991 and married 10 years later. The impulse to start his own firm began with Diversified’s sale to Bolger, then intensified the following year when he went on a charitable trip with Healing Haiti, a faith-based nonprofit co-founded by his uncle that organizes humanitarian trips to the impoverished Caribbean nation. Upon their return home, he and Krista saw an opportunity to create a different kind of business, combining his print background with their desire to do good in the world. In 2009, they started Print 4 Change with a partner, Joey Perry.

Print 4 Change began as a print brokerage, but when the Carrolls moved back to the Twin Cities in mid-2010 to be closer to their families, they realized that the combination of their talents and their contacts could take them in a different direction. They found some Twin Cities printing companies struggling to generate leads during the downturn, but with equipment and employees ready to work.

“We had the choice of building a printing company or building an agency,” Jeremy Carroll says. “There are a lot of great printing companies around here. We wanted to be a source of additional business for them in addition to building our own business.” With their contacts on the East Coast and elsewhere, Print 4 Change was able to attract clients and put those printers to work on high-end retail projects. In 2012, Print 4 Change changed its name to the more “brandable” Latitude.

The relationships that Jeremy Carroll had built as a print vendor for major brands gave them the confidence to follow him when his company added creative services to its capabilities in 2013. Those clients were also attracted to the company’s mission. The Carrolls launched the company with a five-year goal to invest $1 million in the developing world. It has surpassed that goal, with room to spare. Since its founding, Latitude has donated nearly $2.3 million to numerous charitable causes—last year alone, it gave more than $500,000. In addition to Haiti, the Carrolls have traveled to Ethiopia, Nicaragua, India and other countries with the nonprofits they support in order to meet some of the people who benefit from their services, which range from providing micro loans, education, meals and clean water,to freeing people from slavery and helping to protect children. Latitude employees often accompany the Carrolls on their trips; clients and friends also have participated in many of these excursions.

Doing good hasn’t prevented Latitude from doing well. It’s on track for $21 million in sales this year, and it has been profitable from day one, thanks to a combination of no startup debt, eager-to-help friends and a first office that was also the Carrolls’ New York apartment.

Krista Carroll describes her husband as the visionary of the outfit whose charge is scouting and securing new clients while she takes on management and staffing chores. The company’s attorney, Aaron Hall, sees that combination as the perfect blend of right brain and left brain. “Jeremy is one of the most creative people I know, and Krista is very analytical and grounded,” says Hall, a partner at Thompson Hall Santi Cerny & Katkov firm in Minneapolis. “They make a great team because their strengths are so different.”

Hall notes, however, that the altruistic focus of the Carrolls and Latitude isn’t embraced everywhere. The Carrolls themselves suspect that many businesses distrust their mission, believing that the focus on charitable endeavors might detract from the quality of the work. “But the [clients] who are on board with it find it has more meaning than just a transaction,” Hall says. “So Jeremy and Krista attract people who have common core values.”

In addition to its North Loop headquarters, Latitude maintains an office in New York, run by Perry, and just opened its third location in San Francisco. Latitude also recently opened a fulfillment warehouse in Medina that hires Minneapolis teens via a nonprofit staffing service that works with the Minneapolis school system. It’s another example of how the company strives to put its money where its heart is.

“Our overall company mission makes us work with urgency,” Krista Carroll says. “We make a point of over-delivering for our clients, so that we can deliver for people who need help.” As her husband puts it, “This is a family business that’s not only about our family.”