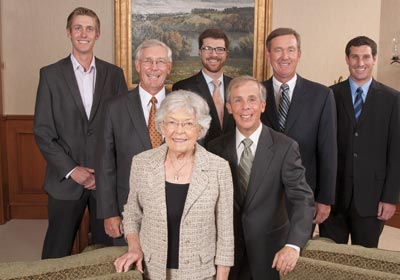 You might be one of those who think of Chaska simply as an outer-ring Twin Cities suburb. But make no mistake: The Carver County seat, population 23,770, retains much of the distinctive character it had more than a century ago, when it was a center of brick production in Minnesota. Brothers Charles and Christian Klein owned and operated the last brickyard in the town when, in 1907, they took over the troubled First National Bank of Chaska. The brickmakers became bankers, and the First National Bank of Chaska became the foundation of a banking group, now called KleinBank, that comprises 19 branches in 17 southern Minnesota cities, including Shakopee, Burnsville, and Plymouth in the metro area, extending as far west as Montevideo. It is the fifth-largest bank by asset size in Minnesota.

The Klein family has long had a reputation for rock-solid—brick-solid, if you will—practices and management. It’s a legacy that the third generation of the family banking company’s leadership has been working hard to preserve. George Klein, the second generation of family leadership, united the banks under the management of a single company called Klein Bancorporation (now Klein Financial). Upon George Klein’s death in 1979, his son Dan became chairman, president, and later CEO of the family’s banks. He and his brothers unified the family’s bank system even further, combining all of the banks into a single charter and rebranding all the branches under the name KleinBank.

In 2009, he and his brothers, wishing to retire from day-to-day management, hired an outsider to become the family business’ new CEO and president. They tapped Douglas Hile, a 35-year industry veteran with extensive top-executive experience for the Pohlad family’s banking concerns.

Why not choose a family member for the top spot at the bank? “The fourth generation is all in various stages of development,” says Dan Klein, the chief spokesperson for the third generation. “They were not ready to take the CEO position.” In hiring Hile, the Klein family could draw from the long experience of a successful banking executive, one who could “keep [KleinBank] growing in a profitable and safe manner.” And, Dan Klein adds, Hile had “successfully introduced new ideas at other banks.”

Among those ideas is the development of a strong digital presence. “More and more of our customers expect the bank to be available electronically,” Hile says. KleinBank, he adds, has the resources to deliver these services in a more high-touch manner than larger banks. A close relationship with the customer, Hile says, “has been our recipe over the years.”

In addition to the three brothers, who serve on the company board, four members of the fourth generation work for KleinBank. They are Matt Klein, market president, retail; Christian Klein, business banking officer; Jeff Klein, treasury analyst; and Kevin Klein, credit analyst. None of those positions is a sinecure. “We do not create jobs for any family members,” Dan Klein says. Each member has to “qualify for a posted position.” What’s more, he says, “it is not set in concrete that we will have any family members running the business. That will be determined by their ability to reach their full potential.”

To prove themselves, the members of the next generation are encouraged to earn a college degree in an appropriate field. What’s more, each aspiring family member working for KleinBank has to have work experience outside the family business, Dan Klein says. “We believe that establishes a very good perspective.” It offers the fourth-generation members the chance “to see how other companies are run—what works and what doesn’t work, and what other cultures are created in those types of situations. And of course, we hope that they will achieve a great deal of learning and greater competencies.”

Career development has not been solely the responsibility of the fourth generation. The third generation has put into place a number of initiatives to help each family member working for the company develop his or her talents. Each has a personal development plan, with professional milestones to meet, as well as coaching and other mentoring activities overseen by KleinBank executives. Fourth-generation employees also participate in a monthly meeting of KleinBank’s client development group, where relevant banking industry topics are discussed, to keep executives as well as family members involved in the business up to date on the fast-changing banking industry.

KleinBank’s 12-person board consists of the three third-generation brothers, who represent the family’s interests, along with nine non-family members. All shareholders—the 10 Klein family members who have an ownership stake in the business—are invited to annual meetings, where topics include career development for those working for the company, as well as estate, succession, and tax planning.

While the Kleins, Hile, and the board work to keep the banking company, its employees, and the family members au courant with the evolution of the industry, many aspects of the business haven’t changed. One is a commitment to the communities it serves, particularly the one where it began. That commitment extends, of course, to the bank’s customers, many of whom have been working with KleinBank for years.

Some have been banking with the Kleins for an extremely long time. One such customer is Ess Brothers and Sons, which distributes and manufactures sewer system products, such as manhole covers and railings and other metal fabrications for road construction; in fact, it was a customer of the bank before the Kleins bought it.

In 1987, Ess Brothers moved from Chaska, where it was founded in 1867, to Corcoran. But the company remains a customer of KleinBank. “They’re a family-owned business, and we can relate to that,” says Trent Ess, member of the sixth generation of the firm and its CFO. “They’re dedicated, hardworking, and they put the customer No. 1. If you send them an email with a request, you know the task at hand is going to get done.” KleinBank had to work particularly hard during the recent downturn. In the depths of the recent recession, Dan Klein says that KleinBank worked with its financially strapped business clients to lower loan burdens; the bank, meanwhile, maintained a stable capital position and added reserves, despite the deterioration of real estate values and local business earnings. With the economy improving and a new generation building on its potential, the Klein family has focused on strengthening a firm foundation on which more and more bricks may be laid.