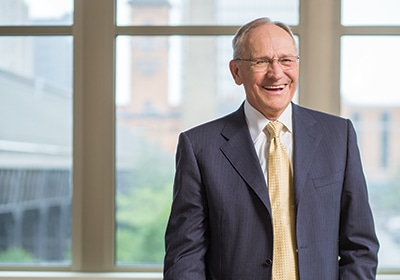 In the land of 10,000 hidden assets, John Somrock has quietly spent more than two decades advising and consulting with a diverse group of corporate and nonprofit boards, along the way forging an impeccable reputation for providing priceless guidance.

While some may remember him from years ago, when he ran several local companies including natural gas utility Minnegasco (now owned by CenterPoint Energy), Somrock may best be known today for his board service at Delta Dental of Minnesota. He joined its board in 1993, served as chairman from 2006 to 2013, and remains on the Minneapolis-based dental insurer’s board as chair emeritus. He also serves on the board of the Delta Dental of Minnesota Foundation, of which he’s also a past chair.

Mark Sheffert, chairman and CEO of Minneapolis-based restructuring firm Manchester Cos. Inc., recalls working with Somrock when Manchester was retained to help Delta Dental deal with a contractual dispute.

“It was important enough that it required a group to work on it that was made up of the board and outside advisors,” recalls Sheffert. “It was a very difficult, very complex, acrimonious dispute. It required artful leadership. It’s always easy to go to litigation, but I think with John’s support and guidance and help, the dispute got resolved in a successful manner.”

Sheffert notes that Somrock has an effective, analytical and low-key style, leading discussions by asking questions rather than leading with his own opinion.

“He’s not going to be the kind of leader who stands up on a table and jumps up and down and demands that the board do it his way … board management is consensus management. It’s not a dictatorship,” adds Sheffert. “He’s not a heavy-fisted, heavy-handed guy at all. He’s an artful consensus leader.”

While nonprofits typically aren’t dealmakers, Somrock led the Delta Dental board when it sold off its claims processing operations, DeCare Dental, for $100 million to health insurance giant WellPoint Inc. in 2009. The money was used to launch the Delta Dental of Minnesota Foundation, with a mission of improving oral health across the state.

“It took us over two years,” says Somrock. “What we were really doing was taking Delta Dental from being mostly a business institution and making it community-centric: That’s why we were creating the foundation. What we were able to do was monetize that asset by selling it to WellPoint.”

An Ely native and University of Minnesota graduate, Somrock joined Minnegasco as a design engineer in 1968, rising to president in 1985. He later became CEO of the E.F. Johnson Co. and EnScan Inc., two companies in the portfolio of the holding company that then owned Minnegasco. He led the sale of both E.F. Johnson and EnScan, then began life as a consultant in 1992.

“His approach to decisions, strategy or opportunities would include all constituents, both internal and external, in the decision making process,” says Rodney Young, president and CEO of Delta Dental of Minnesota. Young joined the Delta board in 1998 and became the insurer’s CEO at the beginning of 2012. He says that Somrock brings a big-picture view to all issues before the board, and has a knack for considering all the angles.

Somrock says that while for-profit businesses and nonprofit entities deal with some different issues, “fundamentally, businesses are pretty much the same when you really get down to it. You’ve got customers, you’ve got products, you’ve got employees, and you’ve got stakeholders—whether it’s the public for a not-for-profit like Delta, or shareholders in a Nexen Group or any other for-profit company.” (Nexen Group is a Vadnais Heights manufacturer of motion control products.)

For Somrock, the most important role of the board is clear: to make sure that the right leader is in place.

“I think that a paramount job of a board is to properly choose a CEO, to properly work with that CEO, support that CEO, guide that CEO and then make sure there is a robust succession plan in place for all of the senior management positions, including the CEO,” says Somrock, whose consulting work includes mentoring chief executives. “Corporations who lose CEOs and have to dismiss CEOs become somewhat rudderless. I think the most important role the board has is to put the right CEO in there.”

Finding the right leader is a huge responsibility and undertaking for a board. And Somrock says that people who have the notion that board service doesn’t involve much work are probably doing it wrong. In Somrock’s view, board work today calls for steady homework to get a clear sense of the big picture. “It’s hard to really make a contribution unless you get yourself involved and understand the company and its place in the market,” he adds.