The Room & Board founder turned his love for stylish, affordable design into a modern-furnishings powerhouse.
April 01, 2020 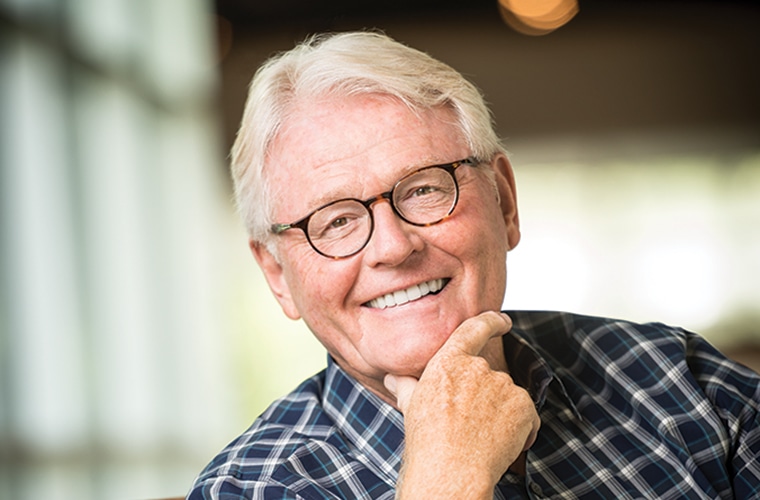 When was the last time you risked your life for an ottoman? For fans of Room & Board, the answer is this past April 14, when something called a “thunder blizzard” hit the Twin Cities like a bad joke. While most locals waved a white flag from the comfort of home, a few diehards braved whiteout conditions to browse the stylish furniture retailer’s Golden Valley outlet store. Sales were roughly $100,000 that day. That’s lower than average, but not at all bad given the historic weather and the showroom’s early closing, at 2 p.m.

Room & Board has its share of storm-chasing loyalists, sure, but it’s also more broadly popular, with 17 stores nationwide, annual sales of more than $400 million, and a nifty website that will soon account for the majority of its revenue. Known for its quality furnishings at mid-level price points, the retailer’s secret sauce is its market position, about halfway between Wayfair and those luxury brands that require you to “ask about our prices.” For fans of modernism, Arts and Crafts, and other kindred design styles, Room & Board offers attainable membership in the high-end furniture club. Its clean-lined sofas and tables are equally at home in The New York Times Style section and Anytown, USA.

The man behind the accent chair is John Gabbert. Like many innovators, the Room & Board founder peppers his speech with philosophical soundbites. Asked about R&B’s mystique, he says, “A piece of solid wood has soul to it. It changes your life. How you organize your home and what it feels like changes how you interact with people.” But behind those gauzy sentiments is something solid and durable.

Home furnishings are in Gabbert’s name and DNA. Seven years after his birth in 1946, his parents, Dan and Louise, transformed their tire and appliance store in downtown Minneapolis into a furniture showroom. They moved the business to a standalone Edina location in 1959, christening it Gabberts Furniture. Since then, Gabberts has been one of the Twin Cities’ premier sellers of traditional-style furniture. (In 2009, Gabberts was acquired by Coon Rapids-based HOM Furniture.)

“I remember wandering the Edina store as a kid—it was cramped in there, but I loved it,” says Gabbert by phone from Santa Barbara, Calif., where he winters with his wife, Martha. (They spend the other half of the year on Lake Minnetonka.) He later walked that Edina showroom as a salesperson, then a merchandiser, then a general manager. By his mid-20s, John Gabbert was president of the company and in line to buy out his father’s stock in the operation. But by his own admission, the younger Gabbert was an arrogant upstart with radical ideas for the family business.

“I believed, and still do, that people should be paid salaries to help customers,” he says. “My father thought you should pay on commission. He was stuck in the old way of doing things, and I was looking at what was new.”

Gabbert thought he found that new thing in the early 1970s, when he visited an IKEA store in Sweden. He was impressed by its inexpensive modern furniture and customer-friendly layout, and when he returned home, Gabbert launched a couple of small stores in Denver and Edina whose furniture followed the IKEA model. When his father threatened to shut down the new subsidiary, Gabbert sold his part of the family business and went solo. “It caused a rift,” Gabbert says of his decision. “There were about 10 years where I saw a lot less of my family, though we eventually made amends.”

In launching Room & Board in 1980, Gabbert designed all the pieces himself—everything from Scandinavian-style loveseats to modern dishware. To keep costs down, he outsourced production overseas, using particleboard and other inexpensive materials. Bigger pieces often came with a “some assembly required” caveat.

“In the late ’80s, I realized that our customers, who were primarily baby boomers, were becoming more affluent,” he says. “They had progressed in their career. They had a family. They no longer wanted furniture that was temporary.”

So Gabbert traded particleboard for solid wood, raised his prices, and no longer asked customers to complete the assembly process. At the same time, however, he kept the modern aesthetic he loved. You can think of this design movement as an antidote to the frilly, ornamental design of the Victorian Age. While there are many schools within the movement, modern home furnishings are generally characterized by clean lines, smooth surfaces, and an overall minimalist aesthetic. And unlike Victorian design, modern dÃ©cor is meant to be highly functional.

Going all-in on modernism—which wasn’t yet the HGTV-certified phenomenon it is today—was risky. But Gabbert believed Room & Board could help popularize his beloved aesthetic. He was right. In 1993, the company broke even for the first time and opened a showroom in Chicago. New locations followed, including San Francisco and New York. He also opened a series of house-run distribution centers and took control of his supply chain by hiring small American vendors to manufacture exclusively for Room & Board. More than 93 percent of the company’s wares are made in the U.S., including steel furniture produced by Minneapolis-based Bell Manufacturing.

By the mid-2000s, Room & Board’s revenue was well over $200 million. “When we refocused to provide exceptional value and design,” Gabbert says, “that’s when it came together for us.”

Over the years, Gabbert has turned down outside investment in favor of slow, steady growth, a strategy that’s become something of a business-school case study. Case in point: In his book Smart Growth, University of Virginia business professor Edward Hess writes, “Based in Minneapolis, Minnesota, Room & Board’s story is one of contrarian success; it is a company that eschewed the standard retail-industry business model, disavowed debt and equity-growth financing, and embraced a unique, multiple-stakeholder model that valued quality and relationships ahead of the bottom line while producing stellar financial results.”

Hess got everything right (except Room & Board’s home base—the company is headquartered in Golden Valley). And not everything Gabbert has done has succeeded. You might remember those Retrospect stores from the late ’90s, which promised a more traditional spin on Room & Board. Gabbert describes the failed concept, which sold “antique-inspired” furniture in Room & Board stores and lasted from 1998 to about 2004, as “wandering off away from what we were really about.”

But that lapse was atypical. Gabbert “thinks things through and knows exactly what he wants,” Room & Board president and COO Bruce Champeau says. Champeau tells of the time he and his boss met with one of Room & Board’s vendors, a woodshop in Vermont. On the flight there, Gabbert grabbed a cocktail napkin and quickly sketched a design for a new dresser. When they arrived at the woodshop, he handed the napkin to the owner. The dresser went on sale not long after.

“I think the key to being a good leader is to trust yourself and those around you,” says Gabbert, who at 72 is no longer part of the everyday business but is still heavily involved in picking new locations and creating new products. “But really, I don’t even think of myself as a leader,” he adds. “Instead, I lay out broad philosophies you can live by.”

As if on cue, the modern-furniture guru delivers a parable. Once upon a time, Gabbert’s tennis instructor asked how his game was going. Gabbert told him about a recent match he had won, relaying the exact scores of each set. The instructor stopped him and said, “People get too hung up on keeping score and comparing themselves to others. You should compare yourself to yourself.” In assembling his distinctive furniture company, that’s exactly what John Gabbert has done.