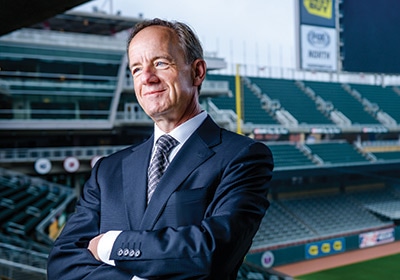 Best Book I’ve Read This Year:
All That Is by James Salter or Canada by Richard Ford

Jim Pohlad is the Pohlad family member with day-to-day oversight over the Pohlads’ investment in Major League Baseball. His involvement with the team dates to 1986, when his father Carl bought the Twins; it ramped up substantially in 2004, and his ascension became official after his father’s death in 2009.

Explain to us your role in the management of the ball club, if you will.

The team just completed its third 90-plus loss season, but ticket sales averaged more than 30,000 per game, salary commitments have fallen, the ballpark has many revenue streams. Does losing hurt the bottom line?

Poor performance will always be out ahead of poor financial performance. 2010 was the best year in our ownership history. It’s been declining ever since, and if we don’t improve it will decline next year.

So you’re not losing your way to better returns.

Was this three-year slide inevitable after a decade of strong teams and playoff appearances? Is that the nature of the game?

To answer simply, no. But it can be hard to avoid. There are all sorts of different models in the game. There are teams that are highly cyclical; take Pittsburgh. Then there are teams that win consistently— St. Louis, Atlanta. Those are the role models. We’d rather not be cyclical and we’re in the middle of an analysis of the differences between the organizations that are cyclical and those that are not.

Did ownership have a role in this down cycle?

I was probably not pushing enough in the good years. We became self-satisfied. We took our eye off the ball.

Is it time to bring some new blood into your player development operation?

The most efficient dollars you spend are spent on player development and scouting. So we should have the best people doing that. Who wouldn’t want to work for Terry Ryan?

You’ve said Terry’s job is secure and you can’t imagine a circumstance when it wouldn’t be. Why?

I see the respect he gets in the industry. And finding talent is his specialty.

Some of the most successful small/medium-market MLB teams employ data and metrics in finding players, using it to verify or refute the subjective take of scouts. The Twins are perceived to be resistant. Fair?

Data is valuable. There are organizations, the Twins were one, that were slow to [adopt] it. But when you all have the same data, it comes back to the human element.

And you believe you have the same data.

The Twins value loyalty and continuity to the point that the organization can seem insular. How do you break a cycle of losing when you only promote people steeped in the same ideas and culture?

Well, in order to have the “Twins way” be successful, you have to have a methodology, but you also need players. We do embrace new perspectives. Loyalty and low turnover can inhibit that, I admit. We need to always be asking ourselves if we have the right mix of people, policies, and procedures to develop the right players.

And Ryan is open to that?

We’re pressing him on it. I’m not saying Terry isn’t somewhat old-fashioned. He is. But he wants to win.

How have team economics trended at Target Field?

Overall it’s been incredibly positive, but attendance is down due to poor play and the lack of the novelty factor. But our team that creates the fan experience has really stepped up. We’re constantly upgrading and we’ve built it from scratch. At the Metrodome we had very little control or responsibility for the fan experience.

There has been talk that the Houston Astros, who lost over 110 games, are quite profitable. Is baseball foolproof at this point, from a P&L standpoint?

Do you think luck plays a role?

Clearly. [For example, whether] your players stay healthy.

How do you share your thoughts and opinions with St. Peter and Ryan?

I talk to Dave a few times a week; Terry less so. The toughest thing for an owner is patience and avoidance of meddling, thinking I know something more than Terry does. It’s a temptation. I’ve got to keep saying to myself, “What are you thinking?”

How many games do you attend a year?

I’ve never electively missed a game if I am in town.

How committed is the family to owning the Twins?

Very. My nephew Joe Pohlad works for the team. We’re in it for the long term and that next generation. And I’d add this team is 100 percent family-owned, which is very rare today. There are no investors or minority shareholders.

We have a lot of prospects, but most aren’t quite ready. We don’t have a lot of trading inventory. We have to go into the marketplace. Terry knows that. I’m not encouraging him to wait.