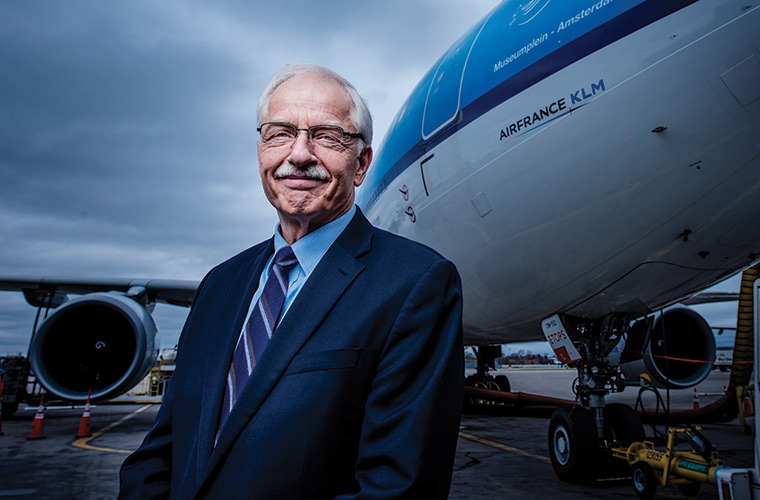 St. Paul native Jeff Hamiel had his first taste of flight when he was 10 years old, cruising over the fields of Sheldon, Iowa, with his older cousin, who was a pilot. That’s when he discovered he wanted to fly. In a way, Hamiel got his wish.

After a lifetime working in aviation, he retired last spring from the Minneapolis-St. Paul Metropolitan Airports Commission (MAC). Serving 31 years as MAC’s executive director and CEO, Hamiel oversaw the operations of Minneapolis-St. Paul International Airport (MSP), the nations’ 16th-busiest airport in passenger traffic, as well as those of six reliever airports in the Twin Cities metropolitan area. His MAC career encompassed 9/11, airline deregulation, airline bankruptcies and mergers and a huge boom in passenger travel.

Through it all, Hamiel says, he has never wished for a different career, even though the one he had didn’t precisely match his childhood desires.

Hamiel initially intended to be a professional pilot. After joining the Air Force Reserve Officers’ Training Corps (ROTC) at the University of Minnesota Duluth, he joined the Air Force and trained as a pilot at Vance Air Force Base in Enid, Okla. Seven years of active Air Force service followed.

“I thoroughly enjoyed the military and would have made it a career if I’d been in a different command,” Hamiel says. “But I wanted to fly, and I was only getting to do that two or three times a month.” So he quit the military, only to find that airlines weren’t hiring pilots.

MAC, however, needed someone as its new noise abatement and environmental affairs manager, so Hamiel took the job. “When I got here, a lot of people were angry about noise,” Hamiel says. “They didn’t understand why the airport operates as it does.”

Hamiel and his colleagues worked with airline manufacturers, promoting quieter engines, as well as with airlines to improve flight procedures. Hamiel also helped develop one of the most extensive airport noise mitigation programs in the U.S., which has helped insulate more than 18,000 homes around MSP. “I got a reputation for being straightforward and honest,” Hamiel says. “I liked the environment and the people here—liked the energy of the airport and the constant changes, plus I got to be in the community several times a week.”

MAC fit him well, he says—so well that he turned down a later offer to become an airline pilot. “I liked coming to the same place every day, seeing more opportunities, making a difference,” Hamiel says. Plus the job didn’t require him to give up flying. After leaving the military, Hamiel joined the Air Force Reserve and flew C-130 planes to Central and South America on drug interdiction programs and civilian medical evacuations. He retired as a lieutenant colonel in 1998.

Because he’s also a private pilot, MAC let Hamiel fly himself to business meetings when it was more cost-effective than a commercial ticket. “I used to fly to Duluth, Grand Forks, Milwaukee, Denver and Kansas City for meetings, and I fly now for proficiency and fun,” he says.

“Something happened every three to five years, but that just kept the job interesting,” Hamiel says. “I never seriously considered leaving.”

Though it wasn’t the pilot’s job he’d first wanted, his positions at MAC have made good use of his military experience. “I was an aircraft commander flying across the country and across the Atlantic in my early 20s, with significant responsibilities at a very young age,” Hamiel says. “I learned leadership, following timelines, holding people accountable and getting the job done, plus I got a good understanding of airplanes and flying.”

The Air Force influenced the management philosophy he evolved during his years on the job, he says, even though he didn’t replicate military structure at MAC. “The military gave me a strong foundation, but I’m not a ‘yes sir, no sir’ kind of person,” Hamiel says. “You have to learn to respect the contribution that people make. I start by believing that people want to do good work and make this organization successful, and my job was to facilitate that good work.”

He has disciplined and fired employees, but rarely, he says; he prefers to choose employees who take pride in their work. MAC grew from 285 workers when Hamiel arrived to 600 at his retirement. “I used to speak to our employee groups and say that all of your contributions are more important or as important as my contribution. If the snowplow drivers don’t show up for work, or if the plumbers don’t stop the leak in the terminal building, it becomes a serious issue. I could disappear from my job for a week or three and the place would continue running just fine.”

Hamiel is happy to let good people do their jobs, says MAC director of public affairs and marketing Patrick Hogan, who worked under Hamiel for 16 years. “Once he trusts you, he’s happy to get out of your way and let you do your work,” Hogan says.

In a statement last year, MAC chair Dan Boivin described Hamiel’s impact on Minnesota’s air-travel industry as an indelible one. “Under his leadership, Minneapolis-St. Paul International has earned a reputation as one of the nation’s best-managed airports. He has provided a steady hand to keep air service strong in Minnesota, not only in good times, but also when airlines one after another were filing for bankruptcy, merging and discontinuing hub operations at other airports.”

Even away from a jet cockpit, it seems Hamiel is still a pretty good pilot.

1947 – Born in St. Paul.
1970 – Obtains a B.A. in geography and aerospace science from the University of Minnesota Duluth.
1977 – Begins working at the Metropolitan Airports Commission (MAC) as its first noise abatement and environmental affairs manager.
1983 – Named director of operations and airport director of MAC; becomes executive director and CEO in 1985.
1989 – Metropolitan Airport Planning Act becomes law and MAC begins developing competing plans—build a new airport or expand the existing facility.
1996 – Legislature votes to expand the existing airport and MAC begins the $3.2 billion expansion.
1998 – Retires from the Air Force Reserve as lieutenant colonel.
2001 – Becomes chairman of the Airports Council International-North America.
2003 – Inducted into the Minnesota Aviation Hall of Fame.
2007 – Earns doctorate in public administration from Hamline University.
2016 – Retires from MAC.