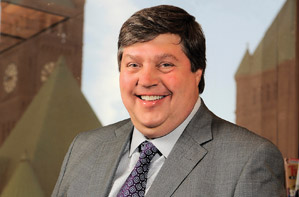 Jay Novak has been the top editor of every major business-focused publication in Minnesota. Among his colleagues across the country, he is considered one of the business-publication industry's most influential gray eminences—despite the fact that he actually has very little gray.

But there's more to Jay's business story than writing, editing, and publishing. His diverse 34-year career also comprises corporate communications, government service, and investment banking. He is a journalist who knows intimately and profoundly the struggles, challenges, creativity, and joy that enterprising individuals experience.

“So many entrepreneurs are among my favorite kinds of people—tinkers, thinkers, inventors, and innovators,” Novak says. “Stories of entrepreneurial achievement that we hear are not only compelling, but also comforting. They remind us that enterprise is enduring.”

Novak began his career in the Twin Cities at a magazine that covered the Upper Midwest banking industry. Within a few years, he was editing two Twin Cities business publications—City Business, a weekly newspaper; and Corporate Report, a monthly magazine. After a stint as General Mills’ director of communications in the early 1990s, Jay took charge of a new business magazine. During his nearly three years as its top editor, Twin Cities Business Monthly became the largest and most respected business magazine in Minnesota, and a model for many other such publications across the country.

In 1996, Jay's career took a remarkable turn when Governor Arne Carlson appointed him commissioner of the State of Minnesota’s Department of Trade and Economic Development. As commissioner, he oversaw a department that provided funding for numerous economic-development projects, encouraging business activity throughout the state. After Carlson left office in 1999, Jay became an investment banker at the Minneapolis firm Miller Johnson Steichen Kinnard, where he originated corporate bonds and raised money for a hedge fund.

In 2001, Jay returned to Twin Cities Business (the magazine dropped the “Monthly” from its name in 2006), this time as both as editor in chief and as publisher. During his second administration, he has guided the development of numerous revenue-enhancing ideas, including special events and bonus publications. On the editorial side, TCB has been named “Best Regional Business Publication” for six of the past 10 years, and has also won numerous writing, editing, and design awards.

At the end of this summer, Jay will retire as editor and publisher of Twin Cities Business. But he won't exactly be retiring. He’ll be associated with a limited partnership investing in distressed bonds, and serving on the boards of six nonprofit organizations, including the Hamline University School of Business.

While Jay has many more years of service and accomplishment ahead of him, he has already lived a lifetime of enterprise.