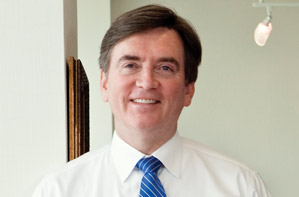 In 1993, Dolan teamed up with the Minnetonka-based financial advisory firm Cherry Tree to purchase Finance and Commerce, a daily Minneapolis business tabloid. It was the first publication of what became Dolan Media, now the nation’s second-largest publisher of metropolitan business newspapers.

The evolution continued in 1995, when Dolan acquired a small regional public-records company and used it as a springboard to build Dolan Information, which became one of the nation’s largest databases of information such as bankruptcy and foreclosure records before it was sold in 2003. On May 26, 2010, Dolan Media Company was rechristened the Dolan Company to reflect the fact that two-thirds of the company’s revenues are now generated by its Professional Services Division, which provides specialized assistance to the legal profession.

Life as a Minnesota-based media and marketing mogul is a long way from Dolan’s 1971 graduation from the University of Oklahoma School of Journalism. In 1973, Dolan’s entrepreneurial apprenticeship was ignited when publishing magnate Rupert Murdoch, founder of News Corporation, purchased the San Antonio Express-News, his first U.S. acquisition and the paper where Dolan was working as a reporter.

Until Murdoch transferred Dolan to Australia for several months so Dolan could learn the operations side of the newspaper business in preparation for being an editor, Dolan had no intention of leaving the newsroom. In Australia, he learned how decisions like holding the paper for late sports scores affected other departments, including circulation and advertising.

“Rupert thought that before I made a decision or gave an order, I should know the consequences,” Dolan recalls. “I came back to the U.S. better prepared to be a manager.” Murdoch eventually promoting Dolan to executive editor. Dolan was then sent to News Corporation offices in New York City, where he was put in charge of the group doing research and development on new media.

“That’s where I aggressively got into the finance world and the deal side of things,” Dolan recalls. “I didn’t have time to audit courses, so I got the syllabi from Columbia, Northwestern University, and the University of Chicago, and bought whatever business textbooks were assigned to students.”

Dolan left News Corporation in 1985 to run an online information company in Chicago. After a couple of years, he formed a small mergers and acquisitions partnership with a former News Corporation colleague; later, he joined a New York–based investment bank, quickly advancing to executive vice president. While in New York, Dolan met Cherry Tree founder Tony Christianson. The two struck up a friendship and began looking for opportunities to start a company in the media sector.

“We looked at everything—newspapers, magazines, newsletters, radio, TV—all across the country, and we found a very interesting opportunity in local business-to-business media,” Dolan says. “Our research indicated there were more than 600 little entities around the country, there were no big chains, and the margins were really high.”

The deal for Finance and Commerce was negotiated in New York; after the deal closed, Dolan relocated to Minneapolis. “We bought the second publication in Milwaukee a year and a day after the first one, bought the third one four months later in Baltimore, and it was off to the races,” Dolan remembers. These papers became the basis of Dolan’s Business Information Division, which now owns 64 newspapers in 21 markets.

Dolan jumped into the data business in 1995 when he acquired two Minnesota-based providers of public-records information. These companies were small, slow, and inefficient. Dolan’s team made the providers’ operations faster by electronically tapping into courthouses to gather each day’s credit information and delivering it to credit bureaus, major financial institutions, and credit card companies. Over the next five years, Dolan grew this operation from one focused on the nine-county metro area to a nationwide enterprise, referred to internally as the National Group.

Dolan says that he had no intention of selling the National Group, even when New York–based LexisNexis started calling. “I told them it wasn’t for sale the first six or eight times,” Dolan says. “Finally, in 2003, I named a big number, thinking it would scare them away, and to my surprise, they said, ‘Okay.’”

While the two divisions of the Dolan Company have separate management teams, they operate synergistically. They share leads and market with each other and occasionally pursue opportunities together. The Professional Services Division generates public-notice advertising, which regularly finds its way into the Business Information Division’s newspapers.

“We have cyclical and countercyclical businesses and we have geographical balance, so in any kind of economic cycle, we’re strong and we’re growing,” he says. “We are spitting off cash like crazy, which gives us, in these times, the capital to do things other people are unable to do. This is our third recession in this company; we plan for this kind of thing and we’re ready for it.”

Part of that planning was the decision to take the company public in August 2007, a decision Dolan doesn’t regret—despite the markets collapsing a month later.

“During our private years, we did 13 rounds of private equity raising and refinanced our debt too many times to count,” he says. “It was getting to be such a time drain that we looked for some other way to finance ourselves.”

Cherry Tree’s Christianson, who is now the Dolan Company’s lead director, describes Jim Dolan as “a great entrepreneurial CEO who has built a significant company, and one that will probably be more significant in the future. He’s not a one-trick pony.” That is, Dolan has built a business, and one that is capable of changing along with the opportunities that arise.

“In the very beginning, we were a newspaper roll-up company,” Dolan says. “Then we got into public records, did a nice divestiture of that, and everybody was very happy with the money. Then we got into services. I’m still thinking, ‘How far can this thing go?’ We’re not done yet.”