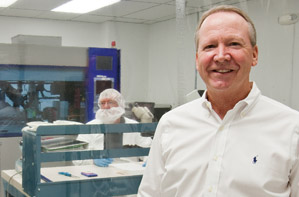 About 10 years ago, plastic surgeon Joseph Gryskiewicz sought a better, faster way to close his patients’ incisions. Any surgeon will tell you: The faster you can close surgical incisions, the better. Quick closures help prevent postoperative complications and help keep costs down.

Back then, surgeons either sewed incisions shut with absorbable surgical thread (suturing) or stapled them shut with metal staples. Both techniques are still widely used today. Neither is ideal. Suturing yields a good cosmetic result, but necessitates lots of needle sticks for the patient and tedium for the surgeon. Metal staples can be inserted quickly, but leave an unsightly “railroad” pattern on the skin and require a follow-up trip to the doctor’s office for a sometimes painful removal process.

Gryskiewicz’s idea: combine the quickness of staples with the better aesthetic results of suturing by developing an absorbable staple. He founded a company called Fastitch in November 2000 to develop such a product.

“In many respects, it was a typical medical device deal, in which a doc founder has an idea, raises money, and then we find out that doc’s idea doesn’t work, and we have to start from scratch,” says John Shannon, CEO of Plymouth-based Incisive Surgical, Fastitch’s successor company.

Investors were willing to give the company a second chance. Shannon and his team raised $30 million to develop a new product. Five years later, the newly renamed company released its Insorb product line, comprising a stapler and absorbable stapler. The Insorb stapler works by grabbing on to subcutaneous tissue on both sides of the incision simultaneously, pressing it together, and “staking” it with the staple. (See illustration at right.)

“There’s not another company in the world that has our technology,” Shannon asserts. “Insorb’s primary benefit is speed in closure, but it’s also a more patient-centric solution.”

Shannon says that James Peterson, Incisive Surgical’s vice president of advanced development, was the principal inventor of Insorb, although the entire team contributed. (That team includes Gryskiewicz, who remains on Incisive’s board of directors and is a clinical professor at the University of Minnesota Academic Health Center).

Incisive Surgical’s staples are made with the same copolymer used in absorbable sutures. This copolymer is made from a kind of sugar—not the sweet stuff, but related carbohydrates with more complex structures. Over time, body heat and moisture break these copolymers down into smaller chemical structures that can enter the body through the skin.

“Our product’s primary benefit is time,” Shannon says. “Dr. Nancy Guttormson, a general surgeon here in town, says that the use of our stapler reduces the time it takes her to close the incision on a breast by 10 to 15 minutes. If she is doing a bilateral mastectomy, obviously that’s 20 to 25 minutes, and that’s pretty compelling.” In addition, Shannon adds, “We have some papers that demonstrate that we may have a lower surgical-site infection rate.”

Incisive Surgical has sold more than 550,000 staplers, both in the U.S. and in more than 20 other countries. “One of our biggest challenges is that surgeons are very conservative,” Shannon says, “I use an analogy of an airline pilot. If an airline pilot lands a plane in a certain way and the passengers walk off safe and sound, then he’s going to keep landing the plane that way. Surgeons are the same way.”

Adding to the sales challenge: “We’re the little company,” Shannon says. “And as much as it’s great being the only ones in the world with this technology, the voice that we can sound out there is very difficult for a lot of doctors to hear versus the 800-pound gorillas, like the Johnson & Johnsons and the Covidiens, who sell absorbable suture and metal staples.”

Incisive’s 2009 revenues were $5 million; this year, Shannon hopes to be closer to $7 million, with sales fueled by a new, more user-friendly version of the stapler released in June 2009. Eventually, the company would like to see an Insorb stapler on every suture cart—in doctors’ offices as well as in operating rooms.

“Right now, our product is designed to close longer incisions in the OR,” Shannon says. “But longer term, we’d like to extend the technology for use in shorter incisions, for virtually all types of skin closure.”