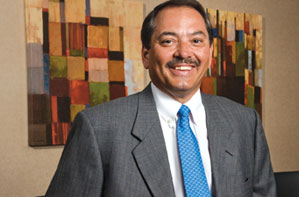 At 51, Guy Mingo may seem rather young to be inducted into the Minnesota Business Hall of Fame. But he’s always lived ahead of schedule.

Mingo quit high school at 16 to work full time. Three years later, he became Marsden Building Maintenance’s youngest-ever district manager, responsible for almost 25 percent of the company’s revenue. At 23, he was a husband, father, and homeowner; at 24, promoted to vice president of operations; at 42, made CEO of St. Paul–based Marsden Holding, LLC, now one of the largest privately owned facility service providers in the U.S. With services including office cleaning, building security, and HVAC system maintenance, Marsden currently owns 12 companies operating in 32 states; last year, it posted revenues of $110 million. For the past three years, Marsden Holding has had record growth in income.

Since becoming CEO in 2002, Mingo has led the company through a whirlwind of acquisitions, with the goal of doubling in size every five years. The recent economic downturn has left him champing at the bit. “I wanted to reach $250 million in revenue by the end of 2010, and had the market not changed, we would have been well past it,” he says. “We weren’t ready to slow down.”

Mingo was raised in north Minneapolis, one of six kids. “I came from a broken, alcoholic home, and grew up on welfare,” he recalls. He got his first job at a convenience store in the neighborhood, and happily quit school to work 16-hour days, six days a week.

Storeowner Monroe Hordoff took Mingo under his wing, entrusting him with the job of night manager. “I was a pretty quiet kid,” Mingo recalls. “But at the store, I met customers from all walks of life, and I got excited about serving people. Monroe taught me: If you’re going to do something, do it in a quality way or don’t do it at all.”

When business slowed at the store, Mingo’s girlfriend since middle school (and now wife of 29 years), Patsy Riddle, urged him to join her at Marsden Building Maintenance. He started as a part-time janitor, cleaning the Hennepin County Government Center in Minneapolis. But he moved up quickly, from managing six cleaners at the downtown Minneapolis Radisson hotel to overseeing the 125 workers who cleaned 5 million square feet of office space every day in the southwest suburbs.

Mingo recalls that when he first met company founder and CEO Skip Marsden, Sr., he was careful not to reveal his age. (Marsden himself had left home at 15 to join the Merchant Marine.) The two men hit it off, and Mingo had another mentor.

“Skip would give the shirt off his back to anyone who needed it, to anyone who was the underdog,” Mingo recalls. “With Skip, everything had to be top quality. He was a hard driver and passionate, but he also had fun. We hunted and golfed together for more than 20 years.”

In 1995, Marsden promoted Mingo to president of Marsden Building Maintenance, a $25 million business that was growing fast, adding two or three large accounts every month. With its purchase of two small local janitorial companies, Mingo got his first taste of growth through acquisition. With Marsden’s successful purchase of Milwaukee-based Clean Power in 2000, Mingo believed that his company could become a “hometown team with national strength.”

“The decision to grow our footprint was about survival,” Mingo says. “As the economy became more global, we found ourselves up against national companies in bidding. We were losing long-term building-maintenance customers because the hiring decision wasn’t local anymore.”

Mingo says that Skip Marsden was reluctant to take the risk of expansion. “But I pushed him pretty hard,” Mingo recalls. “I felt confident that if we picked the right companies, who shared our values, we would succeed. Buying Clean Power showed Skip we could do it. They doubled in size the first five years we owned them.”

In 2002, Marsden sold his company to Encore One, a trust established by the Rauenhorst family. He recommended that Mingo become the first CEO of the newly created Marsden Holding, comprising Marsden Building Maintenance, Clean Power, and American Security (purchased in 1976). “I was very excited to be CEO, and scared at the same time,” Mingo recalls. “Truth be told, being scared was not that uncommon for me. But I had so much drive to succeed, I guess failure was something I always feared more.”

From 2003 to 2007, Mingo oversaw the acquisition of 21 companies. “We looked for larger-platform companies, with $10-plus million in revenue, in markets that had a lot of growth potential,” he says. Smaller companies in existing markets were folded under Marsden’s local brand. Larger companies were allowed to keep their names and management teams, as long as they met Mingo’s ground rules: adherence to the Marsden code of conduct (pledging to run their businesses ethically and to treat their customers and employees fairly), and a commitment to grow their businesses by a minimum of 10 percent each year.

Mingo encourages Marsden Holding companies to grow “organically,” with local, feet-on-the-street sales teams that know their communities. “If I don’t like the way something is going, I can get deeply involved,” he says. “But I like them to have the latitude to do it their way.”

Tom Marek, a partner at Oppenheimer, Wolff & Donnelly and the mergers and acquisitions counsel for Marsden Holding since 2001, says that “Guy’s got quite a combination of terrific qualities. He’s got the vision to move his organization forward and grow, as well as the skills he needs to manage day-to-day operations. He’s really an everyman—able to communicate easily with his employees, his peers, and the business owners he’s trying to woo.”

Mingo, Marek adds, “expects you to perform at a high level. He makes that clear. You definitely want to be Johnny-on-the-spot and ready to go when you’re working with him. But he’s also fun, quick to put things in perspective, and makes sure we look at the bright side, the fun side of things.”

Mingo points out the fact that more than 90 percent of Marsden Holding’s managers started out as cleaners. The path to advancement at Marsden is transparent: Every step to every job is mapped out in the “Career Pathways Manual”—and everybody knows the top boss’s story.

“I tell our employees that working at Marsden isn’t just a job, and they should never be embarrassed to do a cleaning job,” Mingo says. Most of Marsden’s work force, he adds “comes in at entry level. A lot of them are uneducated; most are unaware that they can ever do anything more than just be a cleaner. But they find out when they get in this organization that that’s the furthest thing from the truth.”