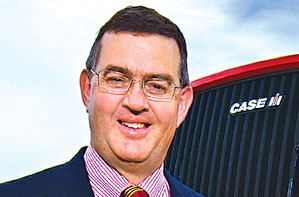 After graduating from the University of Minnesota in 1975, David Meyer took a job as a four-wheel-drive product specialist at construction and agricultural equipment manufacturer J. I. Case (now Illinois-based CNH Global). He traveled through the Dakotas, Minnesota, and Montana, making calls on Case dealers.

“On one of my first dealer calls, the dealer sold a customer a new four-wheel-drive tractor and made more money on that deal than I was making in a whole year,” Meyer recalls. “I figured I was on the wrong side of this thing.”

Six months after starting with Case, Meyer left to take a job with a small dealership in Wahpeton, North Dakota, selling Case and New Holland farm equipment. The owner had no succession plan and the dealership served a huge market in the heart of some of the world’s best farmland. Joining the Wahpeton operation positioned Meyer for his future career.

From the beginning, Meyer had his sights set on owning his own dealership. He bought a minority interest in the Wahpeton shop in 1976; four years later, with that dealership as the foundation, Meyer formed the C corporation that eventually would become Fargo-based Titan Machinery. After years of acquisitions, Titan is now a “dealership complex” that owns and operates 67 individual stores and three outlets throughout the Upper Midwest.

Starting an agriculture-related business in the early ’80s was a tough row to hoe, given the record high interest rates, a 10-year drought, and farmers going out of business faster than you can say, “Grain prices dropped again.” Meyer was undeterred.

“There were 70 miles in between dealerships for the Case brand at that time, so it had a fairly large market potential,” he recalls. “I was very determined and relentless in pursuit of the market, and I always made sure I gave the customers the absolute best parts and service support possible. After a few years of doing that, the market starts coming your way.”

Despite the difficulties starting up, Meyer knew the agriculture machinery dealership market would be consolidating. “There were going to be far fewer dealerships, the farms were going to get larger and fewer, and they were going to get more sophisticated,” he says. Equipment was getting more mechanically and electronically complex, and farmers needed dealers who could sell and repair that equipment knowledgeably—something older dealers weren’t always able to do.

Meyer took Titan Machinery public in December 2007; due to market demand, he conducted a follow-up offering in May 2008. His company now flush with cash, Meyer sees more opportunity ahead.

“You’re seeing aging dealer-principals, a lack of succession, and a huge increase in the cost and sophistication of farm machinery,” he says. “On top of that, there’s a financial crisis and a tightening of credit. You can imagine a 65-year-old, mechanically minded dealer-principal who never went to college and took over for his dad, and all of a sudden he’s facing today’s computerization and capitalization requirements. You put all of that together, and you’re going to see huge consolidation taking place.”