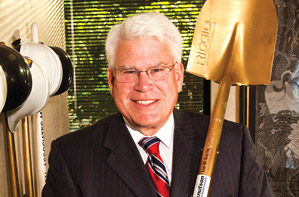 His Minneapolis-based company acquires, develops, finances, and manages a growing collection of Class A medical office buildings, multiple-specialty clinics, and ambulatory care centers for large institutional customers across the country. Frauenshuh currently has more than 4 million square feet under management.

In spite of a tough economy, that square footage continues to grow. In the first quarter of 2010, Frauenshuh broke ground on three medical care facilities in Texas, California, and Washington state totaling 315,000 square feet. Before the year is out, construction will have begun on eight more projects totaling 680,000 square feet in five states, including the 300,000-square-foot Virtua Voorhees Ambulatory Care Center in New Jersey.

This 20 percent growth in properties under management will follow the September 2009 opening of the 225,000-square-foot Virtua Health and Wellness Center in New Jersey; and the May 2010 unveiling of the 90-bed Bellevue Medical Center Hospital in Omaha, along with an adjacent 58,000-square-foot medical office building.

Frauenshuh saw the writing on the drywall in 1987, four years after opening his firm. As he continued to develop new commercial properties in the Twin Cities, he grew aware that the market was becoming overbuilt, profits were drying up, and the management services he was offering had been reduced to a commodity. The most appealing new opportunity was medical facility development.

“There was a hard portal of entry because of the scrutiny of the doctors and the institutions that own the hospitals,” Frauenshuh says. What’s more, the demographics of an aging population were favorable.

In 1987, Frauenshuh’s company did its first medical project, a Bloomington clinic for Park Nicollet (which remains a Frauenshuh client). These days, medical facilities, whose development costs range from $10 million to $100 million per project, account for about 90 percent of Frauenshuh’s $102 million in annual revenues. These facilities are developed and managed by a division called Frauenshuh Health Care Real Estate Solutions.

Frauenshuh also operates a commercial division, which provides real estate services to the company’s nonmedical clients, most of whom are located in Minnesota. The project costs for Frauenshuh’s commercial clients, which included Schwan’s, Bremer Banks, and Park Dental, typically range in cost from $5 million to $20 million.

Traditional developers hire construction and architectural services, but mix their fees and profits from construction, architecture, and development together, which makes it difficult for customers to know their true costs. “We sit on the same side of the table as our client, so we are never in dispute as to who is making what profit and where,” Frauenshuh says.

That financial transparency explains why Frauenshuh has been able to build a real estate empire that annually generates volume between $300 million and $1 billion of development projects with just eight primary medical clients. “The value is in the customer, not in what you own,” he says. “We make our money in the owning and developing of the real estate, and we share what we’re making with our customers. We have doctors who participate in the ownership of the facilities across the country, and we tell them what our return is going to be ahead of time.”

Steve Faber, owner of Minneapolis-based KM Building Company and partner with Frauenshuh on a handful of office building and condominium projects, says that with Frauenshuh, “his word is his bond.”

“If you are active in the commercial real estate business, how could you not know David?” Faber asks. “David developed the entire LaSalle Plaza block in downtown Minneapolis and more recently the entire block in St. Paul that Lawson Commons occupies, including the parking structure.”

LaSalle Plaza, which was started in 1985, was the first project Frauenshuh’s company worked on from scratch. In the course of assembling that block, he bought the State Theater for $4 million, then set his sights on smaller neighboring buildings.

“I walked into a bar on Hennepin Avenue that butted up against the State Theater,” he recalls. “The owner said, ‘Yeah, I’ll sell my building.’ This guy was a character. He told me that he repossessed airplanes for a living, including Idi Amin’s plane. He says, ‘If you don’t think I’m tough, I’m tough. You got any guts? We’ll put figures up on the dartboard from $4 million to $7 million; whatever the dart lands on, that’s what I’ll sell the building for.’ His land was worth about $2 million, so I said, ‘Do you have any guts? We’ll start at $1 million and go to $7 million.’ Well, he wouldn’t do it. The city ended up taking the bar under eminent domain.”

Frauenshuh had taken on Qwest predecessor U.S. West as a controlling partner in the LaSalle Plaza project. But when the communications company decided to get out of the real estate business in 1991—the same year the complex was completed—he was forced to sell the $110 million building for $70 million. A year later, the buyer flipped it for $110 million. “To my knowledge, that’s the only building I’ve ever sold for a loss,” Frauenshuh says.

Frauenshuh avoided a similar problem two years ago, when he began liquidating his 1.5 million square feet of commercial real estate in St. Paul. He was the largest landlord in the Capital City at the time. “I sold because it was obvious . . . that there was an oversupply of capital driving prices,” he recalls. “Prices were not being driven by demand of product but by an oversupply of easy credit.” Though he sold off his downtown St. Paul holdings, his company continues to manage the Lawson Commons complex.

Outside of his business, Frauenshuh helped establish the Frauenshuh Cancer Center at Park Nicollet Methodist Hospital in St. Louis Park. He also serves on a number of boards, including the national Salvation Army, the Military Family Foundation, and the Federal Home Loan Bank of Des Moines.

Frauenshuh has no plans to retire from his work. “Why would I think, ‘I can’t wait to stop doing what I love’?” he says. “You’ve got to spend your time somehow, and by continuing to work I can help more people.”