Cirrus Aircraft. His vision of a personal plane that anyone can fly revolutionized an industry.
April 01, 2020 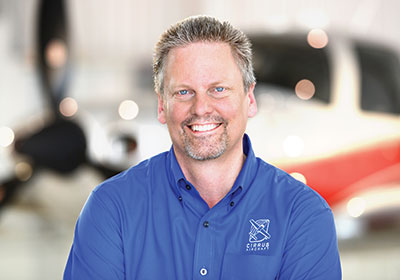 Dale Klapmeier glances through his office window at Duluth International Airport’s long runways, recalling how much they helped over the years give his personal aircraft business plenty of room to not only take off, but transform an industry. And Cirrus Design looks poised to transform it once again.

The company he and his brother Alan founded more than 30 years ago made its name with its SR20 and SR22 single-engine turboprop planes with built-in parachutes. With Alan Klapmeier departing in 2009 to start a new company, Dale has since piloted Cirrus through heavy turbulence—the Great Recession, then acquisition by new investors. Now, with sales and headcounts rising again, he’s preparing to launch the Vision SF50, a “personal jet” that can be flown by someone who needn’t be a professional pilot. It, too, has a parachute built into its tail section. Cirrus (dba Cirrus Aircraft) already has more than 500 pre-orders for the seven-seat jet, which will cost about $2 million each and could open up new markets for the company.

The Vision SF50 will build upon an already impressive legacy. In 2001, Forbes magazine described Cirrus’ SR20 and SR22 planes as “the first genuinely new planes in the sky in many years” shortly after they hit the market. Cirrus’s aircraft were designed to be “intuitive to fly,” Klapmeier says. Flat-panel screens with GPS digital mapping and fuel gauges are “depicted in a way that is very easy for the pilot to understand,” he notes. The design also includes lots of windows, including one in the back, which he says can help reduce airsickness for passengers. In other words, Cirrus planes have been designed to make flying feel more like driving or riding in a luxury car.

The component that earned Cirrus’ planes the most attention early on is the parachute. It was an innovation born of tragedy. In 1985, Alan Klapmeier was hit in a midair collision. While he was able to land his badly damaged plane safely, the pilot of the other plane was killed. Dale Klapmeier describes the event as traumatic and life-changing for both of them. “It drove us from the invincibility that we all felt, both as kids and as pilots,” he says. And it made safety a focus in the brothers’ plane designs.

Cirrus Aircraft’s origins date back to 1984, when the Illinois-born Klapmeier, who grew up “dreaming, thinking, breathing airplanes,” co-founded a business in the central Wisconsin city of Baraboo, designing kit planes—personal aircraft that buyers would assemble themselves. The brothers’ design was “big, comfortable and safe,” Dale Klapmeier says. It was also “complex and difficult to build.”

But while the project failed as a kit plane, its distinctive design attracted a tremendous amount of attention in the small-aircraft community, Klapmeier says. Word of the design reached the ears of an Israeli aviation investor. He liked what he saw so much that he bought the rights to produce the Klapmeier-designed plane in Israel. When the contract with the investor ended in 1994, the Klapmeiers chose to manufacture planes themselves. They moved the company to Duluth, lured by financial enticements, the local workforce and a small-city airport with big-city amenities, including a control tower and those long runways, which make the airport ideal for testing planes.

To lift its manufacturing operation off the ground, Cirrus attracted funding from Arcapita, the investment arm of the First Islamic Bank of Bahrain, which became Cirrus’ majority owner in 2001. “They pushed us to grow very fast,” Klapmeier recalls. In 1999, Cirrus built nine airplanes. In 2006, it launched more than 700.

Then suddenly, it looked as if it might crash. At the onset of the recession in October 2008 “we couldn’t give an airplane away,” Klapmeier recalls. Arcapita didn’t have additional funds to put into Cirrus, and its production plummeted to around 250 planes per year from 2009 through 2013. In 2009, Alan Klapmeier departed Cirrus to start Kestrel in order to manufacture an all-composite, six-seat turboprop plane. (The Superior, Wis.-based company, now called ONE Aviation, has yet to begin production.)

Dale Klapmeier was forced to shed dozens of employees as he found ways to keep Cirrus aloft. He also found new financing: In 2011, China Aviation Industry General Aircraft (CAIGA) acquired the company and provided it the financial stability it needed to not only ramp up plane production, but to advance development of its personal jet.

“Financially, the last couple of years have been great,” he says. Cirrus has hired more than 300 employees since 2012. Its annual production numbers soon could return to pre-recession levels. And its Vision SF50 jet, which he says is scheduled to be FAA-certified by the end of 2015, is being well received in the marketplace. (Production of the jet will require adding floor space. Whether that will happen in Duluth is unclear as of this writing: Cirrus has requested $4 million from the state to help it add a new production facility.)

Even with the continued good fortune at Cirrus, Klapmeier admits he’s still surprised that “we were able to pull this off—kids that started in a barn in southern Wisconsin.” Despite all the struggles and some long, hungry years, “we were able to build an extraordinary team of talent that made it possible to take the step into certified production aircraft,” he says. “We designed a product that turned into the best-selling airplane in the industry.”